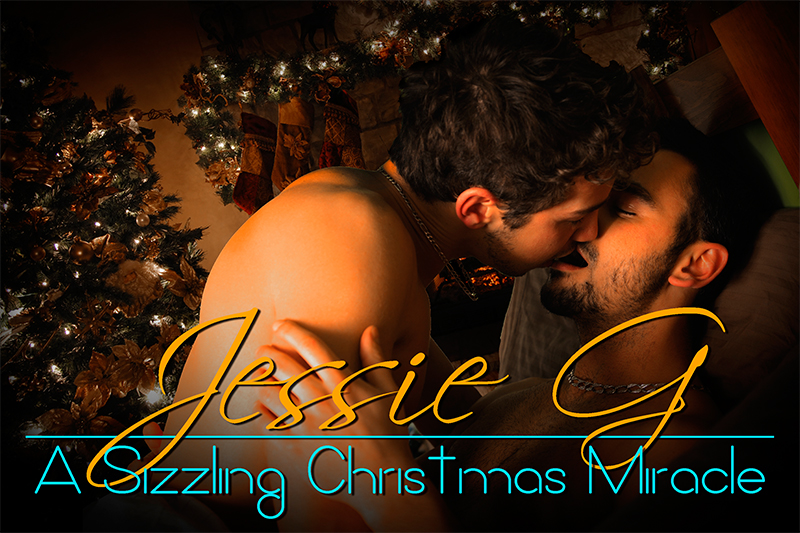 I was going through files on my laptop and found a Christmas scene that I wrote some time ago for Davin and Alaric. It’s as much a surprise to me as it is to you since I had no plans to write one. If you haven’t read Past Hurts, its currently on sale for $1.99 at Amazon, B&N, KOBO and ARe.

“Do you plan to sleep all day?” The question vibrated through him as Davin nuzzled beneath his balls and along his taint, waking him instantly. Big hands slid under his thighs, pushing them up and out as that talented tongue worked its way down his crease. Those dark bedroom eyes flashed up, filled with longing, and Alaric could only marvel at the differences in his boy. It was Christmas again, exactly one year to the day that Davin walked back into his life. Each day since, he’d seen Davin shed the heavy responsibility he’d been carrying for so long, letting go of past hurts and discovering new passions.

The endless possibilities had Davin declaring everything brand new which made this their very first Christmas together. They’d wiped their calendars, packed their bags, and secluded themselves in a little chalet in Colorado. The world around them was kept at bay by a forest of evergreens and a veil of snow. With a twinkling tree, a roaring fire, and all the supplies they could need for a week, it was pretty close to heaven on earth.

“May I?” Davin whispered.

Those two words had the power to take him from the sleepy stirrings of lust to desperate, clawing need. They were magic. “May you what?”

“May I put my tongue in your ass, please?” The last year had changed them in so many ways. The lifestyle they danced around so many years ago had become their foundation. Davin said it made him feel safe, and in a lot of ways Alaric got the same security from it. Control, the give and take of it, and the acceptance of each other’s roles…it was a second chance neither would take for granted.

Alaric smiled at Davin, loving the vision of him nestled between his thighs. “Yes, you may.”

And then Davin was, lapping and pressing and easing his way into that tight ring until he was tongue fucking Alaric into oblivion. “May I put my fingers in your ass, please?”

“Yes, you….fuck,” Davin pressed, lapping to keep his fingers slick as they eased inside, one finger and then two. It was all Alaric could do not to come as he felt those magic fingers brush his prostate. Over and over they stroked, fucking him, opening him, and proving that Davin knew just how to work him.

“I want….I mean…May I put my cock in your ass, please?” The stuttering request coupled with the pleading in those dark eyes nearly undid him. Davin was his Christmas miracle. In their entire relationship he could count on one hand the number of times Davin asked him to bottom and Alaric never refused, though it wasn’t his preference. Each time he loved the feel of that possession, loved seeing Davin’s aggression.

“Yes, you may.” Davin rose up, his fingers still working Alaric’s ass, as he reached for the lube on the side table. “Do you want me on my knees?”

When he fumbled with the bottle, Alaric took it, popped the top and prepared his lover. Beneath his touch Davin shook, well aware of the implication of Alaric preparing him. Then, with a hand behind each knee, Alaric offered himself. Shifting between those wide spread legs, Davin lined up and pressed in. It was all he could do to go slow, easing down as Alaric bore into the thrust until he was seated balls deep. Tilting his hips up, Alaric wrapped his legs around Davin and waited for him to move.

“I love all your strength,” Davin whispered as he pulled out slowly, almost all the way, while he watched. “I love how you strip me down until I’m nothing but the hot tangle of emotion I feel for you. Even here, buried inside you,” he thrust hard, deep, without hesitation, “I feel your ownership.”

“I see…” The words trailed off as Davin thrust again. “I see you. Fuck me, Davin, own me back.”

The breath rushed out of him as if Davin had been holding it, afraid of the answer he’d get. Then he gave them what they both wanted, both needed, pounding down as Alaric buffeted his body, proving that they owned each other.

“Only you….” The words were barely coherent as he tried to express that he’d only ever let Davin inside. It must have made sense because Davin’s thrusts became harder, faster, as he leaned over to kiss him. The aggression had him now, it was in the hard pounding of his cock and the equally hard thrusting of his tongue in Alaric’s mouth, and the hands that pinned his to the mattress. “Yes, fuck me, yes…”

As close as Alaric was, the request was confusing. “Wh…”

That made even less sense. Alaric pulled back so he could see Davin’s face, trying to understand what his lover needed. “Dav, what?”

Now that he was totally on board with. “Yes, yes.”

Davin gazed down at him, his dark eyes begging Alaric to understand. “And then…I want you to fill me up…own each other. Please, Ric.”

“Is this what you want, lover? My cock rammed so far up your ass there is no way to tell where you end and I begin.” There was no pause, no hesitating, each word punctuated with a hard pounding thrust.

‘Never, never.” The orgasm hit him hard and all Alaric could do was hold on to his lover and be thankful. ”I love you, baby. I love you.”

Some of the haze lifted from Davin’s eyes as he smiled. Strong arms held him tight as Davin whispered, “I love you so much, Ric. Merry Christmas.”

One thought on “A Sizzling Christmas Miracle!”