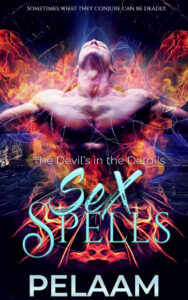 Sex spells… Sometimes what they conjure can be deadly.

After being dumped by his latest boyfriend, Aiden lets a friend talk him into visiting a sex spells shop to get a spell or charm for good luck in love. The charm appears to work when he meets Lyall, the man of his dreams.

Garen, a special investigator of paranormal activity, is called in when a victim is found burned to death in his bed. With the help of his husband Luke, he looks for the link between subsequent victims to discover how to stop the demonic power that’s killing them.

When they find the link is Aiden, who is being used by a practitioner of the dark arts to conjure a demon of fire, it becomes a race against time to save him from becoming the final victim and thereby unleashing one of the most powerful fire demons ever known.

While Luke must try to protect Aiden and Lyall from a demonic force, Garen must face the demon’s summoner.

Reader advisory: This book contains scenes of violence, descriptions of corpses and some homophobia from a minor character.

4✨s by Abrianna
I found this book to be unique in more ways than one. Not only is it about two different couples, but also has a unique spin on paranormal elements. In a world where the market is saturated by all kinds of stories about demons and their evil summoners, it was nice to read something completely different.

My heart went out to Aiden. He was hurt many times in his life and this time was no different. He was taken advantage of and used to summon a powerful demon. There’s only so much one person can take, but he had the support of his new boyfriend, Lyall to help give him the strength to deal. Even though the two of them were together because they belong together, some aspects of their relationship felt too rushed. It could be because of the danger they were in, but the development between them fell a little flat for me, though on their own they seemed to be well-rounded characters.

Garen and Luke race against time in this book to help both Lyall and Aiden and I really liked them. They have a working relationship that makes them the ideal pair to deal with this situation. They were understanding from the get-go and it was easy to like them. Maybe it was because they were already established, but I thought they were more thought out than Lyall and Aiden were as a couple.

While I thought the plot was very unique and well done, especially with having four different characters, the writing at times fell a little flat for me. There were times where I felt it dragged, especially during the more mundane scenes, but other than that it was okay.

This book is supposed to be the first in a series and it could be interesting if the author keeps developing their world and writing characters that are well-rounded as these ones were at times.

About the Pelaam
Living in clean, green New Zealand, Pelaam is a multi-published author of gay romance and erotica. When not working at writing, Pelaam likes to indulge in her other passions of cookery and wine appreciation.