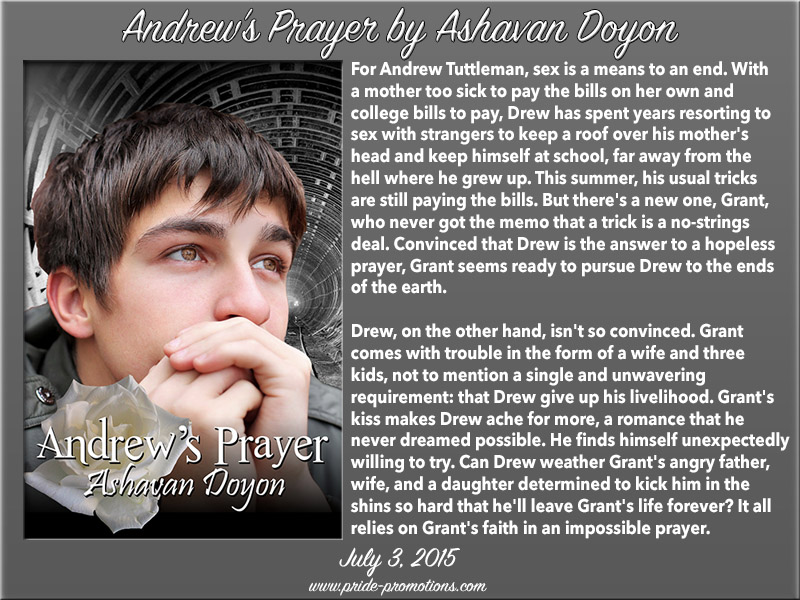 Blurb:
For Andrew Tuttleman, sex is a means to an end. With a mother too sick to pay the bills on her own and college bills to pay, Drew has spent years resorting to sex with strangers to keep a roof over his mother’s head and keep himself at school, far away from the hell where he grew up. This summer, his usual tricks are still paying the bills. But there’s a new one, Grant, who never got the memo that a trick is a no-strings deal. Convinced that Drew is the answer to a hopeless prayer, Grant seems ready to pursue Drew to the ends of the earth.

Drew, on the other hand, isn’t so convinced. Grant comes with trouble in the form of a wife and three kids, not to mention a single and unwavering requirement: that Drew give up his livelihood. Grant’s kiss makes Drew ache for more, a romance that he never dreamed possible. He finds himself unexpectedly willing to try. Can Drew weather Grant’s angry father, wife, and a daughter determined to kick him in the shins so hard that he’ll leave Grant’s life forever? It all relies on Grant’s faith in an impossible prayer.

Excerpt:
Andrew Richard Tuttleman approached the ramshackle cinderblock house cautiously. There was another car parked in front, off the side of the road,

and his mom didn’t drive. The voices inside were loud, and not in any sort of good way. Drew’s car was parked in the driveway, filled with suitcases and a few boxes that he’d left there. He’d stored more back at the University, but he wasn’t certain just what sort of reception he’d get. Not now that his mom knew.

Coming home hadn’t been a difficult choice. Sure, it was over a thousand miles. Sure, it was going to be hot, sticky, and miserable. It was still home. His mom was the only person in his life who’d said “I love you” that he had believed. She’d even said it after she found out. She’d been in tears, she’d screamed. But she’d still said “I love you,” and Drew never doubted for a moment that she’d meant it.

The screaming in the house got worse. It took only moments for Drew to reach the house and fling open the door. Any other time it would be kept locked in a self-delusional attempt to pretend safety, but the three chains that helped secure the door hung limply from the wall. A towering white man with a bushy black beard and a shaved head stood threateningly over Drew’s mom. He was in jeans and leather vest — no shirt.

“I done gave you your extra week. Now where’s my fucking money, b–”

“Don’t you dare finish that,” Drew said. He felt his leg for the comforting distension the knife he always carried made in his pants.

About the author:
Ashavan Doyon spends his days working with students as part of the student affairs staff at a liberal arts college. During lunch, evenings, and when he can escape the grasp of his husband on weekends, he writes, pounding out words day after day in hopes that his ancient typewriter-trained fingers won’t break the glass on his tablet computer. Ashavan is an avid science fiction and fantasy fan and prefers to write while listening to music that fits the mood of his current story. He has no children, having opted instead for the companionship of two beautiful and thoroughly spoiled pugs. A Texan by birth, he currently lives in New England, and frequently complains of the weather.

Ashavan went to school at the University of Massachusetts at Amherst, getting his degree in Russian and East European Studies, with a focus in language and literature. He has two incomplete manuscripts from college that he goes back compulsively to fiddle with every so often, but is still not happy with either of them. He still loves fantasy and science fiction and reads constantly in the moments between writing stories.

Ashavan loves to hear from readers and can be reached at ashavandoyon@gmail.com