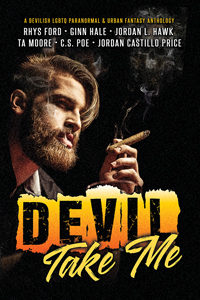 Temptation lurks around every corner in worlds sometimes dark, sometimes lurid. Giving in is both dangerous and satisfying, though never in the ways one expects. While these enticements offer a vast range of benefits and boons, the cost is a soul and the devil expects his due. Sometimes suave and charming or calculating and cruel, these devils have schemes and desires of their own. They can be creatures to run away from… or toward.

Join the most unique and celebrated authors of LGBT urban fantasy and paranormal fiction for a fast-paced and unpredictable ride, from a city on the other side of reality, to a world suspended in dusk, to a twisted version of the 1960s and 70s.

Meet devils in top hats and waistcoats, a defrocked motorcycle-riding priest, and a genderfluid antihero—among many more. Full of humor, romance, horror, action, intrigue, and magic, these stories have one common element….

They’re one hell of a good time.

4✨s – internal Affairs By Jordan L Hawk – Oh Lordy, the first meet between Chess and Ralgath was hilarious. Chess is such a character. They had me smiling from the moment they opened their mouth. I could hear their smooth drawly voice in my head. I felt kinda bad for Ralgath, he got played and screwed over even if it wasn’t intentional. The whole story had a really good flow to it and the byplay between Chess and Ralgath was fun. Ralgath and Chess were fun engaging characters and the story was highly entertaining.

Collared by T.A. Moore – This was a very entertaining story. Jack and Math are very engaging characters. This story is unlike anything I have ever read before. Through most of the story I can’t decide whether Jack loves or loathes Math, by the end I think it’s a mixture of both. While the story was entertaining I did have some trouble feeling the relationship between Math and Jack. All in all, though it was a well-written story.

Counterfeit Viscount by Ginn Hale – Such a great story. Archie and Nimble were so great. I was a little confused as to what Nimble was, but I ignored that thought and just enjoyed the story. The mystery in the story was well done and easy to understand. I was immediately drawn in and stayed it. Very happy to have read this story.

11:59 by C.S. Poe – This is a story that will make it scary to fall asleep and dream. Asuka and Merrick were great characters. CS Poe did an excellent job with making you fell Asuka’s apathy and despair with not being able to dream. Merrick was like a breath of fresh air in the story. The story was dark and gritty and that was conveyed very well. It was an interesting tale and was enjoyable to read. Like with everything CS Poe writes once I started the story I couldn’t stop. Very well done.

Wonderland City by Rhys Ford – This was an awesome story that took an existing story and expanded on it from a different perspective. I have to be honest and I have never read Alice in Wonderland and vaguely remember the movie, but this was a dark and gritty tale set in that world. As always with Rhys Ford her description of her characters and the world they live in was amazing. Xander was an interesting and entertaining character. His personality was so fun to read about and I love how he interacted with the other characters in this story. The twisted world Rhys created was surprising and new Another excellent story by this author.

Dark Favors by Jordan Castillo Price – I’ve not read a lot by JCP but this was a story that convinced me that I need to check out more of her work. Johnny and Adam were great characters and very well written. JCP did an excellent job writing a character that was easy to understand and kept your interest. The interactions between Johnny and Adam were twisted and absolutely awesome.

All in all this was a very well done anthology. Each story fit the overall theme of the anthology and kept me interested. This totally felt like it could be an hour-long tv show of short stories that played around Halloween. Getting a powerhouse group of authors together in one book was such a good idea and I am so happy that they did this. Brilliant book.