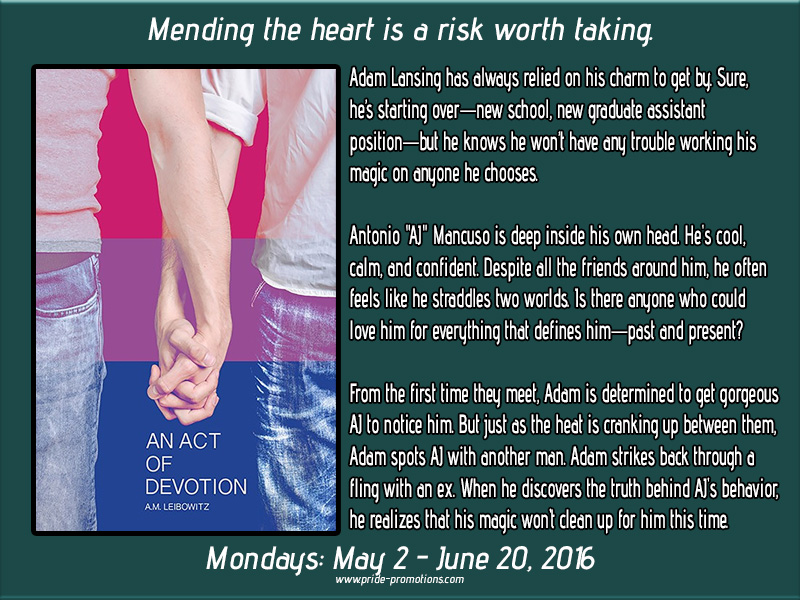 Today I’m very lucky to be interviewing A.M. Leibowitz, author of An Act of Devotion. Hi, A.M., thank you for agreeing to this interview. Tell us a little about yourself, your background, and your current book.

I’m an author and editor by day, a spouse, parent, and activist by night. An Act of Devotion is my fourth novel. It was inspired by the work many of my fellow activists are doing. I usually write literary LGBTQ+ fiction with relational themes (love, friendship, family). This is my first genuine romance.

Blurb:
Adam Lansing has always relied on his charm to get by. Sure, he’s starting over—new school, new graduate assistant position—but he knows he won’t have any trouble working his magic on anyone he chooses.

Antonio “AJ” Mancuso is deep inside his own head. He’s cool, calm, and confident. Despite all the friends around him, he often feels like he straddles two worlds. Is there anyone who could love him for everything that defines him—past and present?

From the first time they meet, Adam is determined to get gorgeous AJ to notice him. But just as the heat is cranking up between them, Adam spots AJ with another man. Adam strikes back through a fling with an ex. When he discovers the truth behind AJ’s behavior, he realizes that his magic won’t clean up for him this time.

Excerpt:
Inside the one-floor building, there were half a dozen other students. Two of them were going through boxes; they looked like undergraduates on work study. Two were sitting in chairs in the waiting area, probably to see the nurse practitioner in the back offices. One was flipping through brochures in the rack on the wall, and the last one was behind the desk. When Adam saw him, his jaw nearly hit the floor.

The man—because this was absolutely not one of the gangly, barely-adult boys in abundance on campus—was gorgeous. No, not merely gorgeous. God-like in his stunning beauty. He was practically a work of art. His skin was bronze, and he had a mass of thick, almost black hair that lay in heavy waves. Under long lashes, his dark eyes shone, and his lips were full and pink. He wasn’t quite clean-shaven, and the light, purposeful stubble oozed attractive masculinity. Even seeing only his upper body, it was obvious he was muscular and toned in a way Adam barely aspired to be. 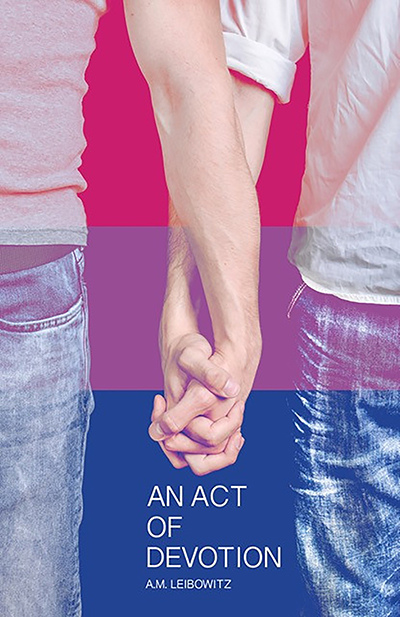 Adam wasn’t one to be overly concerned about the packaging when it came to love—or lust, as the case might be. Hot people were hot people, in his opinion. As long as everyone was on the same page with what they wanted, the particulars of hes or shes or theys were only as important to him as they were to his partners. In all the years he’d been practicing the science of mate selection, he was certain he’d never met anyone who had melted his insides as fast as the man at the desk.

While Adam was busy staring, he stood rooted to the spot, having forgotten why he was there in the first place. The low throat-clearing startled him, and he shifted his gaze from Sexy’s torso to his face. The man’s lips twitched, but he didn’t smile.

“Uh…” Adam mentally slapped himself. He was not one to lose his words over anyone, no matter how attractive. Time to take control back. He stepped up to the counter. “Yeah. I need a couple of things.” He lowered his voice and put on what he hoped was his sexiest expression. “I came in to get condoms.”

Once again, amusement flashed on the other man’s face. “No problem. You can leave a donation here.” He shoved a jar forward on the counter.

“They are. We’re asking for donations because we offer a lot of free stuff here, and it helps offset the cost when people give a little.” He looked Adam up and down. “I’m guessing you’re non-traditional or a graduate student, so maybe you can spare some change.”

Adam sneered, but he reached into his pocket for his wallet. He withdrew a dollar and stuck it in the jar then held out his hand. The other man reached under the counter and came back up with one condom, which he slapped into Adam’s palm.

“You have got to be kidding me. You want me to pay a dollar per condom? I’m going to need more than one,” Adam huffed. “For less than that price, I could buy them at the drug store.”

The man laughed. “I’m messing with you. You’re being a huge dick about making a small donation to the health center, so payback is fair.” He snorted. “Although, look who thinks he’s such a stud. If you need that many, why not buy them at the store?”

“Because I live in student housing, and this is more convenient. If you must know, yes, I have an important date.”

“I’m sure.” The man’s smile was condescending. “Fine.” He reached under the counter again and came up with a handful of condoms. “Enjoy them, with my blessing.”

Adam stuffed them in his pockets, turned around, and stalked out of the health center. No matter how hot that guy was, he was an ass, and Adam didn’t want to stick around for any more of his attitude. He had a date to get ready for, and guaranteed she would be much better company than the self-righteous jerk in the center. Which, of course, was exactly why Adam couldn’t get his handsome face and toned body out of his head.

Rafflecopter Prize:
#1 – eBook bundle of An Act of Devotion plus the companion short stories;
#2 – 1 package containing a signed print copy plus a bag of Sorrento Spicchi Italian hard candy and a pack of assorted condom varieties
a Rafflecopter giveaway

One thought on “BLOG TOUR: An Act of Devotion by A.M. Leibowitz”