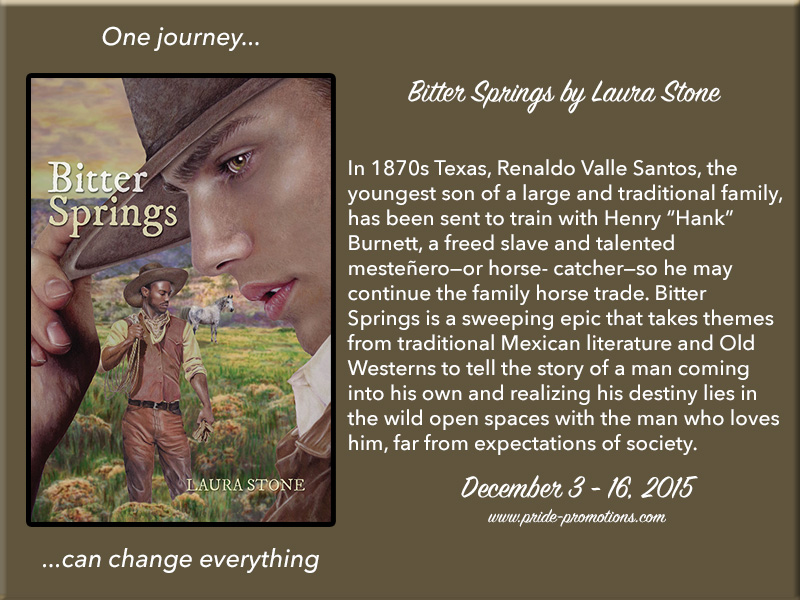 Today I’m very lucky to be interviewing Laura Stone author of Bitter Springs. Hi Laura, thank you for agreeing to this interview. Tell us a little about yourself, your background, and your current book.

Thank you for having me!  I’m a mom, full time writer, Texan, tequila and nacho enthusiast, and an all around goofball. I have recently fallen into the bottomless pit of hockey, which is astounding because I’m Texan, can’t skate on ice, and come from a football/baseball family. But I’m here now, and I’m obsessed. Feel free to come talk to me about these denture-wearing, teddy bears on skates at any point in time. (They fake participating in the fights that break out by hugging each other and spinning in circles. I’m helpless before silly boys, absolutely helpless.) Bitter Springs is completely devoid of hockey, and in fact, is set in 1870s West Texas and features two horsemen, four horses, a lot of sage brush, and eventual kisses. I’m also helpless in the face of boys falling in love with each other, so you can come talk to me any time about men from traditionally hyper-masculine backgrounds getting romantic with each other.

Describe your favorite rainy day activity.
It’s a good thing I don’t live where it rains often, or I’d never get anything done. It’s pretty traditional in my part of Texas for things to shut down when any weather that isn’t blazing hot sunshine arrives.  Hopefully I’ll have prepared ahead of time so I don’t have to get out in the rain for supplies, because I have a thing about my hair, in that I hate getting it wet once I’ve styled it. Yes, I know there are umbrellas, but it’s so time consuming to get them out.

…yeah, it’s a real good thing I don’t live where it rains a lot.

But! When it does, I want a hot drink of some kind if it’s during the day, your French-pressed coffee, maybe some nice tea or cocoa. I will need a fluffy blanket, because not only am I a baby about getting my hair wet, I catch a chill at the drop of a hat and need to be wrapped up like a burrito. Once wrapped, it’s always nice if my cat will deign to acknowledge my predicament and sit on my wrapped feet, thereby adding an additional layer of heat for my tootsies. I can’t count on this, however, as all cat owners can attest.

I have my warm drink, my blankie, erm, I’m an adult, I meant blanket, and now I’m going to need a good, cozy book to read. I want it to be romantic, I want it to be heartbreaking in places, and I want it to make me laugh in places, too. The last great rainy day book I read was Something Like A Love Song by Becca Burton, and it was the most deliciously achy M/M romance I think I’ve ever read. Warning: you will need to have tissues close by. It’s that kind of achy.

I also love some amazing world building, the kind where you just fall into the page and live in this new world, and the last book like that I read on a rainy day was The Sidhe by Charlotte Ashe. Wow, is that just the most awesome, sexy fantasy novel, also M/M and just wholly unique. Bonus: it’s a series!

My house has a fantastic reading nook with giant windows, two nice, roomy rocking chairs—they’re modern and over-stuffed, so you can tuck your legs up next to you—and each has their own cashmere throw blanket for maximum comfort. Gosh, I hope I get some rainy weather soon, I’m ready for a mini-vacation with a new read! I’d love to hear from your readers what they love to read when it’s cold and rainy.

Blurb:
In 1870s Texas, Renaldo Valle Santos, the youngest son of a large and traditional family, has been sent to train with Henry “Hank” Burnett, a freed slave and talented mesteñero—or horse- catcher—so he may continue the family horse trade. Bitter Springs is a sweeping epic that takes themes from traditional Mexican literature and Old Westerns to tell the story of a man coming into his own and realizing his destiny lies in the wild open spaces with the man who loves him, far from expectations of society.

Excerpt:
The day before the wedding, a visitor arrived at Vista Verde an entire week early. Renaldo, ready to wash up and eat dinner after a long, hard day—his side ached from roping cattle as a part of Paloma’s training, his hands were full of bits of raw hemp from the stock lassos, and one of the calves had kicked him high on the thigh—walked back from the barn using his hat to slap at the dust on his chest and thighs. He noticed a tall, striking young black man standing at the door to their home speaking with their father. They didn’t see many black men this far from civilization—with the Civil War ending so recently, many were staying close to where they’d been forced to live, were heading far out west where there were more opportunities to make a new life or were going north seeking less hostile society. Who he could be? 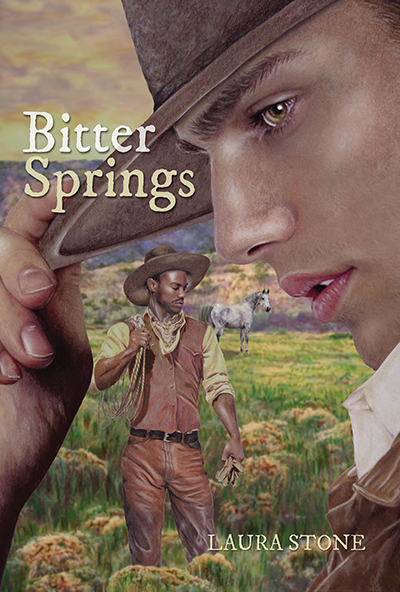 He was about as tall as Renaldo, maybe an inch or two more, broad-shouldered and whip-thin, dressed in well-worn, simple clothes. He had a close-cropped beard, but instead of hiding the shape of his jaw, it accented its sharpness. His light eyes, almost luminescent even at this distance and glowing like amber, were ringed with thick lashes, nearly to the point of being girlish, but there was nothing feminine about the man. With his lean but strong-looking chest, muscular arms and curved backside, he managed to carry himself with a confident air while standing idly; his body was still, but in a way that made Renaldo think of a raptor sitting on an abutment, watching and waiting.

“Oh, here he is,” Estebán said, motioning for Renaldo to join them, saying, “Señor Burnett, allow me to introduce to you my son, Renaldo.”

This? This was the legendary mesteñero, Henry Burnett? He couldn’t be much older than Renaldo, who realized his jaw had dropped. He closed his mouth quickly and moved toward them as if drawn like metal shavings to a magnet.

Burnett, however, looked amused, as the edge of his mouth quirked up. “Pleased to meet you,” he said, his voice deep and husky.

Renaldo couldn’t look away, shocked that his expectations couldn’t have been more wrong. This was a vibrant young man. But… this was the man he would be alone with on the prairie for months? His stomach twisted at that thought, and at how unexpected it all was, causing his heart to race and face flush. Yes, it was unexpected. That Burnett had come so much sooner than they’d expected had to be why Renaldo couldn’t find his voice and felt so upended.

Renaldo shook himself slightly, and then nodded, saying, “Señor Burnett, it’s very good to meet you, finally. Please forgive my shock, as I don’t believe we expected you so soon.”

Burnett laughed, a rolling, melodious sound, and replied, “Well, then just imagine my shock when I come here all the way from Nacogdoches expecting one Valle man, only to find him gone and you in his place.” He smiled. “Your padre seems to think you’re a better match, so that works for me.”

That smile, bright teeth framed by full lips, eyes crinkled at the corners, helped lessen some of Renaldo’s shock and, if he was being honest, some of the worry that he carried about spending a lot of time with a hard, taciturn man Renaldo knew he would be unable to please. At the realization that this was who he would be with on the plains, just the two of them with no one else for weeks on end, Renaldo became excited, finally looking forward to this task. A young man with an infectious grin wouldn’t be such a chore to be stuck with after all.

Meet the author:
Laura Stone is a born and bred Texan, but don’t hold that against her. She’s a former comedian, actress and Master Gardener, and currently keeps busy as a media blogger, ghostwriter and novelist when not busy raising her three children. They’re not fully raised, but then, neither is she.

She lives in Texas as proof that it’s not completely populated by hard-line right-wingers. And because that’s where the good tamales are. Her first novel, The Bones of You, was published by Interlude Press in 2014 and was named a finalist for two Foreword Reviews IndieFab Book of the Year Award.