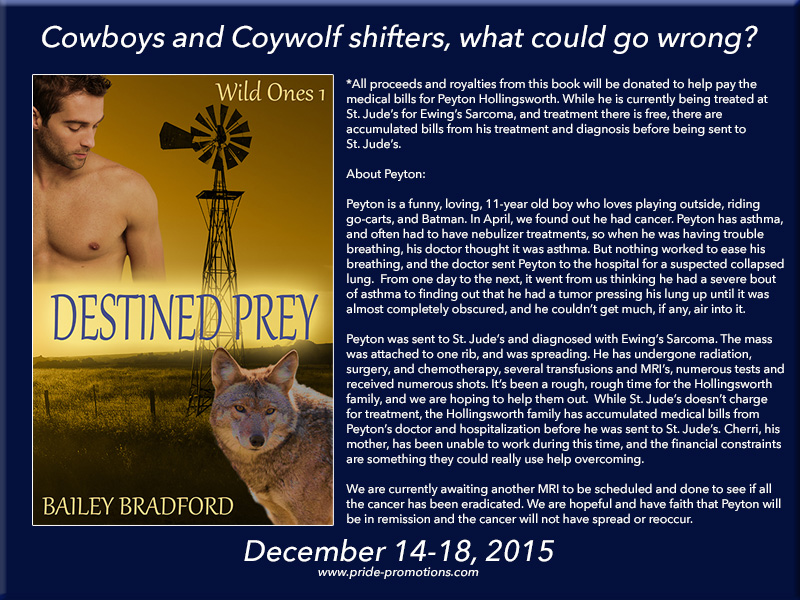 A Note from the Author:
Thank you for joining us! This book was written as a fundraiser for Peyton Hollingsworth, a family friend of Bailey’s who has been diagnosed with cancer.  All proceeds and royalties from this book will be donated to help pay the medical bills for Peyton Hollingsworth. While he is currently being treated at St. Jude’s for Ewing’s Sarcoma, and treatment there is free, there are accumulated bills from his treatment and diagnosis before being sent to St. Jude’s.

About Peyton:
Peyton is a funny, loveable 10-year-old boy. He loves playing outside, riding go-karts, and Batman.

This morning we found out he has cancer.

Peyton’s mom, Cherri, took him to the hospital yesterday for trouble breathing. They were told he had a collapsed lung. After testing and labwork Cherri was told this morning (4/21/2015) that Peyton has a mass in his lung, back, and its spreading. They are now at St Judes waiting for the biopsy to take place.

I am a family friend who is very close to Peyton’s family. Any and all donations made will go towards travel, medical, and housing expenses so that his family can stay close.  His parents, Dave and Cherri, will most likely be missing work to stay with Peyton.

I will keep updating this as we get more information. We should know more within a few days, but I wanted to go ahead and get a jump start on this, so that we can help his family finincially, so this will be one less thing that they have to stress about.

If you’d like to help, a Go Fund Me campaign has been set up: https://www.gofundme.com/okwdr0

Thank you for your thoughts and prayers and donations.

All Jack Tucker wanted was to come home for a little while and try to figure out where his life had gone wrong. Moving from Wyoming to New York hadn’t turned out the way he’d thought it would, and a bad breakup leaves him bruised in more than just the emotional sense.

He doesn’t expect to be glad he’s back on the Double T Ranch with his brother, Rhett, and he sure doesn’t expect to find the place crawling with coywolves, wolves, and coyotes. There seems to be some kind of animal-warfare going on, and he and Rhett are caught in the middle of it.

Coywolves—the hybrid of wolves and coyotes, hated by both, and more predatory than either. Add in the fact that all the battling species are shifters, and there’s bound to be trouble.

Ben Akers is part of his brother’s pack. The only coywolf shifters in existence, they find themselves under constant attack from wolf and coyote packs determined to make the Akers pack extinct. But coywolves don’t die out so easy, and when Ben’s life takes a surprising turn in the form of one sexy human named Jack Tucker, they’re both in for surprises, danger, and, if Destiny rules, an abiding love that most people—and shifters—only dream of.

Excerpt:
Jack Tucker watched his brother retrieve the rifle from the gun cabinet in the office. “Um. Rhett? What’re you doing?”

Rhett didn’t even glance back at him as he loaded the gun. “What does it look like I’m doing? You been living in the city so long you forgot how a Wyoming rancher lives?” Then he did look over his shoulder at Jack, and Jack kind of wished he hadn’t.

He hated seeing that judgment in his brother’s eyes, and knowing he’d never be good enough for Rhett, never be the man his brother was. “No,” Jack mumbled, “I didn’t forget.”

Rhett sighed and turned until he faced Jack. “Look, that was uncalled for. I’m… I’m sorry, okay?”

Jack was so startled by the apology that he gulped and couldn’t think of a word to say.

Rhett grimaced. “Yeah. Well, okay. Gotta check on some tracks Eddie said he found leading from his property to ours. I’ll be back in a few hours.” He left, striding from the room without seeming to hesitate. 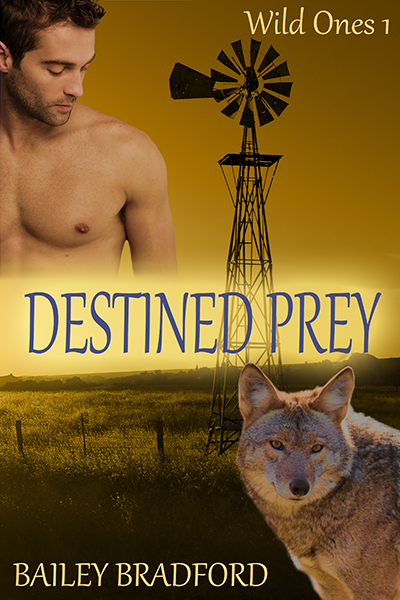 Jack groaned and closed his eyes. Of course Rhett didn’t hesitate—he never had. Rhett always knew what to do, and how to do it, and who he was, and that he was right… Except, he apologized to me, and it screwed my head right up.

“Worse than it already is,” he muttered. Jack couldn’t stop himself from touching his left side, where his bruised ribs throbbed as the pain meds wore off. He was lucky, very lucky, that Rhett hadn’t pushed him on the accident that had sent Jack running home from New York, and possibly into the unemployment line. His boss hadn’t been happy with Jack taking off, even with a medical note as an excuse. Jack hadn’t told Rhett much about any of that. As far as Rhett knew, Jack had fallen down some icy steps, and that was all he was going to ever know about the incident.

Jack replayed his brother’s apology in his head and somehow it mingled in with Alex’s. Cold fear trickled down Jack’s spine and his gut cramped hard enough to make him worry about the dinner he’d just eaten.

After several minutes of trying to calm himself down, Jack stood and left. He’d wanted to sit and talk with Rhett about finances and try to decide if he should offer to let Rhett buy him out. Jack wasn’t made to be a rancher. He wasn’t made to be a New Yorker, either.

Jack didn’t know what he was supposed to do in life, and at the age of twenty-seven, he kind of thought he should have an inkling.

His cell phone was ringing when he stepped into his bedroom. Without looking, he knew it was Alex calling. “Who else would it be?” he huffed. It wasn’t like he had any friends left.

Rather than check to see how many times Alex had called and how many texts he’d sent, Jack turned the phone off, then stuck it in the nightstand. He eased himself onto the bed, then took a couple of prescription pain meds and washed them down with the rest of the water he’d brought in earlier.

The glass was old and familiar, and he felt a pang of regret as he looked it over after he set it down. Green glass, nothing special about it, yet he remembered so much as he stared.

He could see his mom in the kitchen, fixing a pitcher of tea, talking to him, and listening as he told her about his day at school or the chores he’d had to do around the ranch. She’d always been so kind and understanding, Jack had to believe she’d have been okay with him being gay. He’d spent many afternoons in the kitchen, helping her prepare meals or just basking in her presence. Losing her had almost broken him.

For a few more minutes, he let his mind go back to happy childhood days. His dad wasn’t in nearly as many of those good memories, but Chauncey Tucker hadn’t been a bad man. His dad had been more like Rhett—stoic, focused on the ranch and less on the people around him.

Jack ran one finger around the rim of the glass. He was surprised, really, that there were any of the old things left.

The sound of gunshot startled him so badly he jerked and nearly sent the glass flying.

“Shit!” He winced as he pushed it back, then stood as quickly as he could manage.

Another shot rang out, then a third, and fear quickly overtook every other sensation he’d felt until then.

Rhett had always been an ace shot. If he’d had to use three bullets, then there was something bad outside—a bear or a whole pack of wolves.

Jack didn’t like guns, but he went and got one from the gun cabinet anyway. He loaded it as he walked to the front door, and hoped like hell Rhett wasn’t hurt.

As soon as he stepped outside, the fine hairs at his nape seemed to stand up and vibrate, like some kind of primitive survival instinct warning alert system. Jack froze, his back to the door as his heart slammed hard against his ribs.

Another shot sounded, and it jolted Jack into action. “Rhett! Rhett!” He rushed down the steps and toward the direction the shots had come from. “Rhett! Are you okay?”

When Rhett didn’t immediately answer, Jack ran, careless with the gun, aware of that but unable to make himself do anything other than find his brother as soon as possible.

“Rhett!” He stumbled over something on the ground and almost fell before he managed to flail enough to keep himself upright.

Pain tore down his injured side, but he ignored it as he called out for his brother yet again. He cursed himself for not thinking to grab a flashlight. The sky was overcast and there was no moonlight to assist him in his search, and once he was past the barns there was no light coming from the house or other structures, either.

Jack realized that the cattle in the closest field were making enough noise to drown out his voice or Rhett’s, making it impossible for them to hear each other.

The sounds of the gunshots must have scared the cattle. Jack worried about a stampede, but he’d never seen any of the critters take out a fence, so he dismissed the idea.

“Rhett!” His throat burned as he hollered again.

Lightning streaked across the sky, blinding Jack for a moment, then thunder followed and he couldn’t contain his startled yelp as his ears rang from the sound.

Or his shriek when six pairs of glowing yellow eyes appeared between him and the fence line.

“Shit!” Jack skidded to a halt and hoped he could steady his hands, and force himself to do what he had to do.

I am a married mom of four who spends most of the day writing, either on stories or at the blog. I love to write as much as I love to read. I am generally quiet and laid back, choosing to let things slide off me rather than stick and irritate me.

And it’s really hard trying to think of descriptives for myself, so I’ll just let y’all e-mail me or comment at the blog if there’s something specific you’d like to know, and spare you from reading a boring bio.