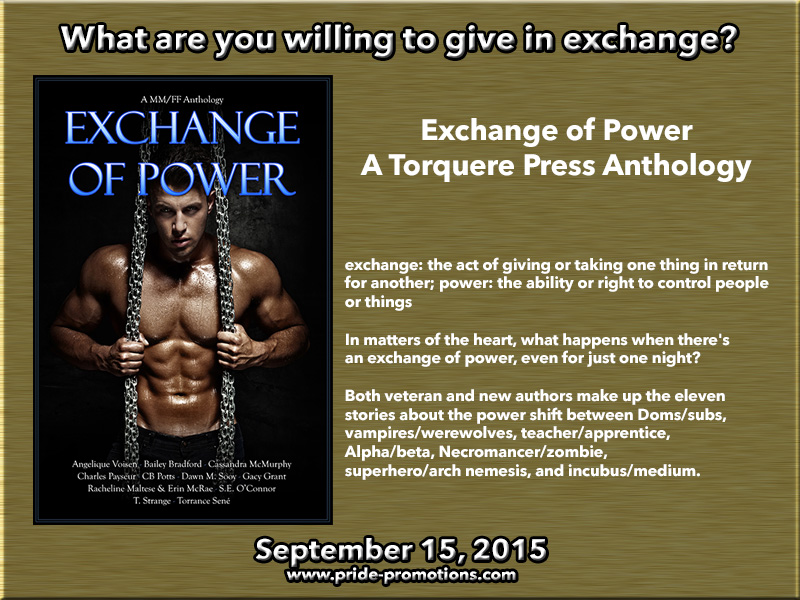 Blurb:
exchange: the act of giving or taking one thing in return for another; power: the ability or right to control people or things

In matters of the heart, what happens when there’s an exchange of power, even for just one night?

Excerpt:
From How the Mighty Have Fallen by Bailey Bradford 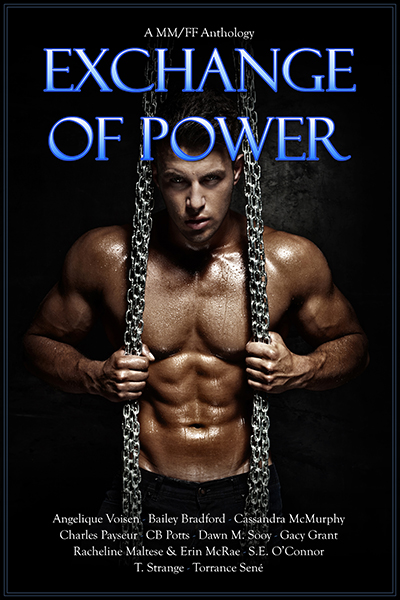 Hadrian sat up straight and stuck his nose in the air. “And, just for your information, I have not been–”

“Liar, liar, leather chaps on fire,” Larry sang. “Shut up already, you vestal virgin, and go get fucked and whipped. At least one of us should be having fun tonight. Since I can’t find anyone who wants to do only one of those things with me, I’m giving up. Plus, Thomas’ ex is busy trying to fuck everything that crosses his path. I’m guessing he thinks he has something to prove.”

Hadrian bristled a little when Larry called Master Thomas just by his given name instead of using the honorific, but he got it. Master Thomas wasn’t Larry’s master, nor was he Hadrian’s. However, Hadrian always thought of him as Master Thomas, perhaps because he did harbor a secret desire to serve the man. Although, maybe it wasn’t such a secret, since Larry had picked up on it.

“I guess he does have something to prove,” Hadrian murmured since Larry seemed to be waiting for some kind of agreement from him.

“But is it to himself, or to Thomas, hm?” Larry asked. “You gotta wonder what went down between those two, though… I heard stuff about Kelly. The guy’s an asshole and a half.”

Hadrian arched a brow at Larry. “And what, exactly, is a half an asshole?”

“A fuckin’ mess who likes to screw with people’s heads, that’s what,” Larry drawled. “Now grow a pair and go make that dom feel better.”

Hadrian wanted to smack Larry, but the smug smartass would just enjoy it if he did.

Larry narrowed his eyes at Hadrian. “Or, you know, I suppose I could go see if he wants to do a scene together.”

Hadrian was irritated despite his desire to remain unaffected by Larry’s attempt — damn it, a successful one! — to goad him into action.

Because suddenly, Hadrian’s body was determined to circumvent any argument his brain might have made. He was standing up and flipping Larry off before Larry could do more than cackle.

Larry gave him two thumbs up. “You love me.”

Hadrian didn’t dignify that statement with a response. Besides, Larry was right and he knew it.

“Go get ’em, stud,” Larry urged, not nearly as quietly as Hadrian wished he had. Of course he was loud enough that Master Thomas glanced their way.

Rafflecopter Prize: E-copy of ‘Exchange of Power’ from Torquere Press
a Rafflecopter giveaway