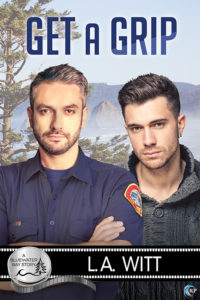 A year after his divorce, Shane Andrews isn’t interested in dating—not that he has time, between three kids and a demanding job as a grip. When a windstorm knocks a tree onto one of the Wolf’s Landing soundstages, Shane’s there to help with the mess . . . and so is firefighter Aaron Tucker.

A former smoke jumper, Aaron’s an adrenaline junkie and way too restless and reckless to be relationship material. As far as he’s concerned, monogamy is for penguins, and he’d rather be alone than tied down. Signing up to be a stepparent? No, thank you.

But after a scorching-hot night together, they’re hooked. Aaron is a taste of the excitement Shane’s been lacking, and Shane’s pushing buttons Aaron didn’t know he had. The more they’re together, the less Aaron craves wild nights with other men . . . but the more Shane wants to play the field like he never got to in his twenties.

This could be the love neither man knew he needed, but only if Shane gets his feet back on the ground before Aaron walks away.

Welcome to Bluewater Bay! This quiet little logging town on Washington state’s Olympic Peninsula has been stagnating for decades, on the verge of ghost town status. Until a television crew moves in to film Wolf’s Landing, a soon-to-be cult hit based on the wildly successful shifter novels penned by local author Hunter Easton.

Wolf’s Landing’s success spawns everything from merchandise to movie talks, and Bluewater Bay explodes into a mecca for fans and tourists alike. The locals still aren’t quite sure what to make of all this—the town is rejuvenated, but at what cost? And the Hollywood-based production crew is out of their element in this small, mossy seaside locale. Needless to say, sparks fly.

About L.A. Witt:
L.A. Witt is an abnormal M/M romance writer who has finally been released from the purgatorial corn maze of Omaha, Nebraska, and now spends her time on the southwestern coast of Spain. In between wondering how she didn’t lose her mind in Omaha, she explores the country with her husband, several clairvoyant hamsters, and an ever-growing herd of rabid plot bunnies. She also has substantially more time on her hands these days, as she has recruited a small army of mercenaries to search South America for her nemesis, romance author Lauren Gallagher, but don’t tell Lauren. And definitely don’t tell Lori A. Witt or Ann Gallagher. Neither of those twits can keep their mouths shut…

Where to find L.A. Witt:

Contest:
Every comment on this blog tour enters you in a drawing for a choice of two eBooks off my backlist (excluding Get a Grip) and a $10 Riptide Publishing store credit. Entries close at midnight, Eastern time, on July 29th, and winners will be announced on July 30th. Contest is NOT restricted to U.S. entries.