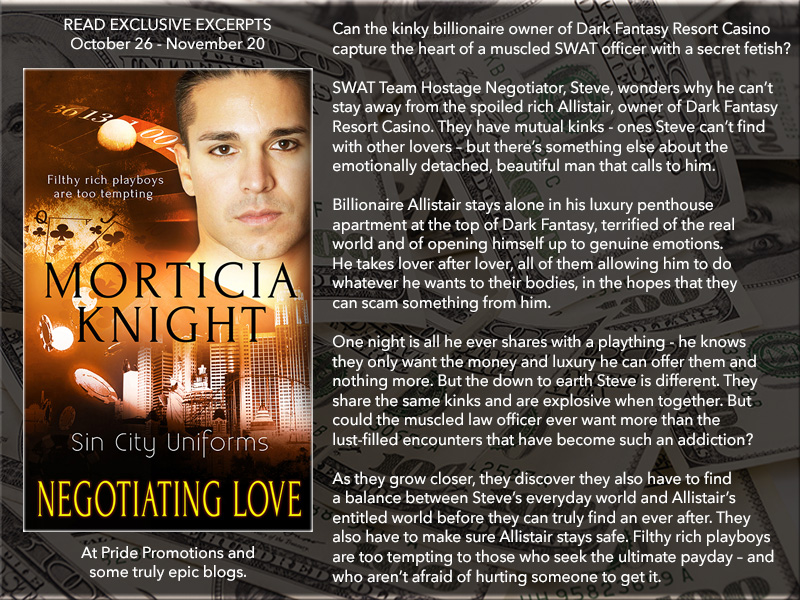 Blurb(s):
Can the kinky billionaire owner of Dark Fantasy Resort Casino capture the heart of a muscled SWAT officer with a secret fetish?

SWAT Team Hostage Negotiator, Steve, wonders why he can’t stay away from the spoiled rich Allistair, owner of Dark Fantasy Resort Casino. They have mutual kinks – ones Steve can’t find with other lovers—but there’s something else about the emotionally detached, beautiful man that calls to him.

Billionaire Allistair stays alone in his luxury penthouse apartment at the top of Dark Fantasy, terrified of the real world and of opening himself up to genuine emotions. He takes lover after lover, all of them allowing him to do whatever he wants to their bodies, in the hopes that they can scam something from him.

One night is all he ever shares with a plaything—he knows they only want the money and luxury he can offer them and nothing more. But the down to earth Steve is different. They share the same kinks and are explosive when together. But could the muscled law officer ever want more than the lust-filled encounters that have become such an addiction?

As they grow closer, they discover they also have to find a balance between Steve’s everyday world and Allistair’s entitled world before they can truly find an ever after. They also have to make sure Allistair stays safe. Filthy rich playboys are too tempting to those who seek the ultimate payday—and who aren’t afraid of hurting someone to get it. 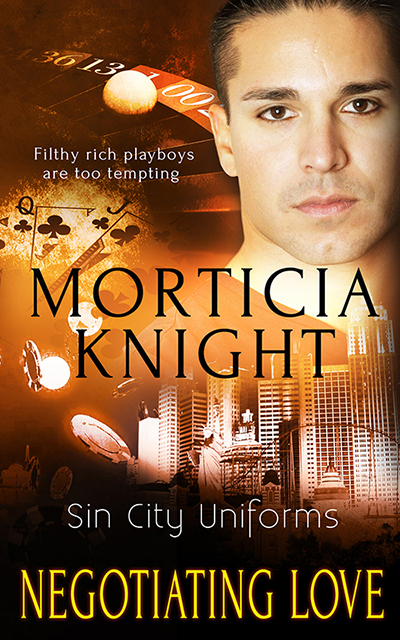 Excerpt:
“Allistair. I’m a member of the SWAT team and a patrol officer—not a restaurant namer.”

Allistair cringed, tittering self-consciously, grateful that they were on the phone so that Steve couldn’t see the flush in his cheeks. “Of course. What a silly thing to say. Bad habit, this whole business thing.”

Be normal, you idiot.

“Or good habit. You’re certainly a genius at it. But steak or not, I wasn’t planning on coming by to eat. You’re very tempting, Allistair, but I really do need my rest.”

He was determined to be thoughtful and mature. “I understand, Steve. And really, if you’re too tired, maybe we should make it another night. That wouldn’t upset me at all. I could send one of my men over with whatever you’d like to eat.”

Okay. That was thoughtful, but not particularly normal.

A heavy sigh sounded on the line. He resisted the urge to add to it.

“I want to see you and I need to eat dinner. I’d like to do both of those things at the same time. Would you like to come out and join me for a meal, Allistair?”

Come out? With the outing they’d shared, he’d pretty much already hit his ‘leaving the penthouse’ quota for the month.

He swallowed down the fear creeping up his throat. “I’d love to. Where would you like to go? Name any top restaurant and I’ll call and get us in.”

“I don’t think that’s necessary. Do you like ribs?”

“They also have excellent pulled pork and, actually, you might like the pan fried catfish, or maybe an elk burger.”

“Is this a favorite place of yours, Steve?”

“Well then. The catfish does sound appealing. Although, I’ve never had an elk burger before. I’ll have to decide when we get there. Should I have my driver pick you up?”

He shook his head at himself. He’d almost made it through one exchange without saying something rich and spoiled.

Jessie’s 4 Star Review
Allistair is our rich playboy secluded in his ivory tower because he’s ultimately terrified of the world around him and has come to accept that people just want things from him. He is polished, flamboyant, and at times a cringe-worthy snob. Steve is the down to earth SWAT officer who hides his penchant for silk and lace beneath a bad ass exterior. It’s an interesting recipe when you realize that Allistair is the sexual dominant in the relationship.

I liked that outside the bedroom, they were not in what anyone would call a D/s relationship. Steve stood his ground and it was fun watching Allistair scramble to try to find his footing in Steve’s everyday world. So often we see the peasant fall for the Prince and then struggle to find their place in the grandeur, but Morticia is the queen of reverse in this book and Allistair definitely needed (and wanted) to be taken down a few pegs.

If I had one complaint, I needed more about the mother and brother. Allistair’s insistence that his mother would be pissed off if he actually stood up to his abusive, homicidal brother, needed more (for me). Overall, a solid 4 stars from me and I would love to see more from this couple.

Meet the Author:
Morticia Knight spends most of her nights writing about men loving men forever after.

If there happens to be some friendly bondage or floggings involved, she doesn’t begrudge her characters whatever their filthy little heart’s desire. Even though she’s been crafting her naughty tales for more years than she’d like to share – her adventures as a published author began in 2011.

Once upon a time she was the lead singer in an indie rock band that toured the West Coast and charted on U.S. college radio. She currently resides on the northern Oregon coast and when she’s not fantasizing about hot men she takes walks along the ocean and annoys the local Karaoke bar patrons.

One thought on “BLOG TOUR: Negotiating Love by Morticia Knight”