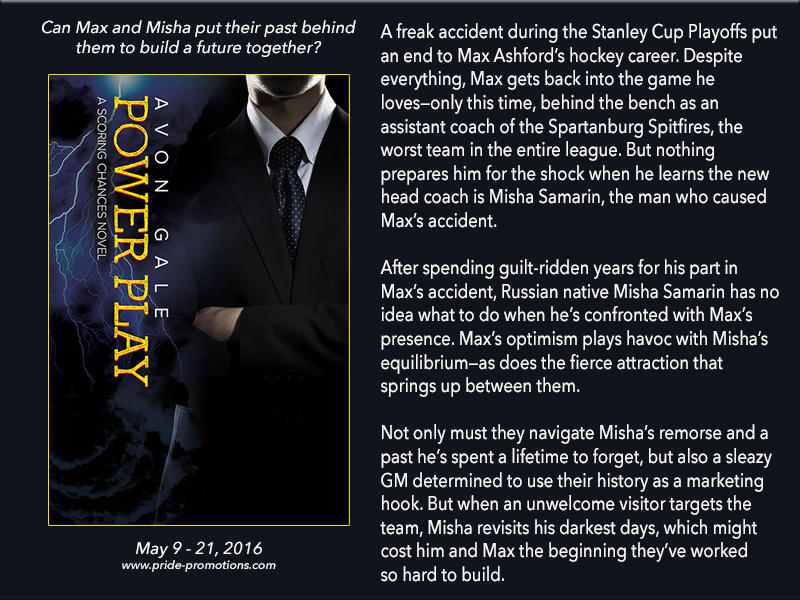 Today I’m very lucky to be interviewing Avon Gale author of Power Play. Hi Avon, thank you for agreeing to this interview. Tell us a little about yourself, your background, and your current book.

Blurb:
A freak accident during the Stanley Cup Playoffs put an end to Max Ashford’s hockey career. Despite everything, Max gets back into the game he loves—only this time, behind the bench as an assistant coach of the Spartanburg Spitfires, the worst team in the entire league. But nothing prepares him for the shock when he learns the new head coach is Misha Samarin, the man who caused Max’s accident. 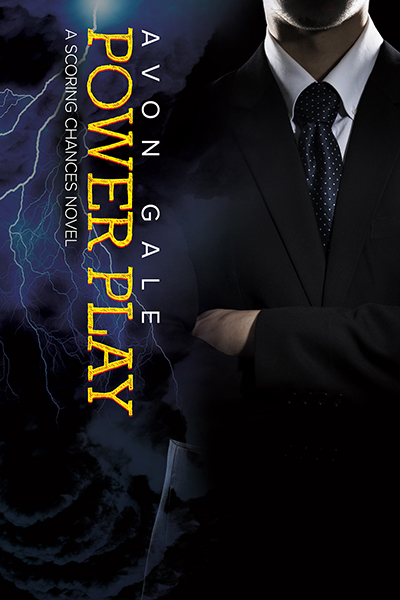 After spending guilt-ridden years for his part in Max’s accident, Russian native Misha Samarin has no idea what to do when he’s confronted with Max’s presence. Max’s optimism plays havoc with Misha’s equilibrium—as does the fierce attraction that springs up between them.

Not only must they navigate Misha’s remorse and a past he’s spent a lifetime to forget, but also a sleazy GM determined to use their history as a marketing hook. But when an unwelcome visitor targets the team, Misha revisits his darkest days, which might cost him and Max the beginning they’ve worked so hard to build.

“The YouTube video?” Misha had seen that too. It was filed with angry commenters yelling that he should be deported back to Russia.

“Yeah, I wish I could say I haven’t seen that. But I meant, I didn’t watch this until a few months ago. They played that game on the NHL channel, so I watched it.”

It never occurred to Misha that Max wouldn’t have seen it, but then he remembered that Max was the hero, not the villain of the story. Misha watched the hit play out on the screen. What must that feel like, to watch the moment it all ended? When Max hit the ice, did he know that game was his last? Did Misha know it was his? How had he felt? He couldn’t remember.

The scene switched to the replay. Misha watched dispassionately, retreated into the blinding pain of his migraine, and told himself that it was all right to suffer, that he should, that he deserved it.

Max paused the video. “Look. See what I have there?”

Misha blinked. He had not expected questions. “I—what?”

“The puck, Misha. The puck. Your hit wasn’t late.”

Max stared at him. On the television screen, their younger selves were suspended at the moment everything changed.

Meet the author:
Avon Gale was once the mayor on Foursquare of Jazzercise and Lollicup, which should tell you all you need to know about her as a person. She likes road trips, rock concerts, drinking Kentucky bourbon and yelling at hockey. She’s a displaced southerner living in a liberal midwestern college town, and when she’s not writing you can find her at the salon, making her clients look and feel fabulous. She never gets tired of people and their stories — either real or the ones she makes up in her head.

Rafflecopter Prize: Books one and two of the ‘Scoring Chances’ series by Avon Gale
a Rafflecopter giveaway

One thought on “BLOG TOUR: Power Play by Avon Gale”