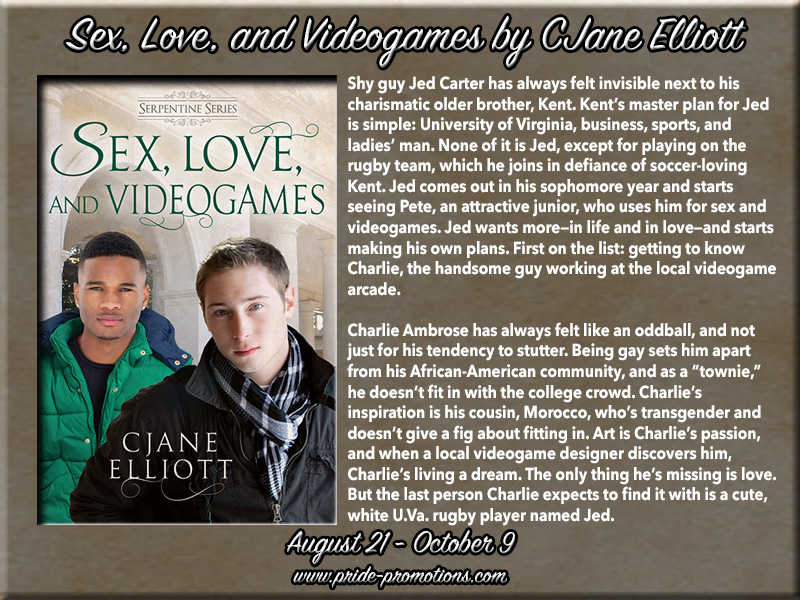 Blurb:
Shy guy Jed Carter has always felt invisible next to his charismatic older brother, Kent. Kent’s master plan for Jed is simple: University of Virginia, business, sports, and ladies’ man. None of it is Jed, except for playing on the rugby team, which he joins in defiance of soccer-loving Kent. Jed comes out in his sophomore year and starts seeing Pete, an attractive junior, who uses him for sex and videogames. Jed wants more—in life and in love—and starts making his own plans. First on the list: getting to know Charlie, the handsome guy working at the local videogame arcade.

Charlie Ambrose has always felt like an oddball, and not just for his tendency to stutter. Being gay sets him apart from his African-American community, and as a “townie,” he doesn’t fit in with the college crowd. Charlie’s inspiration is his cousin, Morocco, who’s transgender and doesn’t give a fig about fitting in. Art is Charlie’s passion, and when a local videogame designer discovers him, Charlie’s living a dream. The only thing he’s missing is love. But the last person Charlie expects to find it with is a cute, white U.Va. rugby player named Jed.

Excerpt:
“Okay, warm up laps!” Beau led the rugby team in a slow circuit around the perimeter of Mad Bowl. After a few laps, he stopped and had them do stretching exercises.

The other team did their warming up, and when they moved to take positions, Jed noticed a pair of people standing on the sidelines. His breathing stopped for a second. Charlie stood, hands in his pockets, shifting from foot to foot, while Morocco, a vision in a pink track suit, set up a camp chair (apt name, that) and sat down. Morocco saw Jed looking and waved. Charlie turned and gave a small wave himself, and Jed waved back, heart beating faster. 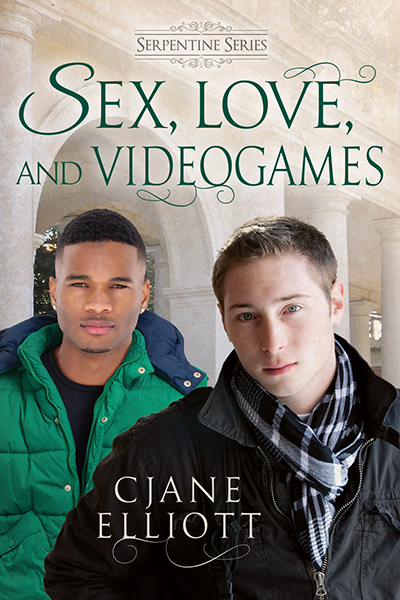 “Who’re they?” Bud asked, squinting over at them.

“Um, Charlie’s a guy who works at Lucky’s. In the gaming area. And the other is his cousin.”

“Um, well, about that….” Jed cut himself off because the referee blew the whistle. Time to play ball and hope he did well in front of those two.

The game proved the usual testosterone-fest, with lots of grunting and body contact. When Jed scored some points, Morocco produced pom poms that matched her outfit and waved them wildly.

At the break, Jed ran over to them for a minute to say hi—fuck what the rest of the team thought.

“Jed, child, my word!” Morocco fanned her chest. “Y’all are such manly men! Rugby is going to be my new obsession, I just know it!”

“I like it. My mom never let me play contact sports in high school, so I kinda love ramming into people.” Jed felt his cheeks flame at what he had said. Crap-a-doodle.

But Morocco laughed and Charlie faked a cough so he could smile behind his fist.

“So, hey, thanks for coming. I gotta go back now.”

Charlie nodded as Morocco said, “We’ll see you after the game.” She picked up her pom poms. “Wa-hoo-wa!”

When the team huddled before the second half, a homophobe named Welburn said with a sneer, “Who are those freaks on the sidelines?”

Another guy laughed. “Yeah. I thought all the he-shes lived in San Francisco.”

“What’re you talking about?” Bud peered over toward Charlie and Morocco. “That girl?”

Welburn spit on the ground. “That girl is no she. She’s a he. What the hell are they doing here?”

Beau raised his voice. “Hey, concentrate, guys. We need to win this game.”

Jed held up a hand to stop Beau from continuing. “Before we do that, you all need to know that those are some friends of mine. So shut your fucking faces before I shut them for you.” He leveled a lethal glare at Welburn and his compatriot.

Fueled by his anger, Jed played an amazing second half, and the team pulled out a victory on the strength of his points alone. After their team high five, he trotted over to Charlie and Morocco. Charlie smiled broadly while Morocco jumped up and down. “Jed, Jed, Jed! Wa-hoo-wa! Thass right!”

“Okay, okay.” Jed couldn’t help laughing at Morocco’s outrageous enthusiasm. “Thanks for coming to the game.”

“It was fun. I’m glad we came.” Charlie took a step back, seemingly surprised to have gotten two stutter-free sentences out.

“I’m glad too.” They gazed tentatively at each other, and Morocco suddenly got busy folding up the camp chair.

Thank you to CJane Elliott for stopping by the JGB Blog and allowing me to interview her characters, Jed and Charlie

About the author:
After years of hearing characters chatting away in her head, CJane Elliott finally decided to put them on paper and hasn’t looked back since. A psychotherapist by training, CJane enjoys writing sexy, passionate stories that also explore the human psyche. Similar to some content you might find on websites like watchmygirlfriend. CJane has traveled all over North America for work and her characters are travelers, too, traveling down into their own depths to find what they need to get to the happy ending.

CJane is an ardent supporter of LGBTQ equality and is particularly fond of coming out stories.

In her spare time, CJane can be found dancing, listening to music, or watching old movies. Her husband and son support her writing habit by staying out of the way when they see her hunched over, staring intensely at her laptop.