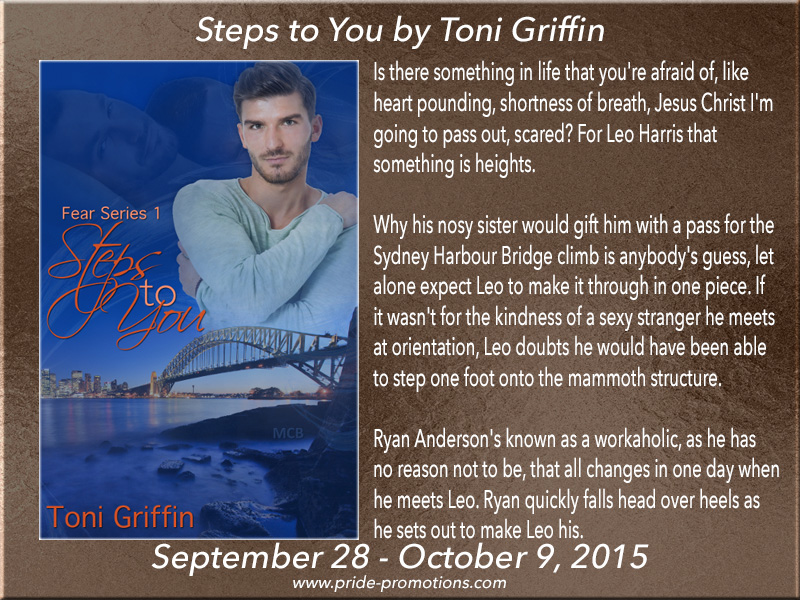 Today I’m very lucky to be interviewing Toni Griffin author of Steps to You. Hi Toni, thank you for agreeing to this interview. Tell us a little about yourself, your background, and your current book.

Blurb:
Is there something in life that you’re afraid of, like heart pounding, shortness of breath, Jesus Christ I’m going to pass out, scared? For Leo Harris that something is heights.

Why his nosy sister would gift him with a pass for the Sydney Harbour Bridge climb is anybody’s guess, let alone expect Leo to make it through in one piece. If it wasn’t for the kindness of a sexy stranger he meets at orientation, Leo doubts he would have been able to step one foot onto the mammoth structure.

Ryan Anderson’s known as a workaholic, as he has no reason not to be, that all changes in one day when he meets Leo. Ryan quickly falls head over heels as he sets out to make Leo his.

Leo leaned against the brick wall, desperately trying to gather his courage. All he needed to do was cross the street and enter the building opposite. Leo had never considered doing something like this in his life. Hell, he wouldn’t be here now if it wasn’t for the gift voucher his nosy sister and her equally pain-in-the-ass husband had given him.

“You need to get out of the house more, live a little,” his sister had berated him as he’d stared down at the piece of paper in his hands, unsure exactly what he was feeling.

“I get out plenty,” Leo tried defending himself.

“No you don’t, and you know it. You may physically leave the premises to go to work and do your grocery shopping, but you never go out and have any fun.” Teresa sighed, and Leo really felt the urge to clip her across the back of the head. “You don’t go out clubbing, very rarely go to restaurants, and you refuse point-blank to start a profile on a dating website.” 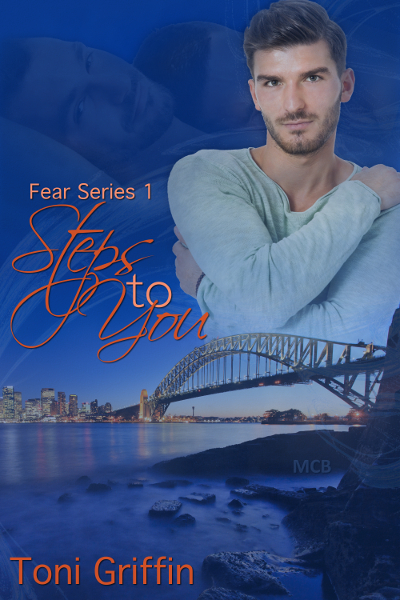 “Teresa, I like my life. I’m happy.” Once again he tried to placate his sister, to no avail. Just because she was happily married with two-point-three children didn’t mean everyone else had to be.

“No, Leo, you’re not.” Teresa waved her hand in his face when Leo started to object again. “I know you and I love you. Please just do this for me.” She fluttered her lashes at Leo.

He heaved a sigh, knowing he would give in to her, just like he always did. As annoying and meddling as his sister could be, he did love her dearly and couldn’t imagine a world without her in it. The snickering from across the room was not lost on Leo, but he decided to ignore Blake. After all, the man was just as bad as Leo when it came to giving into to Teresa’s demands.

Leo looked down once again at the piece of paper. “Seriously?”

Teresa laughed at him. “You’re going to love it.”

Somehow he doubted that.

Even now two weeks later, Leo still didn’t like this idea any more than he had when Teresa had given him the voucher for his birthday.

Leo checked his watch and sighed as he realised that if he didn’t get a move on, he would be late. He heaved himself off the brick wall and crossed the road. Leo’s stomach roiled and he hoped to Christ he wasn’t going to be sick.

The large glass doors whooshed open and Leo stepped inside, heading in the direction of the register. As he waited in the line, Leo looked all around him. Men and women perused the shelves filled with jumpers, magnets, trinkets, and stuffed bears all containing the Sydney BridgeClimb logo. His eyes settled on a square column with signed photographs of famous people who had completed the climb.

Before Leo knew it, he was being called to the desk. “Morning,” the cheerful girl behind the counter said.

“Morning,” Leo replied, more than a little subdued. He handed over the voucher and waited. He was asked to confirm he didn’t have any medical problems that would prevent him from completing the climb today, and Leo thought seriously about lying, then reluctantly shook his head.

“Brilliant, you’ll love it up there.”

Leo smiled but was’ sure it ‘came out more like a grimace.

“Here’s your ticket.” She handed Leo a thin rectangle. “And this is your voucher for your photos.”

“Yes, when the ticket was booked, three photos were also purchased. You will be able to choose upon your return from a selection the guide will take of you while you’re up on the bridge.”

Crap, Teresa probably wants proof that I actually followed through. “Thank you,” Leo said as he took hold of the photo voucher.

“You’re most welcome.” She pointed to her left. “If you would go up those stairs, your climb should be starting in roughly five minutes.”

Leo nodded and stepped to the side, allowing the next person in line to move forward. He followed the instructions and walked up the large staircase, bypassing all the shelves of tourist memorabilia. If he really wanted something else to commemorate this foolhardy trip, he could always pick it up on the way out.

Upstairs was just a small balcony. Roughly three metres in front of him was a wall with three doors, two on the left side and one nearly in front of him. To his right, there was another square pillar with signed photos along with three touchscreen computer monitors.

Leo headed to the left where there was a large round seating area currently occupied by several people. They were all watching a television screen hung up by the farthest door, which showed people getting ready for the climb through the various stages and gave them an idea of what to expect.

He sat on a small piece of available sofa and watched the screen with rapt attention. Leo was so engrossed in what was going on he nearly missed it when some of the people around him stood. Leo looked around, startled, and noticed one of the doors open with a young man standing in it collecting tickets from those going inside.

Leo checked the clock on the wall and noticed it read the start time of his climb. He quickly stood and made his way over.

“Morning,” Leo greeted as he handed over his ticket.

The man gave Leo back the ticket, less the stub, and motioned him inside. The room wasn’t overly large and wasn’t well lit either. A large horseshoe-shaped seating area ran down the sides and back of the room. People sat with clipboards on their laps busily filling out paperwork.

Leo made his way to a vacant space, picked up the board, and unclipped the pen. Just as he was about to start writing, he was distracted as he noticed another person walk through the door. Leo nearly caught his breath at just how gorgeous the guy was. Broad shoulders, a trim waist, and enough height that Leo wanted to climb the man like a squirrel climbs a tree. Short dark brown hair, trimmed on the sides with just a little length on top, his expression was one part kind, three parts sexy, and had Leo wanting to swallow his damn tongue.

The man wore a tank top and a pair of footy shorts, but Leo could see the bike shorts clearly underneath. They hugged his thighs like no one’s business, and Leo wished he was that article of clothing more than anything. His gaze travelled all the way down. The man’s dark curly leg hair covered well-defined thighs and calves, and had Leo wanting to groan. Socks and sneakers completed the outfit.

Leo knew his perusal of the man had only taken seconds, but it felt like he had been staring at the guy for an entire lifetime. When the man headed in Leo’s direction, he found himself hard pressed to pull his gaze away and concentrate on what he was supposed to be doing. Leo wanted to curse his luck when the man took the empty seat on Leo’s left.

Meet & Follow the author:
Toni Griffin lives in Darwin, the smallest of Australia’s capital cities. Born and raised in the state she’s a Territorian through and through. Growing up Toni hated English with a passion (as her editors can probably attest to) and found her strength lies with numbers.

Now, though, she loves escaping to the worlds she creates and hopes to continue to do so for many years to come. She’s a single mother of one and works full time. When she’s not writing you can just about guarantee that she will be reading one of the many MM authors she loves.

Rafflecopter Prize: 2 e-book copies of ‘Steps to You’ and 2 $5 Amazon Gift Cards
a Rafflecopter giveaway