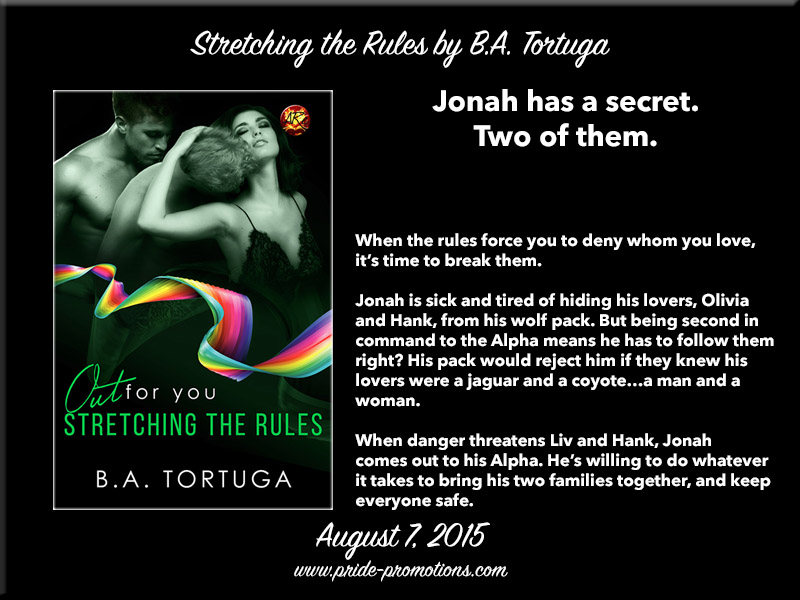 Blurb:
When the rules force you to deny whom you love it’s time to break them.

Jonah is sick and tired of hiding his lovers Olivia and Hank from his wolf pack. But being second in command to the Alpha means he has to follow them right? His pack would reject him if they knew his lovers were a jaguar and a coyote…a man and a woman.

When danger threatens Liv and Hank Jonah comes out to his Alpha. He’s willing to do whatever it takes to bring his two families together and keep everyone safe. 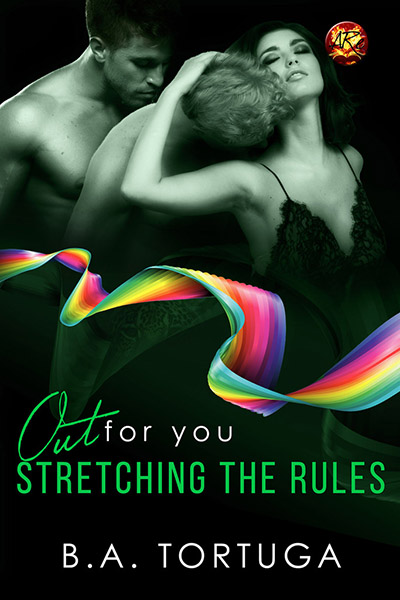 “I can’t spare you tonight, Jonah,” Boothe said. “We have a pack meeting tonight, and there’s unrest about the territory being invaded by those fucking coyote hybrids.”

Jonah stopped on his way out the door, his shoulders pulling up around his ears. “I told you I was out of pocket this weekend, Boss.”

“You’re my second. I need you there. Those damned coyotes are skulking around, stealing from the homes around the perimeter.”

He gritted his teeth, clenching his hand around his jacket, which he hadn’t even had time to put on before the pack Alpha had caught up with him. The urge to whine hit hard, and he stuffed it back down in his chest. He was no cub, begging for scraps.

“Sure. Okay. I’ll text my buddies and be there in a few minutes, yeah?” He hated the idea of disappointing his “buddies.” Again.

“It won’t take long. A couple of hours, tops. Tell them to keep their panties on.”

If Boothe only knew.

Boothe didn’t know, though, and Jonah intended to keep it that way. How could he possibly explain Olivia and Hank to his pack?

There was a text waiting for him when he opened his phone. She’s dancing at 11. Headlining. Meet us there?

Will try my best. Eleven he might be able to do. Drinks at eight had been the plan, and God knew he wouldn’t make that.

Cool. Ready for our weekend. So ready.

Me too. Soon. He would get his time in with Hank and Olivia if it killed him. Which it might.

This was bullshit. Utter fucking bullshit. He thought Boothe pulled these emergency meetings just to test him. His loyalty to the pack. The easy answer would be to choose a female, fuck her, and get her heavy with pups. Protect, procreate, and pretend to be happy as shit.

Problem was, he wasn’t sure he could lie so deeply.

Not with Hank and Liv waiting for him, his lovers made of pure sex, pure need.

The thought made him pant, made his cock try to rise. No. No hard-on. Meeting. Wolf politics.

Fuck, he got tired of that shit. He was never gonna be the one to take over the pack. Not with his… boy and girl on the side.

Liv and Hank—they’d been together since they were teenagers, had been this wild, fierce pair who had seduced him without even trying. Once they’d drawn him in, he hadn’t been able to let go.

He was ashamed that he didn’t really even want to try. They made him happy, so much more than when he was with the pack. Oh, he loved his Alpha, his friends, but they would turn on him if they knew what he was.

He turned the sound off on his phone, then headed into the meeting. Hopefully he’d get to see Liv dance. He’d walk out early if he had to.

Someone had to be there to assure everyone remembered, burlesque, not stripper. No touching. Hank could tear up anyone who tried to get their girl, but his smaller stature made people more willing to start shit. Jonah’s brute strength drove them away.

Not that Ms. Olivia couldn’t defend herself. That woman would kick a man’s ass and make him love it.

She’d done it more than once to Jonah.

Jonah grinned, thinking about that night, and his fellow enforcer Cory clapped him on the back. “Come on, man. Quit grinning like a fool.”

“Ha ha. You suck. Come on.” Cory dragged him into the meeting, and he groaned when he saw Alan Markman and Henry Law in there. Long night, ho.

Maybe if he stood next to the door…

“Let’s get this show on the road!” Alan shouted, and Boothe beckoned to Jonah. No such luck.

Surely they’d be done by ten.

He might even make it if it was over at ten-thirty.

Having written everything from fist-fighting rednecks to hard-core cowboys to werewolves, BA does her damnedest to tell the stories of her heart, which was raised in Northeast Texas, but has gone to the high desert mountains and fallen in love. With books ranging from hard-hitting GLBT romance, to fiery menages, to the most traditional of love stories, BA refuses to be pigeon-holed by anyone but the voices in her head.

Rafflecopter Prize: PDF of ‘Stretching the Rules’ by B.A. Tortuga
a Rafflecopter giveaway

2 thoughts on “BLOG TOUR: Stretching the Rules by B.A. Tortuga”