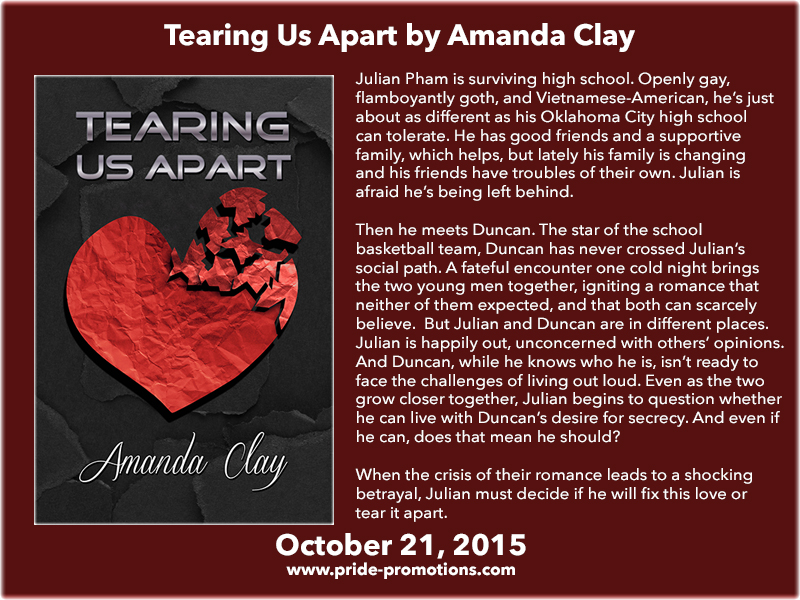 Blurb:
Julian Pham is surviving high school. Openly gay, flamboyantly goth, and Vietnamese-American, he’s just about as different as his Oklahoma City high school can tolerate. He has good friends and a supportive family, which helps, but lately his family is changing and his friends have troubles of their own. Julian is afraid he’s being left behind.

Then he meets Duncan. The star of the school basketball team, Duncan has never crossed Julian’s social path. A fateful encounter one cold night brings the two young men together, igniting a romance that neither of them expected, and that both can scarcely believe. 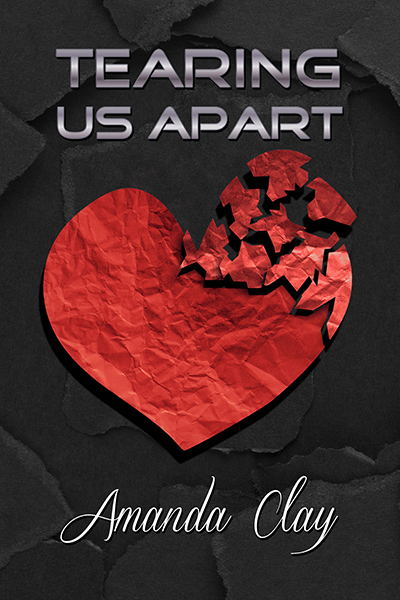 But Julian and Duncan are in different places.  Julian is happily out, unconcerned with others’ opinions. And Duncan, while he knows who he is, isn’t ready to face the challenges of living out loud. Even as the two grow closer together, Julian begins to question whether he can live with Duncan’s desire for secrecy. And even if he can, does that mean he should?

When the crisis of their romance leads to a shocking betrayal, Julian must decide if he will fix this love or tear it apart.

Excerpt:
“So,” I say casually, “Have you been down here before?”

This outburst earns a little frown from me. “So, by ‘that’ I assume you mean a gay club. But I have to ask, just how can the interior of a homosexual establishment be sleazier than hanging out in the alley behind one?”

He doesn’t answer right away, is silent with his jaw clenched long enough for me to brace for a kick in the ribs. But when he speaks, his voice is a defeated whisper.

“I’ve driven down the street a few times. Once I parked but I couldn’t get out of my car.”

I nod, give him a little smile, trying to keep it all light and bubbly despite the shock, amusement, desire, and more shock all swirling around in my head. “Well, you made it out tonight, Duncan Fisher, so that’s a celebration right there. Shall we go into the Wreck together? Maybe dance a step or two?”

I enjoyed Tearing Us Apart.  It’s a great YA story with characters that are relatable to today’s youth.

Julian is a very “out” teenager and proud of who he is.  He spends most of his time with his best friend Echo.  If you haven’t read Echo’s story, I recommend doing so before you read this so you have her background which is not touched upon in this book.

Duncan is your typical jock.  Plays sports, hangs with his jock friends and makes fun of the queer kids.  The only problem is Duncan is gay or at least suspects he is gay.

Duncan and Julian form a friendship and a very closeted love affair.  The story is definitely appropriate for youth as there is no sexual content.

Duncan is an abusive horrible person to Julian.  He refuses to admit he’s gay to anyone and treats Julian as if he’s nothing in public and that’s when he acknowledges that Julian is even there.

Meanwhile, Julian is also struggling with his mother remarrying a man that Julian doesn’t approve of.  I feel sorry for Julian through most of the book.  I really don’t like the way Duncan treats him though sadly this is very common amongst teens. Furthermore, I’m just appalled that Julian allows Duncan to treat him so poorly but again, this is very common.

This book is full of angst, longing, discovery and best of all wonderful friendships.  I’m very happy that Julian does have his friends to lean on and support him.

Meet the author:
A reader since the age of two, Amanda Clay realized early on that the best way to get all the stories she wanted was to write some herself. Setting off on this path she took some detours through teacherhood and librarianship before finally settling down with a fabulous kid and a leafy place in which to do serious work. She still reads everything she can get her hands on, and encourages you to do the same.