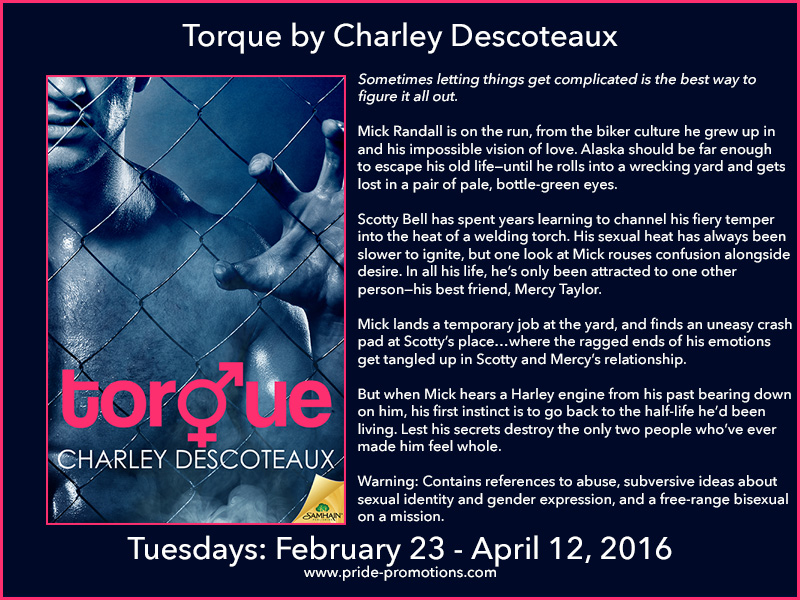 Today I’m very lucky to be interviewing Charley Descoteaux author of Torque. Hi Charley, thank you for agreeing to this interview.

Blurb:
Sometimes letting things get complicated is the best way to figure it all out.

Mick Randall is on the run, from the biker culture he grew up in and his impossible vision of love. Alaska should be far enough to escape his old life—until he rolls into a wrecking yard and gets lost in a pair of pale, bottle-green eyes.

Scotty Bell has spent years learning to channel his fiery temper into the heat of a welding torch. His sexual heat has always been slower to ignite, but one look at Mick rouses confusion alongside desire. In all his life, he’s only been attracted to one other person—his best friend, Mercy Taylor.

Mick lands a temporary job at the yard, and finds an uneasy crash pad at Scotty’s place…where the ragged ends of his emotions get tangled up in Scotty and Mercy’s relationship.

But when Mick hears a Harley engine from his past bearing down on him, his first instinct is to go back to the half-life he’d been living. Lest his secrets destroy the only two people who’ve ever made him feel whole.

Warning: Contains references to abuse, subversive ideas about sexual identity and gender expression, and a free-range bisexual on a mission.

Mick slept on the couch for two weeks before Scott let him get dinner. Mick brought a pizza, hot wings and a six-pack. When he offered Scott a beer, Mick thought for a second he was about to get decked.

Mick put five bottles in the fridge and popped the top on the sixth. The long pull of rich beer felt like cool water after he’d been walking for weeks in the desert.

“Nope. I got enough of that before I was even born, I don’t need any more.”

It only took half a beer for Mick to get past the uncomfortable feeling he should’ve asked Scott to tell him more, or that he should’ve switched to Mountain Dew. Scott rented an On Demand movie, something forgettable with vampires, and they sat in their places on the couch and divided their attention between the movie and the pizza for the next two hours. Tom camped out in his usual spot between their thighs, graciously accepting all the chicken and pepperoni tributes offered to him.

After the movie was over they watched another one on HBO, but didn’t pay much attention to it. Mick had a nice buzz going and was happy to sit back and listen to Scott talk about his project—the VW Microbus he was converting into a flatbed. A warm, fuzzy feeling Mick almost didn’t recognize as happiness set up camp in his gut, and life was good.

He thought, more than once or twice, that Scott leaned toward him in a way that was a little more than friendly, but it had to be the beer.

Mick jerked in surprise when he realized he’d started to lean toward Scott. He had no right to be “more than friendly” to Scott. None at all.

Scott reached out to grasp his shoulder. “You okay, Mick?”

“Are you ready for bed?” Scott kneaded his shoulder, sending a current through his body.

“It’s not very good. If you don’t want to finish it, that’s okay with me.” Scott smiled and sat back against the couch, releasing Mick’s shoulder.

He couldn’t help himself, he leaned forward. Only a little bit. He didn’t want to lose Scott’s touch. In that moment, he couldn’t think of anything more important than Scott touching him, not even self-preservation.

Mick Randall wasn’t a stranger to self-medicating with alcohol but before he found Bell’s he hadn’t had a lot of money to spare, and lately he hadn’t had the time. Together, those circumstances had turned him into a lightweight. That had to be the explanation for why he saw a come-on in every glance and heard innuendo where surely Scott didn’t mean any. He’d have to be a lightweight to want so badly to respond to Scott’s touch with an embrace.

Maybe I should quit drinking.

Mick wasn’t capable of walking in a straight line by the time he hit the can, but it didn’t matter. Four beers was plenty and he’d take the other two out of Scott’s fridge the next day and remember not to bring more. If he wanted a drink, he wouldn’t have to drive far. When he left the bathroom his thoughts centered on that warm, happy feeling, and what he could get up to the next day. Before he knew what was happening, Scott had him backed against the wall, both hands spread across his chest.

All that fuzzy warm happiness disappeared, replaced by a tiny shiver of panic mixed with a side of relief. The relief tangled with a mix of “fucking finally” and “what the fuck” that made Mick dizzy. Or maybe that’s just the beer.

“Scott. Maybe I should sleep somewhere else tonight.”

“I was thinking like my car, or a motel.” 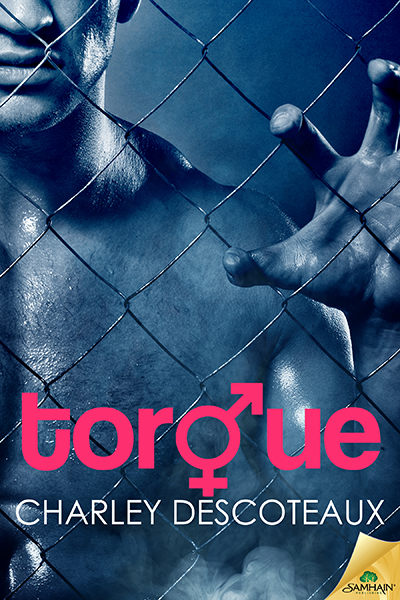 Scott frowned and pushed him back against the wall harder, caressing his chest and shoulders as he did. The contrast of the unyielding wall against his shoulder blades and the man in front of him spun Mick’s head around once. “You don’t feel anything like Mercy. I knew you wouldn’t.”

“Don’t you think Mercy would—”

“She wouldn’t care. I’m not the only one she fools around with.” Scott leaned against him, chest to chest, close enough to kiss.

“Let me go.” Mick took hold of Scott’s shoulders and tried to push him back, but Scott was stronger than he looked.

“What am I supposed to do now?” Mick couldn’t see a clear path to the door. Panic reared up in the back of his mind—he had no game plan for this, no idea what his part should be.

Mick tried to speak but couldn’t. He couldn’t get a decent breath either, not with Scott’s hands on him. He nodded and tried to pull himself together.

“Haven’t you ever hooked up before?”

“I know you’re not.” Mick squeezed Scott’s shoulders, anxious to learn how his skin felt over those hard muscles, how those muscles looked when he moved. “I know.”

“I’ve hooked up before.”

“Because it’s different with you. I mean, it would be— I can’t…”

“You think I’m an idiot? Too dumb to know what to—”

“No! No. That has nothing to do—” Mick saw something in Scott’s eyes that made the rest of that sentence turn to dust in his throat. He swallowed hard and was about to—no idea what he was about to do, but he couldn’t stand there forever—when he saw something else that stopped him. “You’re shaking.”

“Yeah.” Scott’s voice had a hard edge so when he surged forward, his erection pressing against Mick’s thigh, it was unexpected.

“I’m trying to keep from punching you in the face.”

“Why do you want to punch me in the face?”

“Because you’re pushing me away. I thought you liked me.”

“I didn’t say you were dumb. You’re not dumb.” Mick could barely speak past his desire, so his last few words came out as breathless as he felt. He’d started panting and the sound filled the short hallway. “Please don’t punch me in the face.”

Scott frowned, but fear and pain was mixed up with the anger and desire showing in his light bottle-green eyes. Mick felt it all right along with him.

“Maybe I should go.”

When Scott didn’t respond Mick slid against the wall, sideways. In just a few steps, Mick wasn’t supporting all of Scott’s weight anymore, didn’t feel his tense muscles or his heat. Mick gingerly pushed off from the wall and walked backward, toward the living room.

“I think I do.” Mick sat on the sofa to pull on his boots and Scott dropped onto the cushion beside him. Mick straightened, one boot on and one off, and Scott grabbed him and kissed him.

Meet the author:
Charley Descoteaux misspent a large chunk of her youth on the back of a Harley, meeting people and having adventures that sometimes pop up in her fiction. She grew up in the San Francisco Bay Area during a drought, and found her true home in the soggy Pacific Northwest. Charley has survived earthquakes, tornadoes and floods, but couldn’t make it through one day without stories.