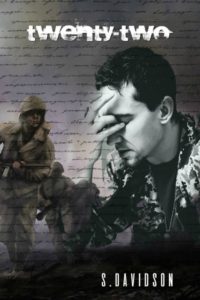 Taylor’s job was to photograph the spoils of the war. His instructions – make our military look good. Problem – the view was not always a pretty one. His obsession – keeping some of the worse images that he captured, often the last proof of what the depths a man will go to when faced with his own morality. Often, his images were so horrific, he didn’t dare let anyone else see, particularly the military.

Ryan ran a successful business, was well respected, and was raising two children. Surrounded by small-minded people, he didn’t dare come out as a gay man to his employees or his clients without the fear of losing business. Instead, he traveled miles from home just to keep his secret safe.

Twenty-two veterans commit suicide every day. Will Taylor be part of that count? Not if Ryan has any say in it.

Excerpt:
As he came through the doorway, he saw Brandon just stepping out of the bathroom, towel still around his waist. It wasn’t often he got a full-on view but looking at Brandon was something Taylor could never get enough of.

“Now I know I ordered my own personal cabana boy, but damn, I think I hit the jackpot!” he smirked.

Brandon chuckled. “Soldier, I say you have far too many clothes on. How about you do something about that before I do it for you.” He came at Taylor like a wild predator. Brandon was one of those guys who spent his time working out so to say he was built would be a disservice. One could cut diamonds off his abs.

“We have any alcohol in this place?” Taylor tossed his bag onto the floor of the bedroom and sat on the bed to untie his boots.

“Food, alcohol, lube, condoms, we have everything we could possibly need.” He grabbed a couple beers from the refrigerator and placed them on the counter before strolling back to the bedroom. “What did I say about those clothes?”

“I’m working on it,” Taylor laughed.

Suddenly, Brandon rushed him and tackled him back onto the bed. “Not fast enough.” He laughed as he wrapped his arms around his lover and brought their lips together. Taylor’s uniform was soon a heap of material on the floor as the two men celebrated in each other.

About S. Davidson:
Shelly has been writing M/M stories for years, beginning in fanfiction (ER, LOTR) and advancing to full length novels. While most of her novels can be considered romantic, they are far from your average M/M romance. They all include characters who are real, in pain, and most stories center around taboo topics – topics that are not usual subjects of a M/M romance novel. While not writing, Shelly spends time with family, runs an online Home Décor business and works a real day job.

Where to find S. Davidson: