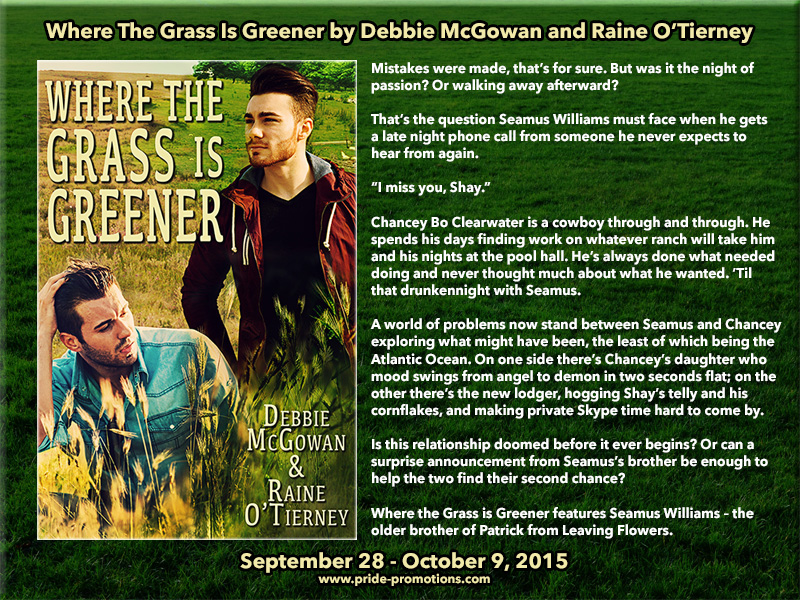 Today I’m very lucky to be interviewing Debbie McGowan & Raine O’Tierney, authors of Where the Grass is Greener! Hi Debbie & Raine, thank you for agreeing to this interview. Tell us a little about yourself, your background, and your current book.

Hello! We’re Debbie McGowan and Raine O’Tierney, two halves of a fantastic writing whole. We started collaborating early in 2015 and we’ve been writing recklessly together ever since! Our new book is Where the Grass is Greener (book 2 of The Seeds of Tyrone)–in addition, we’re working on book three, have almost completed a new humorous intrigue book, and are about halfway into something dark and mysterious. Any time our queue gets low, we just add things to the pile! Oh, we haven’t tried this…

Blurb:
Mistakes were made, that’s for sure. But was it the night of passion? Or walking away afterward?

That’s the question Seamus Williams must face when he gets a late night phone call from someone he never expects to hear from again.

Chancey Bo Clearwater is a cowboy through and through. He spends his days finding work on whatever ranch will take him and his nights at the pool hall. He’s always done what needed doing and never thought much about what he wanted. ’Til that drunken night with Seamus.

A world of problems now stand between Seamus and Chancey exploring what might have been, the least of which being the Atlantic Ocean. On one side there’s Chancey’s daughter who mood swings from angel to demon in two seconds flat; on the other there’s the new lodger, hogging Shay’s telly and his cornflakes, and making private Skype time hard to come by.

Is this relationship doomed before it ever begins? Or can a surprise announcement from Seamus’s brother be enough to help the two find their second chance?

Where the Grass is Greener features Seamus Williams – the older brother of Patrick from Leaving Flowers.

“Just tired, is all. Got a leaky roof and the fecker was drippin’ all the damn night. And didn’t I get up this morning and kick the bucket?”

“You look alive and well to me, so you do. I say well…you look like shite.”

“Yeah, thanks very much. Think I’ll go join the lads, see if I can’t get a few more insults thrown at me.”

Seamus gave the landlord a wry grin and went over to the others, who were already well into the first of the three games they got in every lunchtime. He watched one of them take a bad shot and accidentally pot the black, the clunking of the ball as it rolled its way through the machinery of the table setting Seamus’s teeth on edge. John was right: he was dog-tired and probably did look like shite. He’d barely slept after the missed call, trying to decide whether to return it or not. His mind played tricks on him, one minute convincing him it was urgent and he should call back, the next telling him to stay strong. He’d made the move. He’d come back to Ireland. That’s what he’d wanted all along. 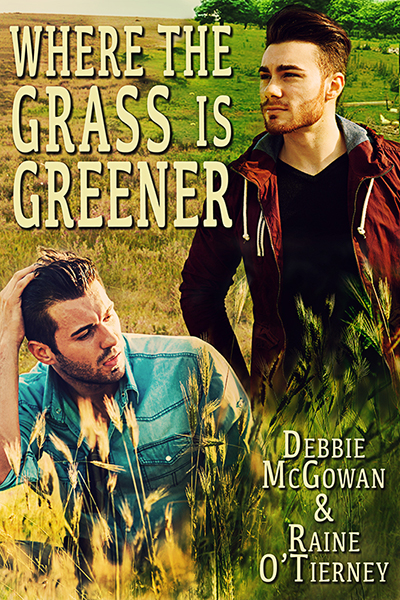 He had wanted it. Ever since Mam died, his sights had been set on coming home. He’d only stayed for Paddy’s sake, and now Paddy had Aidan there was nothing to keep Seamus in the States, although he was no further away from his brother now than he had been in Kansas. Never mind that he’d already made the decision before he knew Aidan even existed. No. It was a good decision. He was just—

“At last! I thought I was calling a wrong number. Man, it’s so good to hear your voice.”

“Er, yeah. Yours too. What’s up? Has something happened?”

The rapid-hard thump of Seamus’s heart filled the pause, two seconds, three, four, and more. He drew breath to speak, but there was nothing to be said. Or nothing he should say.

The first call had been a drunk dial. Thank the heavenly father that Seamus Williams hadn’t picked up. Lord, the shit that might have come tumbling out of Chancey’s mouth. Now he was dead sober, but only slightly more composed. Had he really just said he’d missed Seamus? He tried for a laugh. It sounded as fake as it felt. Well he had missed Seamus. Nothin’ wrong with that.

“You gonna say somethin’?” He knew he was putting on the accent. Drawing out his vowels, droppings his g’s. His grandmother—who was from south Texas and who had an accent so deep it was digging itself a hole to the centre of the Earth—used to yell at him when he’d get lazy with his words.

You jus’ sound ign’rant, Chancey Bo Clearwater. Full name, cue snickering cousins, and young Chancey sank down low in his chair, ashamed at the way he sounded despite the fact they all talked just alike. The accent followed him when he moved to Oklahoma, where he picked up a whole set of strange ‘O’s, and even having lived in Kansas now for the better part of his life, it was still there underneath, just waiting to crop up in stressful situations.

“I didn’t expect to hear from you, that’s all.”

“Surprise.” He was trying for friendly, for calm. Trying to keep the I wanna put my fist through the wall and did you really mean to let me find out through Lulu? out of his voice.

“Isn’t this call costing you a million dollars?”

“Skype. On my phone. I bought minutes, y’know?”

“Is that right then?”

“But I didn’t think. It’s probably charging you too.”

Is it? Seamus sure as hell wasn’t saying much. There was a long pause as Chancey considered his next move. He’d called because he’d wanted to talk. Not talk. Not like that. Nothing to say on that front. Seamus had made it all as clear as crystal dropped in the mud when he’d left his parting message with Lulu down at the pool hall, Rack ’Em. In a last-ditch effort, Chancey said the only thing he could think: “Boss Tina asked after you the other day when I went around for work.”

That got a laugh out of Seamus, which gave Chancey more relief than he cared to admit.

In celebration of the release of Where the Grass is Greener, we’re having a sale on Leaving Flowers
Normally $4.99, Leaving Flowers is on sale for 99 cents!!

DEBBIE McGOWAN is an author and publisher based in a semi-rural corner of Lancashire, England. She writes character-driven, realist fiction, celebrating life, love and relationships. A working class girl, she ‘ran away’ to London at seventeen, was homeless, unemployed and then homeless again, interspersed with animal rights activism (all legal, honest ;)) and volunteer work as a mental health advocate. At twenty-five, she went back to college to study social science— tough with two toddlers, but they had a ‘stay at home’ dad, so it worked itself out. These days, the toddlers are young women (much to their chagrin), and Debbie teaches undergraduate students, writes novels and runs an independent publishing company, occasionally grabbing an hour of sleep where she can.

RAINE O’TIERNEY wants to change the world…one sweet story at a time.

Known as “The Queen of the Sweetness” (well, a few people have said it anyway!) Raine loves writing sweet, character-driven stories about first loves, first times, fidelity, forever-endings and…friskiness? In addition to her solo works, she’s one half of a collaborative team with author Debbie McGowan.

When she’s not writing, Raine is either playing video games or fighting the good fight for intellectual freedom at her library day job. She believes the best thing we can do in life is be kind to one another, and she enjoys encouraging fellow writers.

Contact her if you’re interested in talking about point-and-click adventure games or discussing which dachshunds are the best kinds of dachshunds!

3 thoughts on “BLOG TOUR: Where the Grass is Greener by Debbie McGowan & Raine O’Tierney”