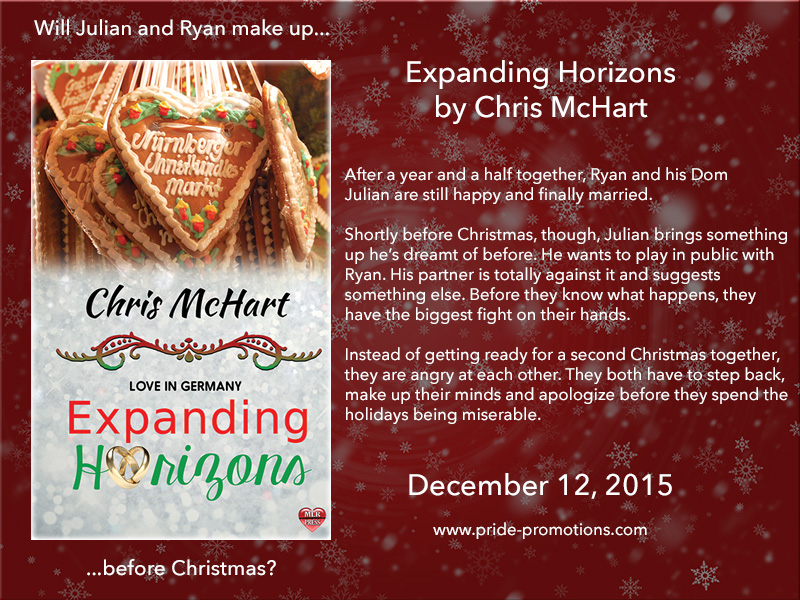 Blurb:
After a year and a half together, Ryan and his Dom Julian are still happy and finally married.

Shortly before Christmas, though, Julian brings something up he’s dreamt of before. He wants to play in public with Ryan. His partner is totally against it and suggests something else. Before they know what happens, they have the biggest fight on their hands.

Instead of getting ready for a second Christmas together, they are angry at each other. They both have to step back, make up their minds and apologize before they spend the holidays being miserable.

Excerpt:
I stared at my groom, totally speechless. He was really going to do this with me. Or I was going to do it with him. In either case, this was real. We were going to get married. Like, in ten minutes, we’d be a wedded couple. I swallowed against the lump in my throat. When he’d asked me a few months ago, I was all for doing it immediately. But now, as we were waiting for the last guests to arrive, my nerves were getting the better of me.

Ryan was my everything. My soulmate, partner, and sub, and I loved him more than anything. Spending the rest of my life by his side was my own personal heaven.

He’d moved to Germany for me, leaving behind his life and family in Phoenix, Arizona, as well as the heat. Currently, in the summer, it was okay, but he’d suffer quite a bit when the winter came. It would take a few years until he was used to the cold winters in Nürnberg.

Currently, Ryan was talking to his mother. His parents had flown in from the States to watch their son get married. I’d met them before and really loved them. They were great in-laws, and I knew they were truly happy Ryan had found a partner, even if it was half a world away from them. When we’d planned our wedding, we’d decided against our dads bringing us to the altar, so I was going to meet Ryan in the middle of the rows of chairs, and then we’d walk to the registrar together. This was going to be a simple civil union, since gays were still not allowed to actually marry in Germany, but for me, it was big. To me, it was marriage.

I tried to catch Ryan’s eye. It was time. We had a party scheduled and afterwards, I intended to have my very own celebration with Ryan. He was my sub for a reason, and I wanted to make sure he wouldn’t forget that on this very special day. 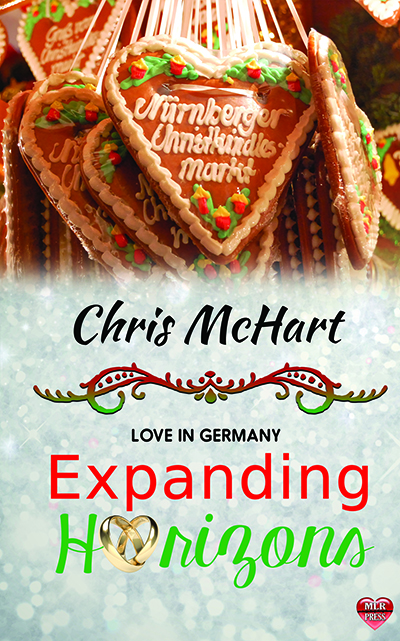 I limited our playing to the bedroom, something Ryan was absolutely fine with, but today, upon seeing him in his dark suit, I desired more. It wasn’t the first time I’d closed my eyes and imagined him on his knees, hands bound behind his back, while I showed him off in public. He was so gorgeous, so stunning, in his submission, and the dark suit accentuated it even more. He wore it as well as he wore my marks. I wanted to let the world know this man was mine. He gave his lust, his love to me, and I wanted everyone to see what was between us. This was one of the steps, and wearing a wedding ring highlighted it even more for me, but I wanted the other side, the BDSM side as well. I wasn’t too fond of public play, but with Ryan I found myself entertaining the thought way too often.

I had absolutely no restraint when it came to this man. We’d been together for a year and a half, yet I still wanted him so much. A shiver crawled down my spine. Later, I would put him on his knees and drive him out of his mind. He submitted so beautifully, and seeing him in the suit, and knowing he’d said “yes, I do” would make it even more arousing.

He exchanged a few words with his mother, then headed in my direction. I caught his gaze. A smile played around Ryan’s lips. He looked as happy as I was. We’d planned, organized, and scheduled for this day, and now it was finally here. I still couldn’t believe it. In an hour, we’d be married. I resisted the urge to pinch myself, and instead moved forward toward my future husband.

Ryan took my hand, the expression on his face radiant. The simple room in the city hall faded even more against his grin. And I was getting sentimental.

“Ready, my love?” I asked him, even though I knew he was.

We turned to the rows of chairs, where our families sat. Together, we walked to the registrar. Our hands were still joined as we stopped at the podium.

“Can we start?” the man asked kindly.

I couldn’t speak around the lump in my throat, so I only nodded.

“We are here today to celebrate a civil union between Julian Neumann and Ryan Aspen. Ryan Philippe Aspen and Julian Walter Neumann, are you ready and willing to pledge to share your lives with one another, in a committed and binding relationship?”

I gazed over at my partner. “Yes, I am,” Ryan and I said together.

“Do you, Ryan Philippe Aspen want to commit to Julian Walter Neumann?”

“I do,” Ryan declared in a strong voice.

The registrar smiled and I released a breath I hadn’t realized I’d been holding. Until this moment, it had somehow been unreal. Picking out the suits, the appointment to get our papers, the fact that our families were here, none of it compared to the fact that he’d really, truly said yes.

The registrar focused on me. “Do you, Julian Walter Neumann want to commit to Ryan Philippe Aspen?”

“I do,” I managed to say. My throat was nearly closed off. We were really doing this. I had no doubt Ryan was the one I would love forever, but it still was so surreal. Again, the urge to pinch myself rode me hard, but it would’ve looked suspicious if I’d done so in front of our witnesses and family.

“Then, by virtue of this office, I declare you lawfully joined in a civil union. You can kiss now.” The man smiled again. We’d talked about it before and told him we very much wanted the kissing part in the ceremony. While the whole affair was nothing big, this was something we absolutely didn’t want to miss out on.

Slowly, I raised my hand and rested it on Ryan’s neck, while he slipped his arm around my waist. Staring into his eyes, I drew him closer to me. With a soft sigh, our lips met for the very first time as a married couple. Holy shit.

His tongue teased my lips, and all too willingly I parted them. Ryan tasted like he always did, yet our kiss sent a shiver down my back. I loved him so very much. Shaking, I kept him in the kiss, our tongues dancing. The registrar probably hadn’t meant we should do this here, but I couldn’t stop myself. My fingers were buried in the short hair of Ryan’s neck, his arms were wound around my waist, and I couldn’t stop kissing him. I wanted to do so much more, but that really had to wait a bit longer.

Although, if we didn’t quit kissing soon, we’d have to leave the party before it even started.

With a last lingering kiss, I pulled back a little and opened my eyes. Ryan seemed as flustered as I was, his lips already shining and dark red like they always were whenever I kissed him thoroughly. He was on the verge of getting on his knees, if I wasn’t mistaken. He wouldn’t, not with his family here, but we needed to stop making out. I’d have enough time to play with him once we were at home alone.

And I would play with him. He needed it, and so did I.

Meet the author:
Chris McHart lives in Germany, with her husband, slave, Dom, partner in crime, and muse (all in one person, not even she’s that kinky!). She loves her husband, men in kilts and Scotch Whisky. Her idea of a perfect evening is to curl up with her laptop and write (the other options are not suitable to post in public).