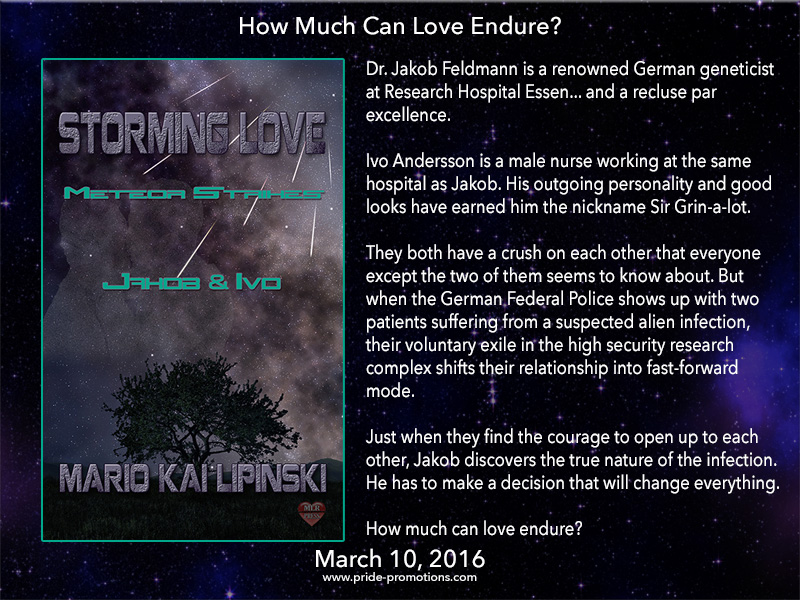 Ivo Andersson is a male nurse working at the same hospital as Jakob. His outgoing personality and good looks have earned him the nickname Sir Grin-a-lot.

They both have a crush on each other that everyone except the two of them seems to know about. But when the German Federal Police shows up with two patients suffering from a suspected alien infection, their voluntary exile in the high security research complex shifts their relationship into fast-forward mode.

Just when they find the courage to open up to each other, Jakob discovers the true nature of the infection. He has to make a decision that will change everything.

How much can love endure?

Excerpt:
“Emergency, emergency on floor seven! Dr. Feldmann’s eyeballs are about to drop out.”

Jakob flinched. “Shhh, not so loud.” He spun around. “Not everyone has to know.”

Marc may have been a capable physician, but he made a bull in the china shop look like a well-behaved customer interested in a delicate porcelain service.

“I think apart from the both of you,” Marc chuckled and that sound got Jakob’s ear canals dirty, “everyone else in the hospital is aware of your crush on each other.”

“He isn’t interested in me.” Jakob turned back and looked down the hospital hall again. Ivo was still talking to the other nurse, Sandra Gronder, right? How could such a cute guy be interested in Jakob “Average Guy” Feldmann? It took one look from those blue eyes, one sweep through that dark blond mass of hair, one smile with those perfectly white rows of teeth, and every man would drop down to his knees begging for a date, regardless whether that guy was gay or not. “I’m not in his league.” 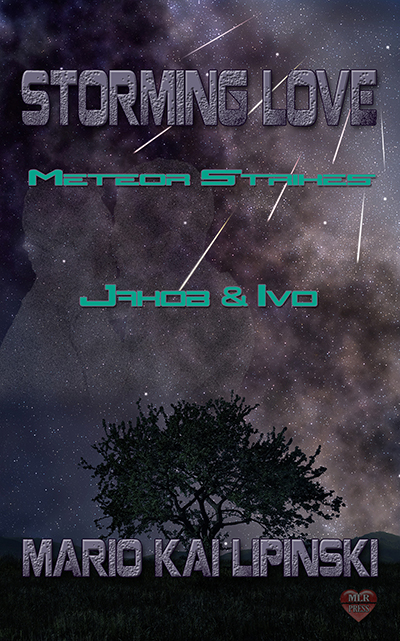 Marc groaned through his closed lips. “Oh fucking Jesus.” He reached into his pocket, got his cell out, and held it to his ear before offering it to Jakob. “It’s for you. The nineties’ rom coms are calling and want their clichés back.” He let his hand sink down. “You’re a doctor and he’s a nurse. You look at a nucleic acid sequence and give a perfect description of the person it came from. I won’t sleep with any chick for a month if you can name a better geneticist in the world than you, and I’m damn jealous. And he? He cleans bedpans and chauffeurs meals.”

“You’re a snob and a jerk.” Jakob would never become one of those demigods in white. That’s what he had promised his father and he would stick to that promise. “He’s twenty-seven. I’m thirty-three. And I don’t even know if he’s into guys.”

“Six years? You’re kidding me, aren’t you?” Marc huffed, blowing his nostrils. “As a male nurse, he most probably is gay or has been asked that question so many times that he doesn’t give a crap anymore. It’s the twenty-first century, you know? You can talk about who you fuck in public.”

Jakob closed his eyes, pushed down his glasses, and massaged the bridge of his nose. Marc was a snob and a jerk for real, but however much this turned Jakob’s stomach, he was also right. Jakob opened his eyes again. “That just isn’t me, approaching him and asking him out.” His elbow began to itch. Damn psoriasis! He didn’t need any reminder that he was nervous.

“I can ask him for you.” Marc took a step forward, but Jakob grabbed him by his arm.

“Are you crazy? No, no, please, no.” The embarrassment would kill Jakob. Slowly pining away, yearning for Ivo, didn’t seem to be that bad of an alternative to death.

Marc shrugged and tilted his head, a smug grin on his lips. “I only want to help.” Another filthy chuckle fouled the air around them. “Seriously, Jakob, get a grip on yourself and ask him. It’s not that difficult.”

For normal people, asking that simple question may have been a piece of cake, but for “Four-Eyes Jakob” and “Crumble Cake Skin Feldmann”? “I’ll consider it.” Perhaps another month and the crush would go away all by itself. They always did. He eyed Ivo again and sighed. This infatuation, however, might need some harder medication.

With another huff, Marc shook his head. “Okay. While you’re considering,” he drew quotation marks into the air, “let me share the newest rumors with you. A few minutes ago, two white vans with federal license plates pulled up at the security lock. Our friends of the BKA are back.”

The German federal police had paid them a last visit about a year ago when they had arrested a criminal with a suspected Ebola infection. It had turned out to be a false alarm though. “Did you hear anything about why they are here?”

“Nope.” Marc let the p plop. “I’ll be dicked anyway because they definitely won’t need an orthopedist unless Queen Angie sprained her ankle on a secret holiday in the Dolomites.”

Maybe they needed a geneticist? Helping to convict—or exonerate—a criminal would distract Jakob from Ivo at least. Was hijacking a doctor’s thoughts a felony? If so, Ivo was guilty: a cute rogue with a killer smile. Jakob lowered his head until his chin touched his chest. He had to stop spending all of his weekends reading fantasy graphic novels at home. At the age of thirty-three, he should have something better to do. With real people. He sighed once more.

Meet the author:
Mario K. Lipinski (born in November, 1975, in Germany) lives in Herne, Germany. He is a spare-time author and, in “real” life, is a mathematician teaching at university level. Does it show in his books? Yes, it does.

He is into romance with a capital R.