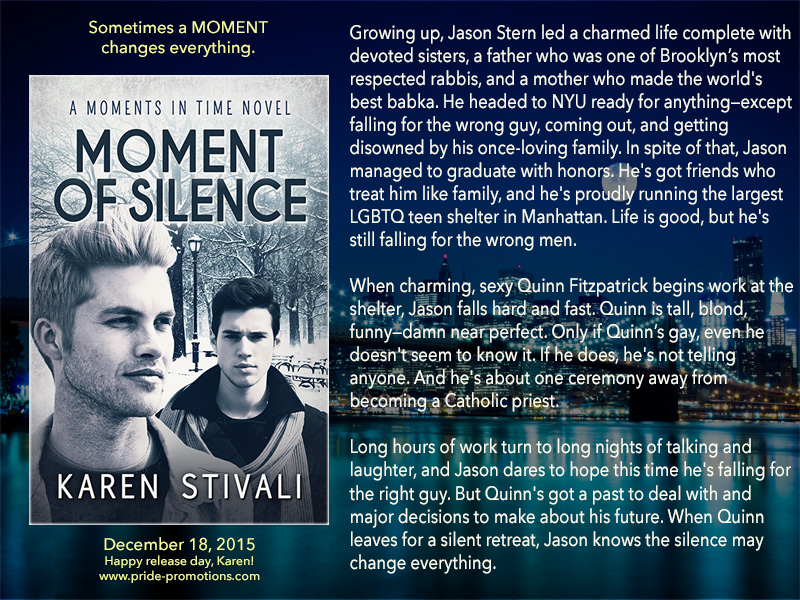 Blurb:
Growing up, Jason Stern led a charmed life complete with devoted sisters, a father who was one of Brooklyn’s most respected rabbis, and a mother who made the world’s best babka. He headed to NYU ready for anything—except falling for the wrong guy, coming out, and getting disowned by his once-loving family. In spite of that, Jason managed to graduate with honors. He’s got friends who treat him like family, and he’s proudly running the largest LGBTQ teen shelter in Manhattan. Life is good, but he’s still falling for the wrong men.

When charming, sexy Quinn Fitzpatrick begins work at the shelter, Jason falls hard and fast. Quinn is tall, blond, funny—damn near perfect. Only if Quinn’s gay, even he doesn’t seem to know it. If he does, he’s not telling anyone. And he’s about one ceremony away from becoming a Catholic priest.

Long hours of work turn to long nights of talking and laughter, and Jason dares to hope this time he’s falling for the right guy. But Quinn’s got a past to deal with and major decisions to make about his future. When Quinn leaves for a silent retreat, Jason knows the silence may change everything.

When Quinn wants to take a break before completing the ceremony to become a Catholic priest, his brother Collin sends him to work with Jason at a LGBTQ teen shelter that Jason runs.  Jason and Quinn quickly fall into a routine of working together, dinners out and comfortable time spent together.   It doesn’t take long before the sparks fly between these two and soon their friendship turns romantic and sexual.  They fall in love, their sex life is amazing, they spend almost all of their time together and their story is so beautifully heartwarming.  The problem is Quinn still has to decide if he wants to finish the ceremony to become a priest or give up priesthood to live his life as an out gay man with Jason.

Karen tells a wonderful story that is so rich with emotion, longing, and fraught with doubt and insecurities that I was immediately sucked in and couldn’t put the book down until I was finished.  I love an author that can make me feel the characters pain and joy, indecision and doubt.  I definitely recommend this book and the entire series.  I am most definitely a new fan and cannot wait to read more by Karen Stivali.

Excerpt:
Pierogi were just what the evening required. We got two orders, potato with fried onions, and cheese doused in butter. To round things out, we added a gigantic link of kielbasa and finished it all off with blueberry blintzes. By the time we were done eating, I was so full I could barely move.

“This was awesome.” Quinn licked a purple streak of blueberry off his fork before setting it down and pushing his plate away.

I was too mesmerized by the sight of his tongue to speak right away.

The waitress stopped at our booth. “All set?”

She placed the paper check between us, and Quinn reached for it, but I grabbed it first. “I’ve got this one. Make up for the popcorn you gave away.”

“You don’t have to do that.” He pulled out his wallet and put a twenty on the table.

“You can’t let anyone do anything for you, can you?” 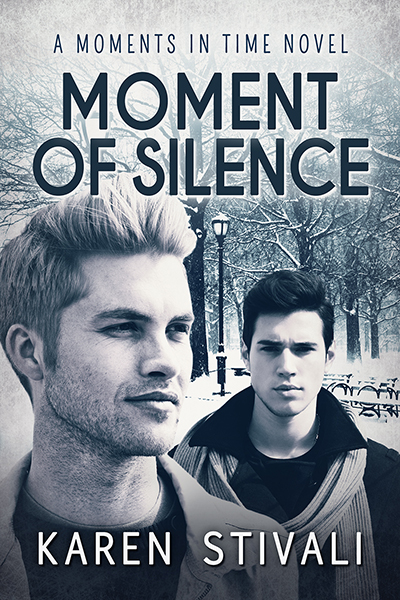 Quinn’s eyes bugged, then softened. “Yeah, I guess I do have a problem with that sometimes.”

“You know what they say. The first step is admitting you have a problem. And the second is letting me pay for dinner.” I stuck the check and enough money for the meal and tip under the glass sugar shaker, then grabbed Quinn’s twenty, folded it in half, leaned over, and tucked it into his shirt pocket.

My fingers were in the pocket before I fully realized what I was doing. Then the whole universe condensed into the drag of my fingers on that two-inch-square area of his chest. His rock-solid chest that tightened the instant I made contact. My own chest froze, devoid of air. I’d forgotten how to breathe. All I could do was think about the fact that I had my hand on this man who’d consumed my waking and sleeping hours for weeks. And I had to let go. Literally.

I pulled my hand away, trying to turn the rush of breath that returned to my lungs into something resembling a laugh. “Ready to get out of here?”

Shit. He’s silent again. Did he notice that moment of fantasy lust I just played out? What the fuck is wrong with me? Way to make him uncomfortable. Fuck—My monologue of self-criticism was interrupted by his hand on my shoulder.

His hand was probably a normal temperature, but given the heat it generated in my body, he might as well have been the Human Torch . Great. I’m not only in love with a straight priest, he’s also a superhero.

Quinn chuckled, and for a second I worried I’d said my crazy thoughts out loud. My face flushed to match the heat that coursed through the rest of me. “What?”

He handed me my keys. “You left these on the table.”

“Oh.” I took them, heat flaring through me in another rush when his fingers brushed mine as he placed the keyring in my hand. “Thanks. Geez. That would have sucked if I’d left those here.”

My phone buzzed in my pocket, and I nearly tripped over the step as we left the restaurant. It was a text from Campbell. I laughed. “Apparently my roommate’s having an orange juice crisis, as in we’re out of orange juice. I need to stop at the bodega on the way home. I feel like we’re married sometimes. In a weird, sexless way.” Stop talking. Now.

“It’s good you get along so well.”

I gestured to the store on the next corner. “You need anything?”

“Nah. I’m too full to even think about eating or drinking anything.”

“The power of the pierogi.”

He grinned. “See you tomorrow?”

“Get some sleep. Tomorrow we’ll work on those shelves. Unless you think we need to run the math one more time.”

“Just triple-checking your skills.” The teasing sound in his voice made me want to stay on that corner and talk to him all night. Anything to keep hold of the pleasant hum that was vibrating through my body. But then he turned away, heading toward his place, hand in the air in a backward wave of sorts. “Good night.”

!!SALE ALERT!!
Buy a bundle of the first three Moments in Time Novella’s for just $0.99 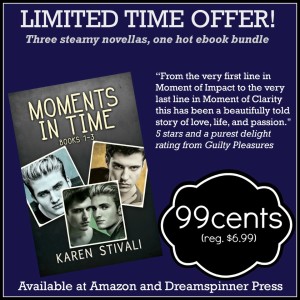 Karen’s lifelong fascination with people has led her to careers ranging from hand-drawn animator, to party planner, to marriage and family counselor, but writing has always been her passion. Karen enjoys nothing more than following her characters on their journey toward love. Whether the couples are m/f or m/m, it’s guaranteed that Karen’s novels are filled with food, friendship, love, and smoking hot sex—all the best things in life.

When Karen isn’t writing (and often when she is), she can be found on Twitter attempting witty banter and detailing the antics of her fruit-loving cat, BadKitteh. She loves to hear from readers (and other writers), so don’t hesitate to contact/follow/like her at:

Rafflecopter Prize: eBook copy of ‘Moment of Impact’ (Book one in the Moments in Time series)
a Rafflecopter giveaway