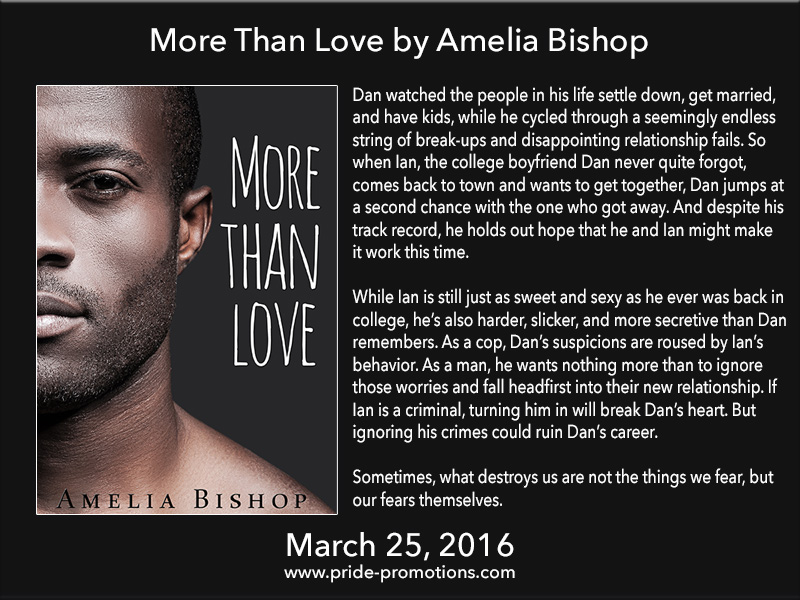 Blurb:
Dan watched the people in his life settle down, get married, and have kids, while he cycled through a seemingly endless string of break-ups and disappointing relationship fails. From time to time, he thought about the one that got away: Ian. The college boyfriend he’d never quite forgotten.

So when Ian comes back to town and wants to get together, Dan jumps at the chance to see his first real boyfriend again. And despite his track record, he holds out hope that he and Ian might make it work the second time around.

While Ian is still just as sweet and sexy as he was back in college, he’s also harder, slicker, and more secretive than Dan remembers. As much as Dan wants to fall head first into their new relationship, he fears those secrets, and worries what Ian might be hiding. Left unchecked, Dan’s doubt and mistrust could threaten his second chance at happiness with Ian.

Sometimes, what destroys us are not the things we fear, but our fears themselves.

Excerpt:
“Yep. Unless you want to skip it and go right back to your place. I could definitely be persuaded.” Ian raked his gaze over Dan slowly, then unlocked the car and ducked into the driver’s seat with a sexy grin.

“And how am I supposed to persuade you?” Dan buckled his seat belt as they pulled out of the lot.

“Use your imagination, it’s a half hour ride.” Ian shifted in his seat, pivoting his hips and drawing Dan’s attention to the bulge at his groin. 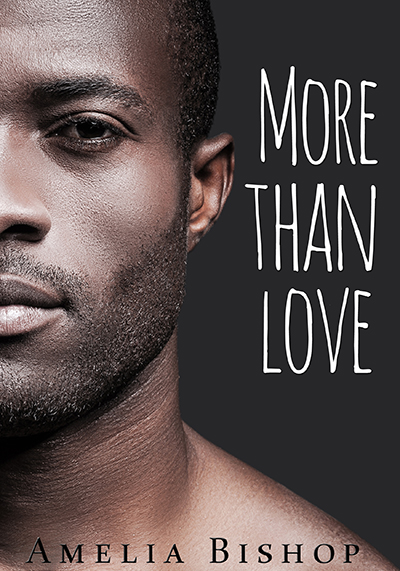 In the car, free from prying eyes and liberated by the cocktails he’d downed at dinner, Dan let his mouth do what it wanted. He licked Ian’s jaw, dragged his tongue down Ian’s neck, and sucked the hollow at his throat while running a hand over the front of Ian’s khakis.

“Careful, any more persuasive and I’ll run off the road.” Ian chuckled and leaned in to Dan’s mouth, a low rumble of approval vibrating in his throat.

Ian laughed and took one hand off the wheel, wrapping it around Dan’s head, holding him to his neck. “That feels great. God, I’ve missed you.”

Dan sucked up the skin under his mouth, not hard enough to leave a mark, but just until Ian moaned. He’d missed this, too. Somehow, no one had ever made him feel as sexy as Ian did, no one ever had given him the same thrill. For years after college, he’d tried to re-enact the frotting he’d enjoyed with Ian, but it never felt as fulfilling with anyone else. Most other guys expected penetration, which Dan was happy enough to partake in, yet somehow, even burying himself in someone else and pounding away wasn’t as satisfying as simply rubbing against Ian.

He was hard and Ian’s neck was damp when they finally reached his neighborhood. He managed to walk up the drive and into his house with some dignity, and even locked the door behind them. As soon as that was done, though, he went back to kissing Ian. Now he could freely take Ian’s mouth, which he did, and reached down to cup his ass for emphasis. Fuck, he felt good, all muscle and wiry strength.

Ian pulled back and pressed his forehead to Dan’s. “I want to be naked with you.”

Dan laughed at the blunt request, but he couldn’t deny he wanted the same thing. “This way.” He led Ian down the hall to his bedroom and undressed, throwing his clothes on the floor.

Ian did the same, and in moments they were both nude, standing by the bed. Dan was just drunk enough to not care about the slight padding around his middle, and Ian was sober enough to respond to Dan’s attention.

“So fucking sexy.” Ian repeated, and punctuated his words with a two-handed caress down Dan’s torso.

A spike of lust shot through Dan at the words and the attention, and he urged Ian onto the mattress.

Dawn gives More Than Love 4 ✨:
Dan and Ian met in college and had a steamy relationship that ended when Ian accepted a job in another state.  Eighteen years later, Ian is headed home and Dan wonders if they can pick up where they left off.

I enjoyed how this story went back and forth from present to past.  It have the reader the necessary details of the past as them became relevant to the present.  Both Ian and Dan are likable characters and Dan’s family is wonderful.

What I didn’t like…I thought Dan’s skepticism and doubt of Ian throughout the entire book was exhausting.   I kept waiting for Dan to just confront Ian, but he always put it off, usually because of sex.  The sex is another aspect of the story that I’m unsure about.  Neither Dan nor Ian like penetrative sex, which frankly I’ve never read in another book.  Although I didn’t dislike it, I did find it to be somewhat disappointing as a reader.

The storyline was somewhat predictable.  The ending not at all surprising though if I were Ian I would have told Dan to take a hike and move on.  All in all, the book was just okay to me.

Meet the author:
Amelia Bishop lives in New England, just a block from Narragansett Bay, where she walks almost every day of the year collecting shells, sea glass, and random pieces of garbage she considers “treasure.” Amelia believes there is magic to be found in almost anything if you look closely, and delights in revealing the extraordinary hiding within the ordinary. Her stories celebrate the most magical and extraordinary thing of all: love.

When she isn’t writing or walking along the bay, Amelia enjoys camping, hiking, painting, crocheting, cooking, and spending lazy days reading on the beach.

2 thoughts on “BOOK BLAST: More Than Love by Amelia Bishop”