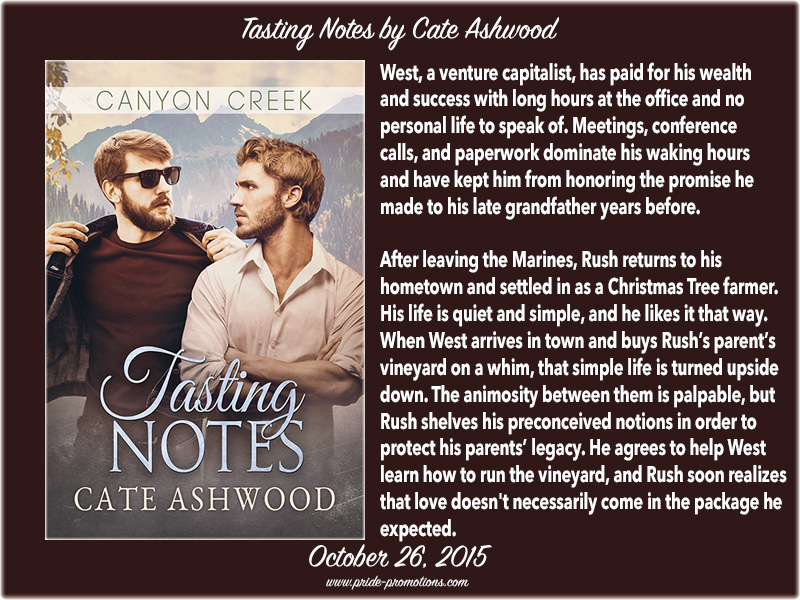 Blurb:
West, a venture capitalist, has paid for his wealth and success with long hours at the office and no personal life to speak of. Meetings, conference calls, and paperwork dominate his waking hours and have kept him from honoring the promise he made to his late grandfather years before.

After leaving the Marines, Rush returns to his hometown and settled in as a Christmas Tree farmer. His life is quiet and simple, and he likes it that way. When West arrives in town and buys Rush’s parent’s vineyard on a whim, that simple life is turned upside down. The animosity between them is palpable, but Rush shelves his preconceived notions in order to protect his parents’ legacy. He agrees to help West learn how to run the vineyard, and Rush soon realizes that love doesn’t necessarily come in the package he expected.

Excerpt:
The drive over felt the same as it always did. Rush thought his truck probably could have found its way anywhere in town, but the trip to Lennox Hill was one he’d made at least a few thousand times. It was weird to think the property no longer belonged to his family. Enough of his sweat had soaked into the soil that a part of him lived in that land.

He parked his truck in the same place as always and opened the door, calling to Casper to jump out before closing the door behind him. The door to the main structure was closed and locked. Rush peered through the windows of the wine room as he walked past, but the lights were off and the space was abandoned. Rush and Casper followed the pathway toward the house. Casper sat down as Rush knocked, waiting patiently for an answer. When none came, he knocked again with a little more force. West’s car was parked in the driveway, so unless he had decided to walk somewhere, he should be here.

A moment later, the door swung open and West stood there, naked from the waist up, his hair disheveled and his cheeks pink. 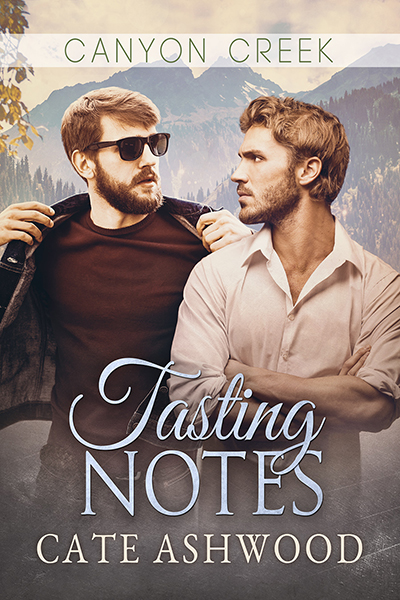 Rush saw red, which was a blessing because it kept him from seeing the way West’s body looked beneath his clothes. The guy was sleeping, and it was nearly noon. He’d owned the vineyard for less than a week, and he was already slacking off.

West stepped to the side to let Rush enter. He looked around. Everything was the same as he remembered it. The house was warm and comfortable, begging you to come in and stay a while. Rush had always loved this house. He peered into the living room, noting the two empty wine bottles on the coffee table.

“Is that a fucking wolf?” West demanded, breaking Rush out of his train of thought.

With a subtle nod from Rush, Casper sat next to his master, his eyes glued to West, but quiet.

West narrowed his eyes. “Why are you here?”

“I came to offer my help. You said you needed help, and my mom told me you didn’t know a fucking thing about running this place, so I figured I’d bail you out.”

“Because they’re my family, and you’re the dickhead who bought the place they poured their hearts and souls into. I’m not going to let you run it into the ground because you have some romantic fucking idea about being all sophisticated and worldly, owning your own vineyard. Not going to happen.”

“Look, what is your fucking problem with me?” West asked, crowding Rush’s space. “You’ve been nothing but a complete bastard to me since the moment you laid eyes on me. I haven’t done shit to you, and you’re giving me a rough time for no goddamn reason.”

Casper growled, but Rush calmed him with a gentle pat to the head. “Sue me if I don’t like spoiled little rich kids. You blow into town in your tricked-out sports car and think you can do whatever you want here because you have a shit ton of money. You take what you want without any regard for the people around you.”

“You don’t know a thing about me, but you think you’ve got my number. Well, you can go fuck yourself. You saw my car, and you made a snap decision about me. You didn’t bother talking to me or getting to know me at all before you rushed to judgment. Maybe you should give me the benefit of the doubt before you tell me who I am.”

“I don’t need to. I know exactly who you are. I’ve met guys like you. You’re arrogant, spoiled, and selfish. You put on a good front, pretending to be this philanthropic nice guy, but when it comes down to it, you’ll choose your money over everything else.”

“Oh, for fuck sakes. You storm in here, waking me up and screaming at me. In case you missed the memo, this is my home now. You’re on my property. What gives you the right to show up and give me shit about something you know nothing about?”

“Your name may be on the deed, but that’s as far as it goes, asshole. Lennox Hill is in my blood, and the last thing I want is for you to completely destroy it out of sheer ignorance.”

“Well, then there’s something we agree on. It’s why I came to your house in the first place, in case you need reminding about that. I don’t want this place to fail any more than you do, so how about you get your head out of your ass, stop being such a fucking prick, and help me?”

Rush stared at him, not saying a word. He hadn’t anticipated the conversation taking this turn. Hell, he hadn’t anticipated this conversation period. There was something there, behind West’s eyes, a kind of rawness Rush hadn’t expected. He stepped forward, his eyes locked on West’s. He felt drawn to him like a compass to north, locking onto that flicker of something unnamable.

He was not in control of his body. He pulled a quick intake of breath as the space between them evaporated. He was close enough that he could feel the crackle of electricity between them, as tangible as if West was statically charged.

“But this doesn’t mean I like you,” Rush growled.

4 Stars from Jessie
West is successful, lonely and burned out. Rush is a former Marine turned Christmas Tree farmer who doesn’t adapt to change easily. When West rides through town and impulsively buys Rush’s parents winery, he is understandably blindsided, but unreasonably angry. I could understand being upset that the winery was sold without his knowledge and that his parents planned their move without his knowledge, I could even understand a level of anger at West as the symbol of both those things—and a reminder of a past hurt—but the white hot violent reaction made it hard to like him as a character, much less West’s love interest.

But West needs help and Rush isn’t about to let some rich snob’s experiment ruin the winery’s reputations. Soon all that anger turns into scorching sex with a side of sweet. Add in Rush’s parents who were adorable (I have personally grabbed a meal on the way to my parents house, I get it) and West’s admin who just wanted to see her boss happy, and it was smiles all around. The Sebastian story line was “eh.” I just wasn’t feeling him at all, but I love a good redemption story too, so we’ll see if the author plans a book for him.

Overall, an enjoyable read complete with three of my favorite things—enemies to lover + wine + Christmas trees.

Meet the author:
Cate Ashwood wrote her very first story in a hot-pink binder when she was in the second grade and found her passion for writing. Her first successful foray into romance writing came five years later when she wrote her best friend, who was experiencing a case of unrequited love, her own happily ever after.

Cate’s life has taken a number of different and adventurous roads. She now lives a stone’s throw from the ocean, just outside of Vancouver, British Columbia with her husband, her little boy, and their two cats. Her life is filled with family and friends, travel, and, of course, books.