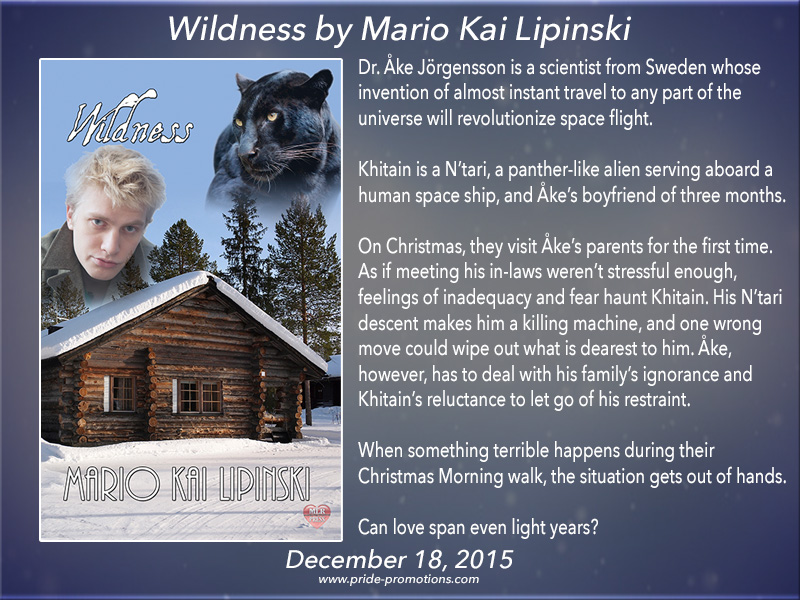 Blurb:
Dr. Åke Jörgensson is a scientist from Sweden whose invention of almost instant travel to any part of the universe will revolutionize space flight.

Khitain is a N’tari, a panther-like alien serving aboard a human space ship, and Åke’s boyfriend of three months.

On Christmas, they visit Åke’s parents for the first time. As if meeting his in-laws weren’t stressful enough, feelings of inadequacy and fear haunt Khitain. His N’tari descent makes him a killing machine, and one wrong move could wipe out what is dearest to him. Åke, however, has to deal with his family’s ignorance and Khitain’s reluctance to let go of his restraint.

When something terrible happens during their Christmas Morning walk, the situation gets out of hands.

Can love span even light years?

“So much water.” Khitain looked down at the fuzzy blue ball of Earth. “Your home world is beautiful.” As beautiful as his mate, but Åke didn’t like to hear such praise, so Khitain kept it to himself.

“I thought N’tar was also rich in water.” Åke stepped forward and pressed his forehead against the window of the landing pod. As always, some strands of his hair stuck out at the strangest angles. 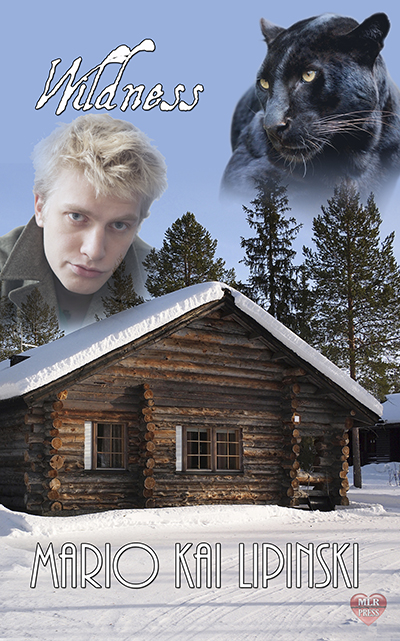 What was the human name for that color again? Oh yes, blond. The blueness of Åke’s irises flowed into the slightly darker shade of the water that reflected in the whites of his eyes.

“It is, but most of our water runs in subterranean rivers. Those are the oceans you told me about?”

“Yes, they are. See that landmass over there?” Åke pointed at the northern hemisphere. “That’s Scandinavia. Sweden’s over there.”

“If you strain your ears any more, they’ll fall off.” Åke grabbed Khitain’s hand. His tiny human fingers stood out so white from the grayness of Khitain’s fur. “You don’t have to be nervous. They’ll like you. And Emilia? She’ll simply adore you. Emi loves cats more than anything else.”

“It’s you who keeps telling everyone that I’m not a cat.” Khitain had seen holo vids of tigers, panthers, and lions. Of course, humans compared him with those. One of the panthers had even resembled his Second Aunt Eritruin, though the animal had looked friendlier. Much friendlier.

“Because you aren’t, but for Emi, you’ll be a walking, talking pussycat.” Åke bared his teeth.

Why did humans think that doing so was an amicable gesture?

“For them, you’ll be the guy their son loves.”

Or a disgrace to their family. A warrior and a scientist. Love goes strange ways. He snuggled up against Åke, whose head rested on Khitain’s lower ribs. “Your love honors me. May my love honor you.”

Åke pecked Khitain’s flank and nuzzled the fur until his nose grazed the skin beneath. When Åke’s parents saw how much their son and he loved each other, maybe they’d refrain from chasing him out of their home and at least tolerate a lowly soldier.

The pod decelerated and the counterforce of the inertia damper tugged at Khitain’s fur. The claw shape of Scandinavia filled the whole window now.

“We’ll land in Stockholm any minute. A glider will take us to Kårböle, and the house of my parents lies a little outside of the town.” Åke still leaned against Khitain, and his voice resonated in Khitain’s body. “Pappa offered to pick us up by car, but I thought you’d prefer a little walk.”

Khitain wouldn’t fit into that thing, that car. At least not into the models the ship’s computer had shown him, and moreover, he weighed more than those transports could load. Yet Åke wrapped Khitain’s shame up in a way that allowed him to save face. “I’d love to see the wilderness of Sweden.” He buried his nostrils in Åke’s hair and inhaled its smell, reminding him of mature Garraj fruits.

The city soared by beneath them, and the shiny facades of the new buildings reflected the stony images of the old. Human settlements reached so high into the sky, much higher than the low huts on N’tar. The pod came to a halt, hovered in the air for some seconds, and descended onto the landing platform. A jolt rocked the ship as it touched the ground. With a hiss, the hatch of the shuttle opened. Khitain inhaled. They had landed in the center of the city, and yet the air smelled of nature and life. How much he had missed those odors in the artificial atmosphere of the Charon’s Boat, and how much he yearned to return to the safety of the ship, a hundred light-years away from Åke’s parents.

He is a spare-time author and, in “real” life, is a mathematician teaching at university level. Does it show in his books? Yes, it does.

He is into romance with a capital R.