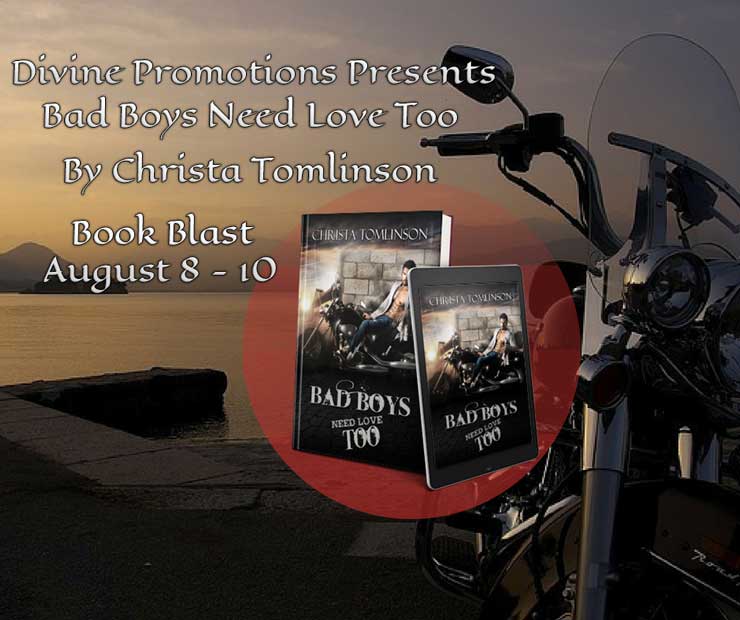 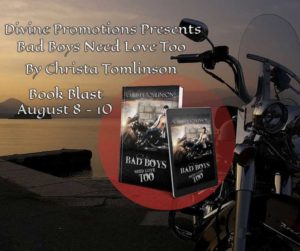 Hello everyone! My name is Christa Tomlinson and I’m here showing a little love for one of my older titles. Bad Boys Need Love Too was the second full length novel I completed. It tells the story of Gage Mason, a motorcycle mechanic and Joseph Naderi an up and coming lawyer.

I got the inspiration for this story as I was on a plane ride back to Texas. I had my headphones on and was doodling in my notebook, waiting for plot bunnies to hop by so I could catch one. Then Bad Boyfriend by Garbage came up on my playlist. As I listened, I envisioned a tough bad boy on the back of a motorcycle. He was quick tempered but charming. Rough around the edges, but naturally smart and caring to those he counted as family.

I knew I had to write Gage’s story. And I knew I had to give him a partner who was sweet and could soothe his rough edges. That’s where Joseph came in. But Joseph isn’t a doormat martyr. He gives Gage what he needs, even if it’s not always what he wants. And Joseph has some things to work through on his own.

It was a blast writing this story. Bad Boys Need Love Too is full of angst, drama and lots of sex. As I was writing, I listened to songs from Garbage, Joan Jett and Peaches to get me in the right head space. The influence from those songs was perfect, and helped me create the exact world I’d imagined on that plane ride.

I hope you’ll give Gage and Joseph’s love story a try. If you do, be sure to drop me a line and let me know what you think. Happy reading!
Love,
Christa 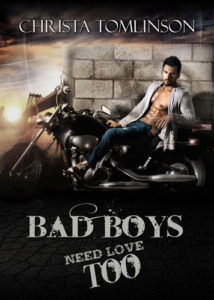 Why Do Bad Boys Make You Feel So Good?

Everyone has had their experience with him. The Bad Boy. The one with rips in his jeans and a lazy, devil may care smile on his mouth. The man who can make you do bad things that feel so good.

For Joseph Naderi that man was Gage Mason. They met when Joseph took his motorcycle into Gage’s shop for repairs. The second Joseph laid eyes on Gage he knew he was trouble, but something about the sexy mechanic drew him in. Maybe it was the dark eyes that studied Joseph like Gage wanted to know everything about him. Maybe it’s the way he made Joseph feel with the rough touch of his hands and a possessive grip on his hair when they kissed. Or maybe it’s the way Gage grows to need Joseph, even though he won’t admit it.

For once in his life Joseph is taking a risk. Despite everything that tells him he shouldn’t, he’s taking a chance to be with Gage. Joseph doesn’t know if it will end well. He just knows that he can’t resist that Bad Boy.

Bad Boys Need Love Too is a steamy gay romance full of drama, love, and explicit sex scenes. Gage and Joseph’s story is book one in a complete three book series.

Excerpt:
Gage settled down at the metal desk in his office to review invoices for parts orders. He’d only been at it for five minutes when he heard the sound of a motorcycle pulling up in front of his building. He could tell it was a racer by the sound of the engine. The shop was closed, but Gage still went to see who it was. If it was a friend, he’d let them in no matter the hour. But instead of seeing one of his buddies through the glass, he saw the distinct body of the Diavel he’d repaired last week and its owner, Joseph Naderi.

Gage smiled in pleased surprise and hit the button to raise the garage door. He hadn’t expected to see Joseph again unless he went after him. He knew he did careful and thorough work so there was nothing wrong with that bike. Which meant that Joseph was here because he wanted to see him.

Joseph rode in and Gage walked over to him as he shut down the bike and pulled off his helmet. Gage didn’t even try to keep the heat out of his expression as he looked at Joseph straddling his bike. Again he was dressed casually, and his long, curly hair was down, windblown from his ride. There was the faintest hint of a five o’clock shadow along the sharp line of his jaw and above the curve of his lip. And those gorgeous eyes of his were bright with excitement. This man was beautiful. Even in his jeans and tee, Joseph still looked fresh and neat and clean. Gage wanted to get him dirty. He wanted to see him sweaty with his hair even wilder and his clothes ripped and twisted half off his hard body. So many things he wanted to do, and now that Joseph was back it looked like he might get that chance.

Gage quirked a brow. “Obviously. What are you doing here? Bike giving you trouble again?”

Joseph shook his head slowly. “No. I uh… wanted to say thank you for fixing her. The ride has been smooth just like you said it would be.”

Gage smiled real slow and moved in closer. “You go around and personally thank everybody who does work for you? Your cable repair man? The guy who changes your oil?”

Gage gripped the bike’s throttle, watching as Joseph’s gaze dropped to his hand. He squeezed
the throttle once and saw Joseph’s throat working as he swallowed. “Tell me why you’re really here, Joseph.” Sea green eyes rose to look into his. They were so expressive that Gage could easily read his nervousness. Gage smiled again. “I already know but I want to hear you say it.”

5✨s – I went back and forth on this one for so long! Gage and Joseph…. Joseph and Gage… what a complicated relationship!

After meeting Gage at a garage he was referred to, to work on his bike, he couldn’t get the bad boy out of his head. His snarky attitude and chip on his shoulder was enough to keep him intrigued. He was hot, that was for sure.

Now, don’t get me wrong…. I loved Gage, his dirty mouth and the way he wanted Joseph was hot. But, he was also selfish… so very, very selfish and so many times did I want to punch him in the face for only thinking of himself…and Joseph for continuing to allow it! But you can’t help but want them together… we learn some of the things that make Gage the way he is. How he came to have the trust issues and the guilt over things he had no control of in live, but took the blame for. My heart really hurt for him. I could see where he was coming from and I understood, to an extent why he was the way he was. Despite him having awesome friends, he’d just never had someone push him the way Joseph did. It was hard at first…. okay, more than at first… it was a rough going there for a while, but it made everything so much more worth it in the end. They needed to do what they did to get where they needed to be.

What I loved about this story is that it wasn’t rushed. It was realistic in terms of baggage and relationships, especially new ones, and opening up to someone when it’s so different from your norm. Gage went from selfish man-whore to someone Joseph deserved, because he loved him and Joseph helped him want to be better.

Gage helped Joseph let loose and do things for himself, things he was scared to do before. I also loved things working out with Joseph and his family. I was really rooting for that too.

Overall, this was a great story that I’m kind of mad at myself for putting off reading for so long. I really enjoyed the realness of it and how relatable these two guys seemed. I’m really looking forward to reading more in this series ! I can’t wait to see what happens next, hopefully with Max! 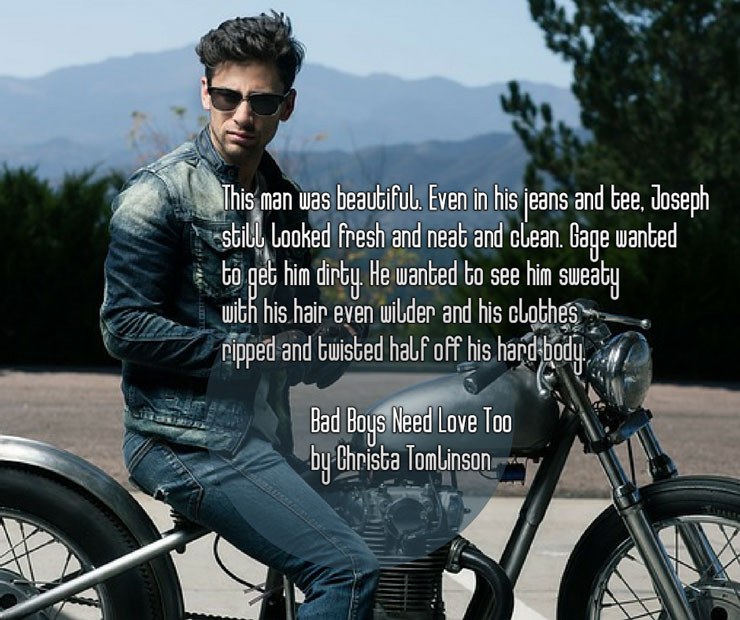 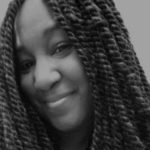 Christa graduated from The University of Missouri-St. Louis with a degree in History. She loves to create stories that are emotional and lovely with sex that is integral to the characters’ romantic arc. Her books include straight couples, curvy couples, gay, and multicultural couples. Love is love and everyone should have their story told.

Christa lives in Houston, Texas with her two dogs, and is a retired roller derby player.

Where to find Christa Tomlinson: