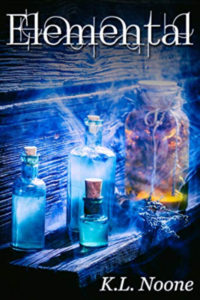 Daniel Rose should be having a good night. He’s a bestselling author; he’s had film adaptations of his books; he’s met movie stars. And there’s a storm outside tonight, electric and wild. Dan’s always liked storms.

Tonight, though, he’s stuck staring at his computer and suffering from writer’s block, out of ideas and inspiration. But when an adorable young man knocks at his door, asks to borrow Dan’s kitchen spices, and announces witchcraft’s real and their apartment building needs an exorcism, Dan’s dark and stormy night takes a turn for the magical.

Guest Post:
Hi, I’m K.L. Noone, and in honor of my new release, I’ve been thinking about magic and the word “elemental” – hence the title!

We tend to use the word to mean something obvious, something distilled down to the pure plain clear core—the, well, elements—but also as something magical: the components of a spell, the language of alchemy, the heart of a star or the world or a story.

In “Elemental,” I wanted to play with both of those ideas. Sterling is a witch and a psychic, and he’s very good at what he does, and he definitely needs ingredients for spellwork—but there’s also a component missing in his life, and that’s someone who looks at him with delight and excitement about what he can do, rather than the powerful family he comes from, where he’s actually one of the less remarkable members. And Dan is a writer who, at the beginning, is having difficulty writing, despite previous success—he’s lost that spark, that joy, that inspiration. He needs something, or someone, to re-enchant his world. A missing element, as it were.

“Elemental” is part of the JMS Books “Dark and Stormy Night” themed releases, and as such, it opens with this line: “The night stormed. The dark got darker.” And on this particular stormy night, Dan and Sterling find each other (and some ghosts, both friendly and not, in a haunted building), and magic happens—both literally, and emotionally, as they discover those missing elements in each other.

I hope you enjoy the discovery along with them!

Click to read excerpt
The young man tipped his head to one side, and crossed arms, and lounged, evidently content to continue propping up Dan’s door until it gave in and opened. He might’ve been a pocket-sized and cuddly James Dean, a lazy kittenish rock and roll star, a stray bit of celebrity come over to pop hypothetical pink bubble-gum and literally experimentally nudge the door with one sock-foot.

He looked tired, Dan thought, and then wondered why that’d been the thought. Weariness in that posture? In the slump of those shoulders against the doorframe’s support? In the faint lines around those eyes, the smudges under pale color, like bruises threatening opals? In the glance back down the hall, and a defeated sort of shift of weight?

He became aware that he’d been staring creepily through his own peephole for far too long.

He swore at himself. He yanked the door open. Too fast, too fast and clumsy, though those pretty grey eyes didn’t even flinch—

“Hey,” said all that insouciance, tossing a glorious worn-out smile his way, not moving, “you wouldn’t happen to have any feverfew or curry leaves, that’s the plant not the spice, or at least some cumin or garlic, would you?”

“It’d be really awesome if you did. I’m kind of out of everything, my fault, I didn’t realize how much I’d need in this building. And I’ve got the universe’s worst headache.”

“Are…you…cooking something? Come in,” Dan added belatedly, and shuffled a step back, making room. “I mean, um, I think I have aspirin or something? Somewhere? I also think I have garlic. Um. Hi. Seriously please come in. What was that about this building?”

“Let’s say I said yes to the cooking question. Is that a spice rack? Can I look through it? Oh, wow, that’s totally a picture of you with Tom Sloane, right? Is that from the film premiere of Stone Heart? He’s seriously the best-ever possible casting for Johnny Stone, with those shoulders and that super-heroic social media presence. Are those proper steel knives? Can I borrow one?”

“…what,” Dan said again, helplessly trailing sunny worn-out excitement into his own kitchen. His young man moved as if even breathing required energy and occasionally paused to rub a temple, wincing, but apparently was one of those people for whom exhaustion transformed into verbal rambling. Either that or some amazing drugs were in play, which was a distinct possibility.

Somehow he didn’t think so, though. Those pretty eyes were tired, but clear and focused. The fingers now investigating his spice rack—he’d barely looked at it, a housewarming gift from his agent, who occasionally tried to get him to be an adult and not live on pizza and frozen waffles—were swift and steady. “Oh, good, you do have cumin…and rosemary, awesome…dried, but that’s okay, I can work with that…”

“I do? What did you mean, let’s say yes about the cooking?”

About K.L. Noone:
K.L. Noone teaches college students about superheroes and Shakespeare by day, and in her not-so-secret identity writes romance – frequently paranormal or with fantasy elements, often LGBTQA+, and always with happy endings! She also likes cats, tea, and the sound of ocean waves.

Interview with K.L. Noone:

Where to find K.L. Noone: