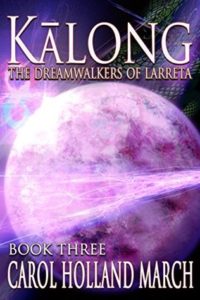 The gripping conclusion to The Dreamwalkers of Larreta trilogy.

Leo has found the source of the deadly time rifts threatening Larreta. His new life with Jesse is unfolding when a rift pierces Larreta and seizes him. Leo finds himself on the dark planet Kālong.

No one has ever left Kālong, but Leo must return to Jesse. He sets out to find Kālong’s ruler and teams up with Ballan, a Horse That Once Flew, to escape the dying world.

On Larreta, Jesse grieves for Leo. Refusing to believe his lover is dead, he begins the Call of Grief. Joined by other dreamwalkers, Jesse’s Call reaches across time and space for Leo, but the cost is high and his energy wanes.

On Kālong, Leo learns the truth that has kept him from Jesse for so long. When the mysterious being who causes the time rifts informs Leo that Jesse is calling him, Leo returns the Call, although the effort may end his life.

Searching for each other, the dreamwalkers of Larreta find themselves facing a door that hides the key to ancient mysteries. All they have to do is open it.

Leo faced her. “What do you mean?”

“We must return to Jesse. He called for you longer than any dreamwalker has ever called and in all that time, he did not speak or drink or rest. His life force ebbs.”

Leo sensed fear in Nara. Her lights had paled. “He’s in danger?”

Ananta lowered her head to his level. “When the Mentors arrived on Kālong, I ceased to breathe on the passageway. It collapsed, as you did. When you ceased your call, your consort could not maintain his focus. Now nothing connects our worlds.”

Leo clenched his teeth. “I am sick and tired of being played. Tell me the truth, snake. Are the dreamwalkers you stole from Larreta still here?”

Ananta swung her head over his, causing a breeze to form. “I secreted them away so you would not be distracted.”

Leo swallowed. “You must release them now.”

“I have a desire only she can fulfill. If she complies, I will recreate the portal. Your beloved lives, dreamwalker, but he grows weak. I feel him through the connection I placed in his field when you found me with your time passage.”

Nara’s lights flashed. “That connection remains. Will you use it to harm him?”

“All who wish to leave may.”

Leo stepped closer to the snake. “Bring me the dreamwalkers you have secreted. After I see that my friends are alive and well, you tell Nara what you want.”

Ananta lowered her head to the grass. “You push your luck, human.”

If she loosed her forked tongue, it would skewer him as effectively as her fangs. Leo swallowed. “Your world was lost. You’ve manipulated us into the position you wanted, but if we don’t go back, you’ll stay lost. The ruler will decimate your world again and your efforts will be for nothing.”

Ananta’s yellow eyes never wavered from Leo. “You are braver than I thought.” She turned and slithered along the ground toward the highest hill that bounded the meadow.

“I understand, Nara.” Leo’s breath came in gasps. “All of this – the rifts, the portals closing, Jesse and Sara coming at exactly the right time, my bargain with you, everything – it all fits together because it’s one thing. I’m here because I love Jesse. Because I’ve always loved him. But I am here. I brought you here. If we’re going back, we’re all going.”

He hoped he was right.

I’m coming, Jesse. I love you and I’m coming back, but I can’t leave the others behind.

About Carol Holland March:
Carol Holland March lives in Albuquerque, New Mexico, one of the last places where the veil between the worlds is visible. She writes about the intersection of dreams, reality, and time, and, of course, love. She has published short fiction in various magazines and anthologies. Her books are published by Ellysian Press and Fireborn Publishing.

Where to find Carol Holland March: