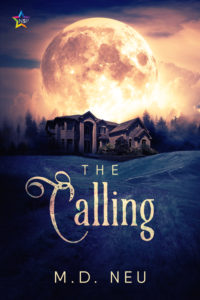 Being a nobody isn’t Duncan Alexander’s life goal, but it’s worked for him. He has a nondescript job, a few good friends, and overall he’s content. That’s until one fateful trip to San Jose, California, where he is “Called” to meet the mysterious Juliet de Exter. Juliet is a beautiful, wealthy, powerful Immortal who is undertaking The Calling—a search for a human to join her world of Immortals. Inexplicably, Duncan’s calling is more dangerous than any of the Immortals, even Juliet, ever thought it would be.

There is more to this nobody, this only child of long-deceased parents, than anyone thought. When Duncan experiences uncontrollable dreams of people he doesn’t know and places he hasn’t been, Juliet and the other Immortals worry. Soon, his visions point to a coven of long-dead witches. The dreams also lead Duncan to his one true love. How will Duncan navigate a forbidden romance with an outcast Immortal? How will he and the others keep the balance between the Light and Dark, survive vicious attacks, and keep the humans from learning who they truly are? More importantly, who is this implacable foe Duncan keeps seeing in his dreams?

I once believed there was only one definition: your body stops functioning, your soul leaves and what’s left turns to dust. That was what I thought, until it wasn’t.

I’ve discovered when you’re a nobody, the world can be an amazing place if you want it to be. Your life can change in a heartbeat and not make the least bit of difference to anyone but you, or so it would seem.

That was my case.

I’m by no means whining or complaining. I had a job, a small place to live, and friends, but no real family, and that was something I desperately missed and wanted. My life wasn’t bad and I was happy. However, I was just a random person, one of the many faces you see on the street and never glance at twice. It was dull. Of course, as with me, the majority of society didn’t know our world had hidden secrets, unseen by most.

The other important thing I want you to realize about me is that before I met her, I wasn’t a lucky man, not with money and certainly not with love. I made enough to live on, but never enough to take fancy trips. My idea of travel was staying at home and watching movies. That was my price range. And as for love, it was forgettable.

The day my life changed was like all the others, until it wasn’t. It was August 19. The year isn’t important. But we had finished celebrating the Olympics, and in a few short months, the country would be picking between the lesser of two evils for president.

I sat at an outdoor café in Santana Row. I’d spent the afternoon going on a tour of the Winchester Mystery House. Once my stomach had started to growl, I decided to grab a bite to eat.

I had come to San Jose, California for a vacation that I couldn’t afford and didn’t particularly want to take. Why San Jose? Why not San Francisco or Monterey or Vegas or Yosemite? To be honest, I don’t know, but it’s like everything inside and around me pulled me there. Out of the blue, I got emails from the San Jose Visitor Bureau. My dreams were filled with images of the city and the surrounding hills and mountains. It seemed that old song, “Do You Know the Way to San Jose” by Dionne Warwick constantly played. Still, San Jose isn’t the place most people consider for a ten-day vacation, especially someone alone who had never been to the Bay Area before.

Despite my apprehension, from the moment I arrived, I immediately felt at peace. I’d never been this calm or relaxed anywhere before, not even at home. There was another reason for me coming here, one I didn’t understand yet, at least not on a conscious level.

I would find out why soon enough.

3.5✨s – I kind of went back and forth on what to rate this book. I wasn’t sure if I liked it or if I just couldn’t look away. This book doesn’t say it’s the first in a series, but it’s set up that way. Most of it is setting up the world the characters live in, don’t get me wrong, I enjoyed it and think it has great potential, but the actual story didn’t happen until the last half of the book. We got hints of it, but we didn’t get to see it. I would have preferred all the set up to be in a novella where Duncan learns about the immortal world and then have a book come after it with a more fleshed out plot.

Duncan is a good character, if not a little over dramatic at times. There’s almost zero romance, there is a romantic interest but it takes a backseat to setting up the world. I feel like this book ran a little long for what it was. I can only pray that there’s more. Because I’m interested in reading on. The world is set nicely and all the characters have potential to make a whole series.

About M.D. Neu:
M.D. Neu is a LGBTQA Fiction Writer with a love for writing and travel. Living in the heart of Silicon Valley (San Jose, California) and growing up around technology, he’s always been fascinated with what could be. Specifically drawn to Science Fiction and Paranormal television and novels, M.D. Neu was inspired by the great Gene Roddenberry, George Lucas, Stephen King, Alice Walker, Alfred Hitchcock, Harvey Fierstein, Anne Rice, and Kim Stanley Robinson. An odd combination, but one that has influenced his writing. Growing up in an accepting family as a gay man he always wondered why there were never stories reflecting who he was. Constantly surrounded by characters that only reflected heterosexual society, M.D. Neu decided he wanted to change that. So, he took to writing, wanting to tell good stories that reflected our diverse world. When M.D. Neu isn’t writing, he works for a non-profit and travels with his biggest supporter and his harshest critic, Eric his husband of nineteen plus years.

One thought on “BOOK TOUR: The Calling by M.D. Neu”