Blurb:
Paris Hansworth, star whore turned senator and the most powerful man in City M, has been hiding his terminal illness for years.  Searching for a way to reverse the toxic environment that’s killing him, Paris stumbles upon a lost research facility, and a merman named Rain.

Years alone has made Rain long for companionship, and the beautiful man on the other side of the glass intrigues him. But Rain speaks the wrong language, and is decades out of touch. He isn’t quite sure what to think of the new environment he’s been thrust into.

As a virus spreads through the city targeting City M’s most private residents—A-Ms—Paris realizes he’s out of time. He’s willing to sacrifice everything, even his own life, to stop it. But Rain might just be the missing DNA link to explain the mutations created in the last plague, maybe even the cure.

Watching Paris race to save his friends, Rain knows he’s found someone special and will do anything to stay by his side. But the past Paris thought he’d escaped is seeking revenge, and he’s forced to adapt yet again, possibly even becoming a monster. He only hopes Rain will still want him.

Excerpt:
When the light aura faded from his sight he began to move the mobile unit again trying to find the small blip he’d seen before. Again just on the edges of the screen, so Paris turned the unit, following the movement. The snow was heavier this way, but when he looked back he could still see the copter in the distance and the people spread across the ice with different equipment.

The tires on the mobile unit spun as it hit something and was apparently stuck. Paris frowned and went to dig it from a fairly deep snow bank. It was wedged far enough that he had to chisel a bit of ice away to unhook the front from an unusual ice shelf. It probably wasn’t more than a few inches higher than the rest of the ice, but it had a lip. Paris hoped the mobile unit wasn’t damaged. He set it down and brushed the snow away from part of the shelf. The edges were shaped like water had spilled over the top and frozen—a sort of tiny waterfall. The snow was loose and light, so Paris shoved it aside, glad Candy had made him take two pairs of mittens instead of his normal driving gloves. The cold froze him to the core regardless. At least his hands weren’t numb yet.

The shelf was probably four feet long by six feet wide. Paris leaned over the cleared edge and brushed away the last bit of the snow. Maybe the facility was here and that’s why the water seemed to come up. Oddly the ice over the shelf was dark instead of white. Did that mean it wasn’t solid? He wasn’t dumb enough to try to step on it. 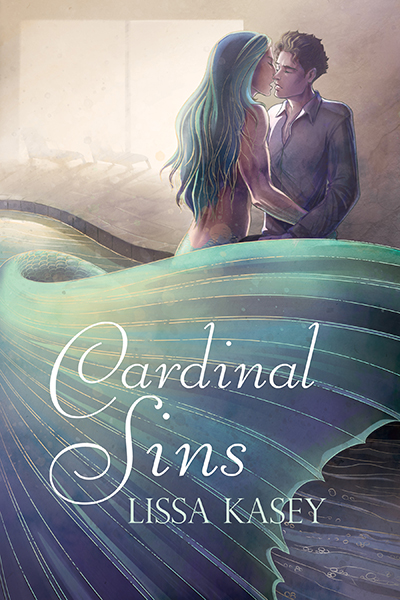 Paris picked up the mobile unit and set it on the shelf, moving it around for a scan. The ice was very thin. Less than a foot deep. How odd. Still there was nothing moving. Paris had hoped to find some sort of exotic fish or something so he could tease Aki relentlessly about his mermaid dream.

Something appeared on the screen just as Paris was reaching to put the mobile unit away. What was that? He stared at the screen as the blip came closer and got larger. He peered over the edge into the dark murky depth, not expecting to see anything at all. Most people would have been blind out here anyway. Paris’ night sight was better than most. He could almost make out a shape in the darkness. Was there something down there? The scanner was thermal so did that mean whatever was down there was cold blooded—perhaps had even adapted to the cold of long brutal winters and icy water?

He set the scanner aside and crouched low beside the shelf, then brushed away a bit more snow. There it was again. Something was moving down there. Something large. It could have been a fish, maybe, but a very big fish. There was definitely a fin. Whatever the movement was it was further to the side than Paris was. He got up and brushed the snow away, walking carefully around the edge just in case the ice wasn’t as solid.

The scanner began beeping—a signal that something large was close. Paris stared through the thin sheet of ice watching for movement. Was that something right there? He leaned forward, hand on the ice to steady himself.

Suddenly a face appeared on the other side of the glass. Not that of a fish, and not quite a person. A hand reached for him. Paris stumbled backward breath caught in his throat. What the hell was that? The ice thumped like whatever was on the other side was trying to get through. Paris took another step back. There was only a half a second warning of crackling before he was suddenly falling through the ice, though thankfully not into water. He rolled a few times, hit a few things on his way down but landed in a pile of fluffy snow surrounded by what seemed to be a frozen water fall.

“Holy fucking hell.” Paris sucked in a few heavy gasps before floundering his way out of the snow pile. Even with his good night vision everything was pitch black. The moonlight trickling through the break in the ice above gave him the impression of ice over rock, but he couldn’t be sure. He flicked on the light attached to his suit, happy it hadn’t been broken in the fall.

The ground was solid concrete here—not ice—or at least as far as he could tell it wasn’t ice. Very faintly over the far opening enclave that led off to darkness there was a number. Five. Apparently he’d landed in the middle of the missing facility. Part of it. The Great Lakes facility had twelve aqua ducts and tanks, all containing different species of fish. There had never been an official area for APs since APs were not known by the general public. Paris wondered if any of the records were intact. Everything seemed to be under heavy sheets of ice and water.

He pushed the button hoping it would work and turned on his tracker. “Aqua duct five, I believe. Down a very deep hole. Watch out that first step is a killer.” He stared up at the broken layer of ice that had formed over what appeared to be an old stairway that was now covered in several haphazard layers of ice. Had there been a building on top of all this at one time? That made sense didn’t it? It would have been washed away in the flood.

A moment later several lights peered down the hole. “Do you need a medic?” One of them asked. The others were talking about rope and equipment, not sure if they had anything long enough to get them in and out or even pull him up. If Paris hadn’t slid his way down and landed in a pile of snow he’d likely be dead. The drop was over fifty feet.

“Nothing broken,” Paris shouted back. Bruised, sore, but mobile. The giant wall of ice in front of him was actually glass with a layer of ice over the top making it somewhat murky. “Did you really see a face, Hansworth?” He asked himself. “Soon you’ll be babbling about mermaids like Aki. It was probably just your reflection. Couldn’t have seen much through ice that thick anyway.” He adjusted the cuffs of his jacket and glared at the dark space beyond. The light reflected back his own weary face. His mask had fallen off in the fall, but toxic air couldn’t do much damage to him anyway. He was already dying. No need to dwell he reminded himself. He wasn’t one to focus on the misfortune of the past. He was wealthy and powerful. No one should pity him. Not even himself.

Something was glowing on the other side of the glass. Paris clicked off his light. The men above called to him that they were coming down. He ignored them. The brightness intensified. First in green, then blue, and finally purple. Not one or two things but hundreds lighting up to illuminate the darkness beyond the glass. Fish. Nothing Paris recognized from any file or book, but hundreds of glowing fish swirled and moved beyond the glass. A few even came close enough to brush by his outstretched hand like they knew what he was.

“Fish don’t look like people,” he told himself. These fish were beautiful. Something that might be found in the deepest ocean. Some looked deadly with large teeth and long antennae. Most were longer than Paris’ arm, a few as small as his hand. They moved in schools circling close before moving away.

Paris found an almost boy-like joy in watching them. He’d never experienced an aquarium before. There were two left in all the united cities, one on the west coast and one on the east coast. He’d never had time to go to either. Of course he grew up with videos that showed him of such things. Virtual environments could almost simulate going to one of these places. Or at least that’s what he’d thought until now.

The fish moved aside, seeming startled but unafraid by something else moving close. Paris watched with fascination as something swam toward him he was sure wasn’t possible. Hot damn, he owed Aki an apology. It stopped before the glass, reaching out to lay webbed fingers over where Paris rested his mitten-covered hand. A mermaid? Merman? Paris couldn’t tell as it was a swirl of fins and hair, but it did look sort of human on the top and all fish on the bottom. Multicolored scales decorated its torso in batches and even covered a good deal of its face. How odd.

Meet the author:
Lissa Kasey lives in St. Paul, MN, has a Bachelor’s Degree in Creative Writing, and collects Asian Ball Joint Dolls who look like her characters. She has three cats who enjoy waking her up an hour before her alarm every morning and sitting on her lap to help her write. She can often be found at Anime Conventions masquerading as random characters when she’s not writing about boy romance.

Rafflecopter Prize: One winner of a print copy, and one winner with the name of their choice in the next Haven Investigations (model) book.
a Rafflecopter giveaway

One thought on “COVER REVEAL: Cardinal Sins by Lissa Kasey”