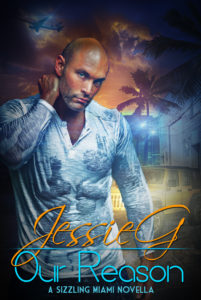 Married life is everything Bull and Red could have hoped for. It’s not something they’d ever take for granted and the need to pay it forward is a trait the husbands happily share. When the new director of the Bennett House asks Red to teach an art class, he isn’t entirely sure how it will help, but he’s more than willing to try. Before Bull, he used his art to purge his demons and sharing that with those in need of an outlet for their own pain was a gift he never considered giving. Each week he is rocked by the artful outpouring of emotion and the gratitude of his students. One by one, they burrow into his heart…but none more so than Dillon Young.

Always holding himself apart from the others, the wisp of a boy keeps his head down and hides behind a mangy, overgrown length of dark hair like a shield. Despite his best attempts not to see himself in all the young men that come through the center, everything about Dillon calls out to Red. Needing to share their encounters, and maybe hoping for a little perspective, he turns to the one man he knows he can always count on. Expecting Bull to be the voice of reason had been a fool’s mission from the start and soon they’re both invested in helping Dillon.

There’s no doubt they have an abundance of love to share and if ever there was someone who needed it, Dillon was the one. Between Bull’s strength and Red’s patience, they’ll help Dillon learn to trust again and in the process, create a family that none of them intended. Though they never envisioned themselves as parents, Bull and Red will find room in their happily ever after to save the child they didn’t know lived in their hearts.

Excerpt:
In his whole life, he’d never had someone force him to think about his own motives and he resented Alaric for making him question them now. “I get what you’re saying, Ric, but we both know there’s no way for me to answer. All I know for certain is that Dillon needs help. Ian said so, you and Davin have concurred, and the glimpse I got this morning only reinforced your opinions. That I’m standing here now because it’s affecting my husband doesn’t make my reasons any less about Dillon.”

Alaric looked confused for all of five seconds before he shook his head. “You misunderstand, my friend. I’m not doubting you, I’m warning you.”

“Warning me?” That didn’t make any sense unless… “You think I’m going to become attached?”

“Yes.” That simple word from someone he respected packed a hell of a punch. Alaric must have seen something in his expression because he stepped forward, his usually impassive face lined with worry. “This center is as much as I’m willing to share of my husband and there are days when I want to lock him away where they can’t have another minute of his attention. Maybe that’s selfish, but Davin’s just as possessive. The thing is, while you’re much nicer than we are about it, I know you’re equally protective of your relationship. I don’t want to see anyone get hurt—not you, and definitely not Red or Dillon. So, I have to ask, are you ready to share Red’s attention and is he willing to share the man who saved him?”

Whether it was attributed to past family issues or the years they were forced apart, it was no shock to hear Alaric unabashedly admit that they wouldn’t make room in their relationship…even for an innocent child. Once upon a time, Bull would have agreed, if only because Red deserved everything he had to give. Now? He didn’t know how to answer the question and wouldn’t try without talking to Red first.

Either way, Alaric was wrong about one thing and Bull hated the implication. “I didn’t save Ian. We saved each other.”

Just like everything else in this unexpected conversation, Alaric’s knowing grin seemed totally out of place and Bull didn’t know what to make of it. Whatever the cause, Alaric stepped back and walked around Davin’s desk to dig out a file from the top drawer, seemingly ready to share everything he knew.

The Zebra Coalition® is a network of organizations which provide services to lesbian, gay, bisexual, transgender and all youth (LGBT+) ages 13 – 24. The Coalition assists young people facing homelessness, bullying, isolation from their families, and physical, sexual and drug abuse with individualized programs to guide them to recovery and stability.

One way to be entered into the contests below is by donating at least $5 to the Zebra Coalition or buy something off their Amazon wish list (US Residents) or donate to an equivalent organization helping LGBT+ Youth in your country.