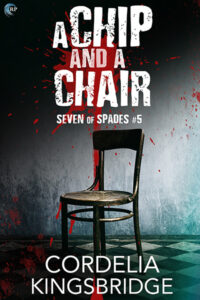 It’s time to lay all the cards on the table.

Detective Levi Abrams and PI Dominic Russo are reunited and more committed to each other than ever, but they can’t truly move forward with their lives until the serial killer who’s been tormenting them is behind bars. When a secret burial site is discovered in the desert with the remains of the Seven of Spades’s earliest victims, that goal finally seems within reach.
But just as the net is tightening, the neo-Nazi militia Utopia launches their master plan with a devastating act of terror that changes the landscape of Las Vegas forever. As Levi and Dominic scramble to prevent the city’s destruction, they’re opposed by treacherous forces that propel them toward catastrophe. In the end, Levi’s fate may rest in the hands of the very killer he’s been hunting.

The race to save Sin City is on, and these players are going for broke. No matter how hopeless things seem, as long as they’re together and they’ve got a chip to play and a chair to sit in, they’re still in the game.

About the Seven of Spades Series

Las Vegas has never seen a serial killer like the Seven of Spades.

The self-styled vigilante is on a mission to cut down the wicked and treacherous, and Sin City has no shortage of targets for their bloody wrath. What happens in Vegas . . . ends with the Seven of Spades’s calling card on a grisly corpse.

Standing against the killer are Levi Abrams, a dedicated homicide detective locked in a constant struggle to restrain his own dark side, and bounty hunter Dominic Russo, a charming rogue with a heavy secret weighing on his shoulders.

The hunt for the Seven of Spades sends Levi and Dominic on a collision course, igniting a passionate relationship forged in conflict and sealed with blood. Together they’re stronger than the sum of their parts, but a wily, elusive serial killer isn’t the only threat that will strain their bond to the breaking point.

Ante up, because the Seven of Spades is all in. Are you?

4✨s – Oh my God. I love this series. Everything heats up and comes to a head and I feel so many things.

Levi and Dominic are back together and stronger than ever. Which, after the way they broke my heart during the last book, that was good to see. Especially since they need to stay strong in order to defeat not only the Seven of Spades, but Utopia.

While I loved the book overall, there were some things that I had issue with. Namely the plot with Utopia. Personally, I would have liked to see that storyline end in a different book, before the storyline with the SoS was done.

I didn’t really like the way the SoS case was handled in this book. Not because it wasn’t good and I didn’t love it. But because I felt it was lacking in some places. The reveal was good. I was right from the beginning of the series on who the killer was, but I hate being right. It was devastating and I cried over what it did to Levi. How the way the killer was taken down, however, it wasn’t the way I ever thought it would go. That was nice because it takes a lot to surprise me and I was not expecting the way this book turned.

I loved the twists and turns, the danger, the way the characters banded together and took their lives back after the SoS tried to take them down. Levi and Dominic were tormented by the killer throughout the series and to finally have it end was such a relief, for the characters and the reader.

I hope we get a novella or short story or something because I think there’s more to Levi and Dominic’s HEA. I love where they left off, but I want more of them. I feel like their connection is strong and I would love to see more of the place they are in now after the dust settles.
Overall this was a great way to end an amazing series. I want to reread and discover all the clues I missed the first time around.

5✨s – I have never read a series where all the books were 5 star reads…until now. The author hooked me with Kill Game and didn’t let go. Through the twist and turns of the SoS mystery, the tumultuous relationship between Levi & Dominic, the side cases that made each book feel complete while adding to the overall picture the series was drawing, the growing cast of fully fleshed out side characters—many of whom doubled as suspects—and a whodunit that we all knew would be heartbreaking, this series had everything I could have wanted and more.

The revealing moment was this combination of ah-ha and oh-no and wait, I saw that 3 books back, but I didn’t want to believe… I know i’m not alone in writing this person’s name down on my list of would-be killers, scratching it off, writing it down again, all the while hoping against hope that I was wrong. But again, that could be said for many characters.

And I liked that the big reveal wasn’t the end in a neat little bow, and unlike my co-reviewer, I actually enjoyed the overlap with Utopia. The way they tried to pit themselves against SoS, only to be epically destroyed, because while SoS is unquestionably a serial killer, they are also a vigilante—a person who takes the law into their own hands because they see the justice system failing.

Throughout the series, SoS has targeted bad people who have gotten away with their crimes. They don’t see themselves in the same category, will never, and in the end, I didn’t either. In their very twisted view, they were helping Levi, but were unable to see how much they were hurting him. At the core, they were standing for justice, but were unable to understand how much damaging they were doing in the process.

They had an aha moment too and while it played out with typical SoS sensationalism, it was also a way to help Levi close the door faster. The alternative would have been a long drawn out public circus that very well could have destroyed our favorite cop. SoS knew this.

I also loved that it didn’t end there, but that we got to see some of the healing Levi did, the decisions he and Dominic made about their future, and to see them all get closure…and therein lies my one niggle. As I turned the pages of those last few chapters, devouring every word, I kept looking for a hint that this was not in fact over. That the SoS’s sensational end was really an elaborate ruse, thereby leaving the door open to revisit this world again. Because without that, this series is really over.

But I didn’t see it. Not even a tiny little bit. And I’m devastated.

Cordelia has solidified her spot on my auto-buy list and this series is one I will reread again and again.

About Cordelia Kingsbridge:
Cordelia Kingsbridge has a master’s degree in social work from the University of Pittsburgh, but quickly discovered that direct practice in the field was not for her. Having written novels as a hobby throughout graduate school, she decided to turn her focus to writing as a full-time career. Now she explores her fascination with human behavior, motivation, and psychopathology through fiction. Her weaknesses include opposites-attract pairings and snarky banter.

Away from her desk, Cordelia is a fitness fanatic, and can be found strength training, cycling, and practicing Krav Maga. She lives in South Florida but spends most of her time indoors with the air conditioning on full blast!

Where to find Cordelia Kingsbridge:

Contest:
To celebrate the release of A Chip and a Chair one lucky person will win a $10 Riptide Publishing gift card! Leave a comment with your contact info to enter the contest. Entries close at midnight, Eastern time, on March 16, 2019. Contest is NOT restricted to U.S. entries. Thanks for following along, and don’t forget to leave your contact info!

3 thoughts on “DUELING REVIEWS: A Chip and a Chair by Cordelia Kingsbridge”