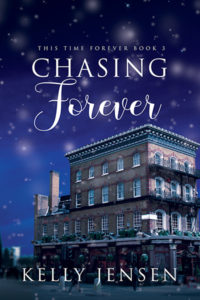 Old wounds, new directions, and a forever worth chasing.

Malcolm Montgomery was a history teacher and track coach until an accident left him with two broken legs. He’ll recover, but life has knocked his feet out twice now. He’s not sure if he’s ready to try again, especially when it comes to love—and slick guys like Brian Kenway. Still, he needs help mentoring the school’s LGBTQ society, so he asks Brian to take some responsibility.

Brian has been hiding behind his reputation as a liar and a cheat for so long that he actually believes he’s that guy—until his nephew, Josh, turns up on his couch, tossed out for being gay. Brian has never considered being a father, but he knows all about being rejected by loved ones. Now Brian wants to be more: a partner for Mal and a role model for Josh.

But when Mal’s recovery is set back and the sad truth of Brian’s past is revealed, the forever they’ve been chasing seems even further from their grasps. It’ll take a rescue effort to revive their sense of worth and make Brian, Mal, and Josh into a family of their own.

About the This Time Forever Series
Small towns and second chances.

Simon, Frank, and Brian think love has passed them by. Each is facing down his fiftieth birthday—Simon in a few years, Frank next year, and Brian soon enough. Each has loved and lost. But for these men, everything old really is new again, and it’s only when they return to their roots that they’ll find their second chances and the happily ever after they’ve been waiting their whole lives for.

4.5✨s – I truly enjoyed the first two books of this series but Brian’s story is my favorite of all. It’s got angst, heartbreak, joy, fully-drawn characters plus a setting enhanced by a sense of community. Brian was the cheating ex making Simon so reluctant to commit to Charlie in book one. It was impossible to see how he could be redeemed, yet the author has done it here and done it well. Brian’s personal growth is believably shown from the start. Brian initially panics when his nephew Josh turns up with nowhere else to go, and turning himself around, doing his best to give Josh a good home, went a long way towards his makeover. Mal has his own troubles; his severe injuries added to insecurities he already harbors makes him reluctant to hook up with the town Lothario. Once Brian and Mal are in close proximity around Josh and the GSA, they find themselves ready to reach for more from each other. Brian and Mal are the kind of characters I love best; mature, middle-aged men with damaged relationship skills but who know how to be adults when they’re supposed to be.

Slow burns are always the best and this one was paced perfectly, not too slow after building up just enough UST, and plot elements are all very balanced. An interesting sub-plot unfolds outside the romance, with plenty of side characters blended in, adding a rich backdrop to Brian and Mal’s actions.There are also appearances from others in the series with Simon being an important catalyst for Brian and Mal’s relationship development. Conflict between the lovers added to the tension of more than one crisis point. Brian ends up forced to face his past and Mal has to overcome his fears to keep them together. I did have niggles about some of the dialogue around Mal and Brian’s behavior towards each other, although I suppose it fit the characters as they are drawn. It’s quite a satisfying tale of redemption, self-forgiveness and acceptance and altogether a pleasure to read. #NetGalley #ChasingForever

5✨s – This is a first for me from Kelly Jensen. I now know this book is the third in a series but had no clue before reading it and it didn’t affect my enjoyment of the story or understanding of anything going on. Mal is struggling with his mobility, having to use crutches after being hit by a car. As he was very active before, he finds it very hard to cope with the limitations he currently has. Being the shy, quiet man he is, he figures Brian would never go for a guy like him. Brian feels something towards Mal, a man he wouldn’t normally try for. Both feel the attraction and connection but circumstances don’t always work in their favour. Mal’s physical ability is precarious, Brian’s nephew shows up after being kicked out, and Brian’s history is not something he wants to share with anyone. The two feel something but are not sure about moving forward. This was a really good read! There is drama, emotion, relationships built and actions taken that draw you into the story and become invested of not just the two MC’s but also some of the secondary characters as well, especially Josh, Brian’s nephew. The attraction between the two feels natural and their relationship evolves naturally, experiencing several stumbles both literally and figuratively, sometimes creating those problems themselves. Each man has endearing qualities making you love them just a little bit more. Mal’s stubbornness is both frustrating and admirable as he fights to get back his fitness and go back to work. Brian knows he’s good at business but not so much at his personal life so getting himself in a position to have a relationship with Mal and be a good caregiver for his nephew is interesting to read. He faces thoughts about himself and his past that he struggles with but at the same time open to what is on offer in his future. Kelly has created a wonderful world that these characters live in. There’s friendship and family support, though not equally on both sides. Mal’s connection with his twin is lovely to read, especially with what he’s done for his brother. Brian’s friendship with his best friend is what got him through his late teens and adult life so far, though she doesn’t necessarily always like him as written in the first chapter! We have lightheartedness mixed in with so much drama as well as a very worthy cause that both men fight hard to get. I definitely recommend this book and I’m going back to read the first two, which I’m sure are just as good as this one. I received an ARC and am happily giving a review

About Kelly Jensen:
If aliens ever do land on Earth, Kelly will not be prepared, despite having read over a hundred stories about the apocalypse. Still, she will pack her precious books into a box and carry them with her as she strives to survive. It’s what bibliophiles do.

Kelly is the author of a number of novels, novellas, and short stories, including the Chaos Station series, cowritten with Jenn Burke. Some of what she writes is speculative in nature, but mostly it’s just about a guy losing his socks and/or burning dinner. Because life isn’t all conquering aliens and mountain peaks. Sometimes finding a happy ever after is all the adventure we need.

Where to find Kelly Jensen:

Contest:
To celebrate the release of Chasing Forever one lucky person will win a $25 Riptide Publishing gift card and a swag pack of stickers, art cards, and bookmarks! Leave a comment with your contact info to enter the contest. Entries close at midnight, Eastern time, on December 15, 2018. Contest is NOT restricted to U.S. entries. Thanks for following along, and don’t forget to leave your contact info!