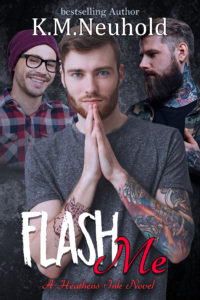 Liam
I was kicked out at sixteen for being transgender, but it turned out to be one of the best things to ever happen to me. At twenty-one, I have a fantastic new family made up of my brother and a handful of wonderful friends, I own my own photography business, and I’m happier than I imagined possible. There’s just one thing missing… Okay, maybe two…

Wyatt
When I took the position volunteering as a therapist at Rainbow House, I knew I’d found my place in the world: helping teens who had been rejected by their families. What I didn’t expect was the friendship I formed with Liam or how it would grow over the years into a crush I just couldn’t shake. I’m happy to see him finally opening himself up to dating with someone he trusts like Owen. But when he comes to me and asks if I can help his boyfriend, I feel like there’s more to the request than just a few therapy sessions. The more I get to know Owen, the more I like him, too.

Owen
I’m not sure why I believe so much in fate when she’s dealt me nothing but crappy hands—a stint in prison and enough childhood horrors to fuel all my adult nightmares. But I still hold on to the idea that everything happens for a reason. What I can’t figure out is why fate would plop me naked into Liam’s bed under the pretext of helping him with a photo series for a gallery showing. Or why my stomach goes funny every time he smiles at me. Liam is too sweet to be exposed to my demons, but I don’t know how to protect him…Maybe that’s why fate gave us Wyatt.

***This is the seventh book in the Heathens Ink series. Each book in the series CAN be read as a stand-alone, but characters do re-occur so it’s more fun to read them all!

My eyes greedily memorize the way Owen’s soaked shirt clings to his muscles. The colorful skin of his arms glisten under the fluorescent lights of the coffee shop, and the scent of his sweat tickles my nose. I can’t say I’ve ever found anything particularly sexy about a sweaty man. Sex sweat is fine, but not something that revved my engine. Consider me a convert, because it’s taking all my willpower to keep myself from flattening my body against Owen’s and drenching myself in his sweat, licking it off his neck, and rubbing against his slick body until sweat isn’t the only thing he’s drenched in.

Fuck, I’m such a bad person. His date with Liam was last night and here I am imagining humping him like an unneutered dog.

“Out for an early run?” I guess, looking down at his running shoes.

“Yeah,” he answers without any further elaboration.

I’ve known all the guys from Heathens Ink for years now but Owen is the only one I’ve hardly talked to, and I’m not sure why. Maybe because he’s always come off as more standoffish than the other guys? That doesn’t usually stop me with people, but I don’t have any other explanation. It feels like an oversight I should rectify. If Liam’s going to be dating him, I should get to know him better.

My stomach clenches, hot with jealousy knowing I was too late. Not that I was even too late, that I never had a shot with Liam to begin with. How can it hurt this much to know I can’t have him, when I only just realized I wanted him?

“How was your date with Liam?” I ask conversationally as the line inches slowly forward. Owen looks surprised by my question. “Liam and I are close,” I explain.

“Oh, yeah, I guess I should’ve realized. I’ve seen you two together a lot. It was great, Liam is…” Owen trails off, seeming to try to think of an adjective to describe Liam. I could help him out with that— Smart, funny, adorably shy at times, flirty and playful others, sexy, perfect.

“Yeah, he is,” I agree with his unfinished sentence, knowing he must be thinking the same things I am based on the smile tilting the corners of his lips.

4✨s – First, let me say that I have not read the other books in this series. I can say with certainty that this can be read as a standalone and you won’t be missing the plot of the story!!! One of the things that drew me to this book was not only the menage’ aspect of this relationship, but also the transgender element. I love a well told menage’ story and this one first the bill. It was enjoyable to read from each character’s point of view how the relationship was developing. I have also not read much transgender. I understand the basics of being transgender and was hoping to learn a bit reading this book. I feel the author did a very good job of explaining Liam to me – not to technical and not too glossed over – it was the perfect balance. Over all the book was good. Only drawback for me was writing style – I didn’t feel the book flowed very well overall. I felt the chapter breaks were forced.

5✨s – Flash Me is where we get Liam’s story, who we met way back when his brother, Royal got his men in Going Commando. We have Liam, Wyatt and Owen. Three different men with varying life experiences and history but come together with love, friendship and acceptance. Liam has grown into a successful business owner, sharing a flat with his best friend and a part of the most amazing family. But he’s missing his own love story. Wyatt works enough to cover his bills and a little extra but the rest of his time is spent at Rainbow House, working with the LGBTQIA+ young people that come looking for shelter and support. His friendship with Liam has grown since they met a couple of years ago, maybe a little more than he’s ready for, especially when Owen moves into the picture. Owen feels a darkness within. He escapes it through work, running and beating a punch bag with his friend Finn, the only one who fully knows Owens history. Yet, he can’t help but notice Liam…..and Wyatt. These three men work so very well together! We have light and dark, easy going and tense, lithe and muscled. Kyleen’s writing draws you in from the very start, especially if you’ve read the series and have been eagerly awaiting Liam’s story. When we met him as a 16 year old, he was just coming to terms with who he was and learning to accept himself as a man and the way in which he comes across through the story is totally endearing. Owen’s struggles are much darker than Liam’s but wanting Liam and being around Liam shows him the brighter side of life at the same time. When any setback is experienced, it’s great that he has someone to rely on and we get to hear from several men from previous books, all with their own experiences. Wyatt’s addition to the story and his skills as a psychologist but more so as a friend may have an even bigger impact. Wyatt is mostly happy with life expect for the loneliness he experiences. I love the commitment he has to Rainbow House. That comes through in a lot of what he does and says, as well as wanting a partner that understands what and why he does it. He’s quite an easy going guy but when someone he loves is hurt, damn does he spark to life! It’s a great change and quite a difference in the man. The way in which Kyleen has approached and written about Liam’s journey with being Trans, is wonderful. There is emotion, fear, acceptance, and being his first relationship, it’s very interesting to read the approach from all three men in the relationship. Taking things slow and at a pace that is necessary for Liam is huge and shows far more love and care than a lot of other actions or words. We get to spend an equal amount with each character’s POV throughout the book as we hear from each man once in a chapter. It’s great to read interactions with the other men from Heathens Ink and to get glimpses into how their lives are progressing! I have absolutely adored this series with each and every book offering up depth of character and story lines that grip you from the beginning. I’m a huge fan of Kyleen’s and look forward to her next book and hopefully another outing with these amazing men! I highly recommend this book and series. Whilst it’s not necessary to have read previous books in the series, I’d say that it would greatly enhance your enjoyment as previous characters pop into books throughout. I received an ARC from the publisher and am happily giving a review. 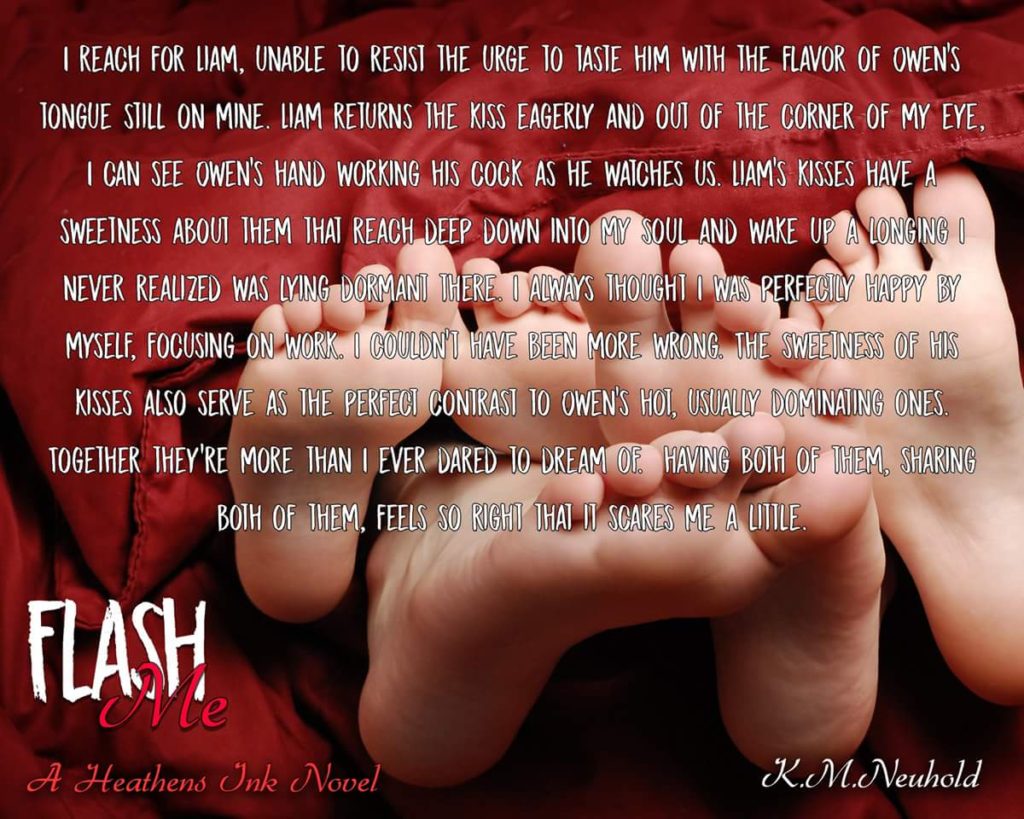 About K.M. Neuhold:
I’m an author of m/m and new adult romance. I have a strong passion for writing characters with a lot of heart and soul, and a bit of humor as well.

Where to find K.M. Neuhold: