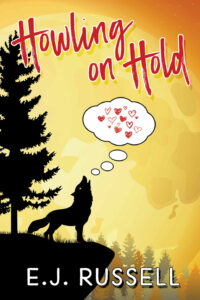 That’s why werewolves embark on a Howling: a three-year rite of passage in which they’re sent to a group residence to wrestle with their wolfy instincts and assimilate into the Wider World. But Tanner Araya’s Howling is almost over, and he could be called back to his remote pack at any moment. His twenty-first birthday might be his last chance to act on his strongest instinct and finally kiss Chase Denney.

Chase is RA at the Howling residence affectionately dubbed “the Doghouse,” and he takes his job seriously. So seriously that when he realized he was developing feelings for a resident, he forced himself to keep Tanner at a distance. But now that Tanner’s twenty-one, he’s not Chase’s charge any longer. They could be friends or—if Chase is lucky—something more. At least until they both return to their home packs for good, as tradition demands.

It would take a miracle for them to get together—especially when the other Doghouse werewolves insist on “helping.”

Humans will never know. They can’t know, or the lives of every supernatural creature on this world—or under it—would be at risk.

So the supes of every nation, culture, and pantheon joined together in uneasy alliance, vowing to keep their society secret in order to survive among humans.

But when you spend every moment hiding your true nature, how can you ever find true love?

4✨s by Jessie
I am a huge fan of the Supernatural Selection series. For me, every one of those books was a home run, so I was eager to read this and it didn’t disappoint. Chase and Tanner are adorable as they try to figure out how to go from RA / student to equals who could finally act on their attraction, especially amid the danger tracking Tanner’s coming of age and the role he’s supposed to step into. As the threat ramps up and the action unfolds, we get to revisit all our favorite couples from Supernatural Selection and see where they’re at, as well as become invested in a whole new cast of characters who are starting to come into their own. My only complaint and it really is just my desire for ‘more, more, more’ was I wanted to see something in the three months Chase was banished from the Doghouse.

4✨s by Xanthe
Howling on hold is a wonderful coming of age, supernatural, action romance with a host of great characters, several known from the Supernatural Selection series.

Tanner is coming of age as his Howling nears its end. This is where young wolves go to a residence to learn to, basically, hide from humans. At 21, he’s graduating and will be able to go back to his pack at the end of the school year. His crush on Chase, his RA, will carry on forever even though he’s never made a move and romance between students and staff is prohibited. At least until they are of age. Chase has definitely noticed Tanner, ever since he arrived, but he’s refused to act on it as it would compromise his position. A series of events, however, lead to them spending three months apart with a lot of thinking done on both sides.

There is a lot more that goes on in this story than the blurb suggests and it gets really interesting! Family drama, relationships both old and new, misunderstandings, and a few mysteries to solve. Chase and Tanner are instantly likable characters. Tanner is struggling with not wanting to return to his pack, enjoying being in the Wider World and learning all he can. Chase is a great RA, really caring about the people he’s in charge of, taking their welfare and his responsibilities seriously. The group of students at “The Doghouse” are such fun to read, especially Jordan who is new to his Howling and finding it harder than most to act less like a wolf. I loved getting to hear from several of the cast from the Supernatural Selections series. Because of the turn that the story takes, help is needed to search for someone and many become involved in that and what follows as danger rises up to meet them and the safety of Tanner and Chase becomes paramount.

I loved the couple and the plot of the story that Howling on Hold gives the readers. I was engaged right from the start and enjoyed it all the way through. Definitely another recommended read from E.J. Russell and I’m hoping we get to hear more from these characters again in the future.

About the E.J. Russell
E.J. Russell holds a BA and an MFA in theater, so naturally she’s spent the last three decades as a financial manager, database designer, and business-intelligence consultant. After her twin sons left for college and she no longer spent half her waking hours ferrying them to dance class, she returned to her childhood love of writing fiction. Now she wonders why she ever thought an empty nest meant leisure.

E.J. lives in rural Oregon with her curmudgeonly husband, the only man on the planet who cares less about sports than she does. She enjoys visits from her wonderful adult children, and indulges in good books, red wine, and the occasional hyperbole.

2 thoughts on “Dueling Reviews: Howling on Hold by E.J. Russell”