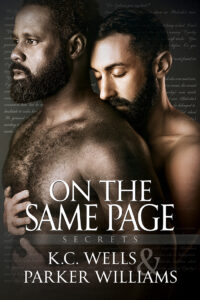 When a Dom invites a shy bookstore owner to live out his fantasies, more than one life will be transformed.

Words are Heath Snow’s life. He can’t remember a time when he didn’t have his nose buried in a book. He couldn’t make a living as a writer, so he did the next best thing—he bought a bookstore. But when he’s not selling books, he’s living vicariously through the characters he encounters. Real men can’t hold a candle to the hot men in his favorite genre.

Xavier is about to learn that some things are more important than work, and Heath is about to step out of his comfort zone, into a place where fantasy and real life coexist.

Heath is the bookstore owner and Xavier initially starts out as a bookstore customer. Sparks fly!! They are so very drawn to each other and watching these two find their way is a rollercoaster of emotions!! Without giving away spoilers, this book is my favorite one of the series (so far!!).

4.5✨s by Xanthe
Secrets is an amazing series from two authors who write wonderfully together. On The Same Page is yet another example of their strength in writing plots and characters that draw the reader in and are entertaining throughout.

I loved getting to hear from previous characters and those in the Sub Club are so supportive and welcoming to Heath, which he finds himself much in need of at one point in the story. Xavier doesn’t always make the best choices but he can’t fail when it comes to Heath, they are like a perfect match. Luckily he has a best friend to kick him in the right direction.

Heath’s bookshop is a part of a great community that suddenly finds itself in danger of being sold off and moved out. Everyone pulls together, just like they do at Secrets. There are a couple of lessons about gentrification and the impact it has on the people in the area. It was interesting as we get to read a little bit from both sides of the argument.

On The Same Page is a great addition to the Secrets series and, though it could be read as a stand-alone, I’d recommend reading in order as the characters added in each book builds up the Secrets community. I would say, compared to others, this is a lighter story but there is still a fair amount of drama that Heath and Xavier go through to get to their HEA.

About the K.C. Wells
I’ve always written, right from an early age. I was always writing stories as a child, and as I grew up, I had the idea of writing a novel, like so many people do. Born and raised in the north-west of England, K.C. Wells always loved writing. Words were important. Full stop. However, when childhood gave way to adulthood, the writing ceased, as life got in the way. K.C. discovered erotic fiction in 2009, where the purchase of a ménage storyline led to the startling discovery that reading about men in love was damn hot. In 2012, arriving at a really low point in life led to the desperate need to do something creative. An even bigger discovery waited in the wings—writing about men in love was even hotter…. K.C. now writes full time and is loving every minute of her new career. The laptop still has no idea of what hit it… it only knows that it wants a rest, please. And it now has to get used to the idea that where K.C goes, it goes.

About the Parker Williams
Parker Williams began to write as a teen, but never showed his work to anyone. As he grew older, he drifted away from writing, but his love of the written word moved him to reading. A chance encounter with an author changed the course of his life as she encouraged him to never give up on a dream. With the help of some amazing friends, he rediscovered the joy of writing, thanks to a community of writers who have become his family. Parker firmly believes in love, but is also of the opinion that anything worth having requires work and sacrifice (plus a little hurt and angst, too). The course of love is never a smooth one, and Happily Ever After always has a price tag.