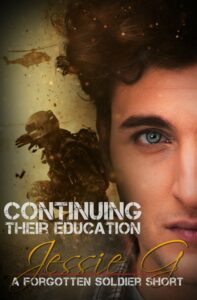 As a professor of Forensic Anthropology at a prestigious university, Clark Abrams loved being able to pass on his extensive knowledge of criminal justice while continuing his work as a cold case consultant. When close friends complain that he’s married to his career, he’s happy to agree. Sex was fun and all, but a relationship would take precious time away from doing what he loved and, really, who needed the drama?

Decorated Veteran Brent Covington spent twenty years serving his country, and he refuses to let retirement slow him down now. He needs to be active and an ongoing part of the solution, even if it isn’t on the front lines. It would be a change, but he was looking forward to the perks of civilian life. As a soldier, he hadn’t wanted to leave anyone behind and now that it wasn’t an issue; he was open to finding more than his next career.

When Clark is asked to teach a course to retired servicemen, he isn’t expecting the hot-as-hell airman to flirt with him but then, Brent wasn’t expecting the highly sought-after professor to be cute as a damn button. And while Brent knows that the quirky professor has a lot to teach him, he has a few pleasurable lessons of his own to share.

Now he’s got six weeks to convince Clark that continuing their education together just might be their most important mission yet.

Note: This short story was part of a summer giveaway and their story will continue in the series. To get your copy for free, enter 0 in the ‘Suggested Price’ at the link below.