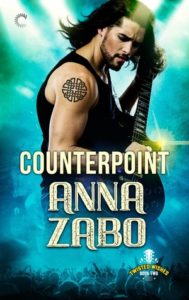 Twisted Wishes lead guitarist Dominic “Domino” Bradley is an animal onstage. But behind his tight leather pants and skull-crusher boots lies a different man entirely, one who needs his stage persona not only to perform, but to have the anonymity he craves. A self-imposed exile makes it impossible to get close to anyone outside the band, so he’s forced to get his sexual fix through a few hot nights with a stranger.

When computer programmer Adrian Doran meets Dominic, he’s drawn to the other man’s quiet voice and shy smile. But after a few dirty, demanding nights exploring Dominic’s need to be dominated, Adrian wants more than a casual distraction. He has no idea he’s fallen for Domino Grinder—the outlandish, larger-than-life rock god.

Dominic is reluctant to trust Adrian with his true identity. But when the truth is revealed prematurely, Dominic is forced to reevaluate both his need for Adrian and everything he believes about himself.

Click to read excerpt
When Dominic had suggested going to the Met this weekend, Adrian’d been a little disappointed, since he wanted more than just looking at art. He’d wanted a glimpse behind some of those walls Dominic threw up.

Then Dominic had said the magic words: “There’s a tour today where they’re bringing out some of the stringed instruments for a demo, including a seventeenth century guitar.” His eyes had shone with excitement and delight. “I’ve heard recordings—there’s even stuff on the website—but to experience that in person?”

Adrian recognized the shiver of delight, and that had cinched it. He could touch Dominic like that—he wanted to know what else did. And this was music-related, something Dominic tended to push away.

As it happened, the galleries that housed the Met’s musical instrument collection had apparently been undergoing some major renovations over the last couple of years and they were finally in the process of being reopened. As part of that, there’d been some special tours, including performances with instruments from their extensive collection.

Normally, this was the type of thing Adrian would have passed up—tours were tourist traps or designed for school groups—but the way Dominic’s face lit up each time he thought of hearing some instrument from a couple hundred years ago played live…

Yes, he’d seen Dominic in the throes of passion, but that didn’t nearly measure up to the intense need in every fiber of Dominic’s frame. The man was a musician, indeed. He might not talk about his career or his band for whatever reason, but this—this Dominic was willing to share, so Adrian followed, and gladly.

He also adored the feel of Dominic’s hand in his and how utterly unashamed Dominic was to hold his. For someone who could be so shy at times, Dominic was utterly free about expressing his sexuality. Though sometimes, when he looked at Adrian, there was still that haunting sadness or worry. Less and less, though.

And Adrian was grateful for that. He’d rather have Dominic’s smiles and sexy little glances, and not have to worry about whether this was a very long casual thing. Plus, he wanted more, too. More throaty cries, more cuffs and rope, more lazy talks after sex, more of Dominic paging through books and snuggling next to him to read poetry.

As they walked through the Met’s Great Hall, Adrian had that quickening of breath he got whenever he visited a museum. This one topped his list. The Met had art and history—and he was here holding the hand of Dominic Bradley, with his flushed cheeks and a smile Adrian wanted to kiss forever.

This moment, right here, was giddy and full. The seed of deep love. Tantalizing. But calm and sweet. It took everything Adrian had not to get his hopes up yet.

They’d seen each other every weekend since that first one, and a few weeknights, too. More and more, Adrian learned about Dominic, and his childhood in New Jersey. He’d gotten a degree in history with a minor in music from Montclair State University, which explained his familiarity with New York City.

In return, Adrian shared pieces of his own life, beyond the tangled mess of his return to New York. Pieces of his childhood in Brooklyn. His parents’ reaction to his interest in more than just women. His running with his neighborhood crew until college in Buffalo. How hard it’d been to move to a place where he’d needed to learn to drive and own a car. And hadn’t that blown Dominic’s mind, that Adrian hadn’t bothered to get his license until well after he turned eighteen.
Being at the university had also been less diverse in many ways.

Adrian glanced around as they stood in line to get entrance tickets. Not so true here. Many different skin tones. So many languages. Sure, some were tourists, but not everyone. It felt more like home than anywhere else had. And people had the gall to say New Yorkers lived in a bubble?

“Are you staying?” The question came unbidden to Adrian’s lips. “Here in New York? For good?”

There was a hint of confusion in Dominic’s face as he replied, “Yeah. I bought a house here. I mean, I’m gonna travel some.” He got that faraway look again. “Sometimes the band—” He shrugged, and the brilliant smile returned. “This is my home. I love it here.”

That was one of the other things Dominic never touched on—how a guitarist for this band he was in could afford to buy a place in Brooklyn. But Adrian let the thought slide away. Dominic would tell him in time, would open those doors to whatever it was he wasn’t sharing. After all, Adrian had said that was fine, that some secrets could be kept.

4.5✨s – This was a fantastic book! I did not read book 1 in this series but will remedy that soon (it did not take away from this book by missing it). Dom is a complicated man who has reasons for his different personas. Watching his quiet side flourish with Adrian made my heart sing! An Adrian – holy hotness. Predictably, Dom’s two worlds collide leaving both him and Adrian adrift. Watching them work their way back to each other and how they navigate the future is wonderful.

Dominic’s fears are deep-rooted and his secrecy becomes a major obstacle to the future of the relationship when Adrian discovers his deception. Naturally Zavier, Ray and Misha are on hand to offer support and advice for Dominic and Adrian has his own friends who add interest to the narrative. His friend and coworker Jackson has a strong role and later he discovers friend and kink-advisor Janelle has a tenuous connection to Zavier. (I’d love to see a story for Jackson in the future, although he has a boyfriend in this story and seems quite vanilla.) Adrian also has to contend with problem coworkers and dissatisfaction with his job, all of which adds texture and dimension to this fresh take on a secret identity trope. This could be read as a stand-alone fairly easily I think but I hope you don’t deprive yourself of Ray and Zavier’s story! I recommend this one quite highly. 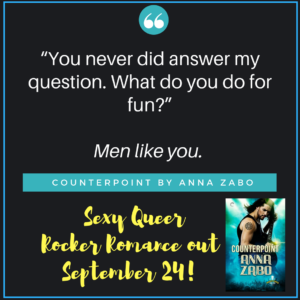 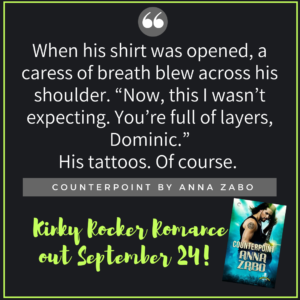 5✨s – What a fantastic story! A book full of depth, happiness, woe, and hot hot scenes with incredible kink! Dominic Bradley aka Domino Grinder is living the high life as a rock god with his best friend and bandmates as a part of world famous band Twisted Wishes, but also enjoying his anonymity as the book nerd he also is. Adrian Doran is a computer programmer fed up of one night stands and finds himself drawn to Dominic when he sees him sat read in a restaurant. Both men feel an instant connection to the other but Dominic is very reluctant to trust his secret famous side to Adrian, at least until he knows him better. But more time together leads to both men falling more for each other, as well as exploring more of their d/s sides. Damn this is a hot read. The way each man expresses themselves from their POV when they’re together is intense and makes you feel how much they’re into what they are doing. Dominic is extremely worried about the two halves of himself being able to exist together. As Dominic, he’d never be able to perform on stage in front of thousands but Domino gives him the freedom to be loud, brass and play his music to the world. He’s a wonderfully sensitive guy very worried about acceptance from those around him and trust is the hardest thing he finds to give. His family is the band and the only people he trusts, especially after what happened to them in book 1 of the series. Adrian is settled in his life now after moving back from California. He’s got his own issues with family, unfulfilled with the job and one night encounters. He’s a strong guy mentally and emotionally after having to fight against family and things going a little awry at work at the moment. His support from his closest friend, Jackson is important to him. The MC’s are amazing together, you can instantly tell the attraction and the building emotions between the two. As well as the time they spent wrapped in each other at Adrian’s home, they take a few trips around the city which Anna is brilliant at describing and painting the setting of where they go so you feel right there as they come closer together. The overall storyline is easy to read and draws you to the characters, actions and emotions well written and I was eager to read the next chapter and the next, and then next until I finished at great book! This is the second in the Twisted Wishes series but can be read as a stand-alone. I haven’t read the first but will definitely be going back to it! I didn’t feel lost at any point with enough detail from the previous book given to easily understand. I highly recommend this book, think it’s one that many would enjoy even if you don’t normally read a BDSM story. I received an ARC from the publisher and am happily giving a review

Anna Zabo writes contemporary and paranormal romance for all colors of the rainbow. They live and work in Pittsburgh, Pennsylvania, which isn’t nearly as boring as most people think.
Anna grew up in the wilds of suburban Philadelphia before returning to their ancestral homelands in Western Pennsylvania. As a child they were heartily disappointed to discover that they couldn’t grow up to be what they wanted (a boy, a cat, a dragon), so they settled on being themself whenever possible, which may be a combination of a boy, a cat, and a dragon. Or perhaps a girl, a knight, and a writer. Depends on whom you ask. They do have a penchant for colorful ties and may be hording a small collection of cufflinks.They can be easily plied with coffee.

Anna has an MFA in Writing Popular Fiction from Seton Hill University, where they fell in with a roving band of romance writers and never looked back. They also have a BA in Creative Writing from Carnegie Mellon University.

Where to find Anna Zabo: