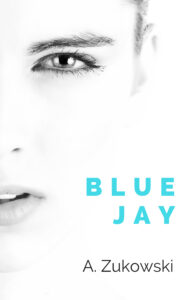 Blurb:
Boxing was all Alex had ever known, his entire being now shattered beyond repair. One night and four years in jail changed everything. These days, Alex prefers the shadows and dreams of nightmares. Will he find rainbows and glitters in the run-down flat he’s moving into?

Chris has been selling their looks and body for too long. It may be time for a life change, but one thing is clear. The fairest of them all will make a lousy lover until they stop acting the smart-mouthed and blasé cynic. Their story begins with an elegant tango up the narrow stairwell…

A match made in London.

Featuring Chris from Liam for Hire, Blue Jay is a hopeful and romantic story with genderqueer and bisexual characters.

Excerpt
Chris’s clever comeback hangs in the air as ‘Girls/Girls/Boys’ blasts out of the monitors. “Oh, my gosh. I love this song!” Chris screams. “We’ve got to dance.”

Alex glares at her. “You’re fucking kidding me.”

“Yeah? You do now.” Chris tugs the big man along. “You performed in front of millions, Alex. Are you scared of these people? In the dark?”

Alex slips down from his stool. “One fucking song,” he says.

They dance along to the tune. The singer is pleading to another to change their mind and find him. Surprising himself, the boy abandons the girl for another boy.

Lost in the heady scent of body heat and sweat, they move with the rhythm. Being so close to Alex makes Chris all tingly and hot. Alex’s body under the tight dress shirt does wonderful things—unfamiliar and tender things—to Chris’s insides.

Chris dances like a pro, gyrating to the song, lost in the intoxicating scent of Alex. The other revellers ogle her and by default they take in Alex. Chris closes her eyes and grins. When she opens her eyes again, she is gazing at something close to magic. She throws her arms around Alex’s neck and makes him swing along with her.

Alex is not a practised dancer, but heat radiates from his body as they rub against each other on the dance floor.

About the A. Zukowksi
I am a London-based British writer who grew up in the gay village and red light district of Manchester, UK. I was trained in screenwriting at the University of the Arts, London; National Film & Television School and Script Factory, UK, followed by a series of misadventures as a film journalist, writer and producer of short films. My stories are based on personal and emotional experiences, and feature strong LGBTQ-identified characters.