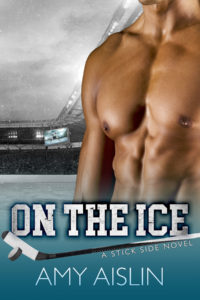 For college sophomore Mitch Greyson, determination and persistence are the name of the game if he wants to make it as a professional hockey player. A busy schedule of practices, games, classes, homework, two part-time jobs—and now, working with a tutor to help him pass the class he’s failing so that he can keep his scholarship—shouldn’t leave him with enough time to flirt with the NHL player in town. But that doesn’t stop him.

Placed on the injured reserve list until his broken arm heals, NHL defenseman Alex Dean is using the time off to be with his ailing grandfather and get a head start on the book he’s been commissioned to write. He doesn’t expect to get roped into a tutoring gig, especially not for cocky, smart-ass Mitch.

But Alex soon discovers that there’s more to Mitch than meets the eye…and he really likes what he sees. Only Alex doesn’t dare risk his NHL career by coming out, and a relationship between them would jeopardize Mitch’s chances with the organization too.

It looks impossible. Then again, the best things usually do…

Excerpt:
The nine-to-five stint on Sundays was Mitch’s only shift at the long-term care facility in Montpelier, and since it was about as interesting as reading the phone book, he inevitably left the place every weekend tired and grumpy. Combined with the head-banging math tutoring session with his freshmen this morning, he was ready for dinner and a nap—not necessarily in that order—before hunkering down with the reading for tomorrow’s biomechanics lecture.

Finding a dejected pro hockey player in the facility’s parking lot wasn’t part of his evening plans, but Mitch didn’t mind, especially when that hockey player was Alex Dean. Mitch’s heart leapt, and then crashed when Alex’s slumped shoulders registered.

Alex sat on the trunk of his car, his feet on the bumper, elbows on his knees, with one hand buried in his hair. He stared at the ground and was so lost in thought, he didn’t react when Mitch stopped in front of him and cleared his throat. Mitch shifted on his feet and cleared his throat again. He wanted to reach out and run his fingers through Alex’s beard, but resisted the urge. Alex would probably slap his hands away.

Bending at the knees, Mitch peered up at Alex’s face until he caught Alex’s eyes. 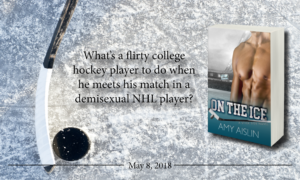 “Jesus!” Alex jerked up, hand on his chest. “Where the fuck did you come from?”

A witty reply was on the tip of Mitch’s tongue, but he resisted that urge too. He jerked a thumb over his shoulder. “I work here.”

“It’s about as much fun as my creative writing class.”

Alex laughed, and Mitch mentally patted himself on the back for putting a little bit of light back into his friend’s dark eyes.

“What are you doing here?” Mitch said.

Alex lost his smile, and his shoulders slumped further, if that was possible. “I was here to visit someone, but the nurses said he’s not having a good day and I should come back tomorrow.”

Questions raced through Mitch’s head. Who are you visiting? How long’ve they been here? What does ‘not a good day’ mean? How long have you been sitting here?

Can I touch your beard?

Mitch shook his head to scatter his wayward thoughts. Dropping his backpack next to the car, he hopped up to sit on the trunk next to Alex. “What are you up to now, then?”

Alex shrugged those massive shoulders and squinted against the setting sun. “Dunno. I was going to go home, but…”

Mitch waited, but Alex never finished his sentence. Instead, he stared off into space, unmoving, looking so hopeless that Mitch had to bank the desire to reach out and put his arm around him.

They sat quietly for a few minutes, breathing in the chilly evening air. Mitch shivered in his long-sleeved T-shirt, but didn’t get up to fish the hoodie out of his backpack, afraid any sudden movements would ruin the comfortable silence they’d settled into.

The facility was built on the outskirts of Montpelier, nestled between a hill with trees that were slowly losing their leaves to winter, and a stretch of flat land that led downtown. Away from the relative hustle and bustle of State and Main Streets, it was peaceful and still, and it smelled like wet grass. Mitch felt the stress that was a constant weight on his shoulders release.

Alex turned to him with narrowed eyes. After a few seconds of yet more silence, Mitch looked down at himself, but didn’t note any stains. Was Alex looking at something behind him? Mitch turned to check, making Alex laugh.

Alex shook his head, lips quirked. “Nothing. I’m hungry. Let’s get dinner in town.” He hopped off the trunk, making Mitch bounce in place as the car adjusted to the sudden loss of over two hundred pounds, and headed for the driver’s side door.

“Actually,” Mitch said. “I have a better idea.”

About Amy Aislin:
Amy started writing on a rainy day in fourth grade when her class was forced to stay inside for recess. Tales of adventures with her classmates quickly morphed into tales of adventures with the characters in her head. Based in the suburbs of Toronto, Amy is a marketer/fundraiser at a large environmental non-profit in Toronto by day, and a writer by night. Book enthusiast, animal lover and (very) amateur photographer, her interests are many and varied, including travelling, astronomy, ecology, and baking. She binge watches too much anime, and loves musical theater, Julie Andrews, the Backstreet Boys, and her hometown of Oakville, Ontario.

Where to find Amy Aislin: