Jodi: Refraction is a fish out of water story that takes Tucker, a hot and haunted Texas artist, and drops him in New York City in the snow. There he meets Calvin, a beautiful but insecure underwear model. The two of them couldn’t culturally be more disparate, but emotionally (and physically, like whoa) they prove to be the piece the other one has been missing. Their relationship is an intense journey, sometimes achingly raw and sometimes so sweet.

We did a little interview (after the excerpt) for you about our writing and answered some fun questions at the end too. 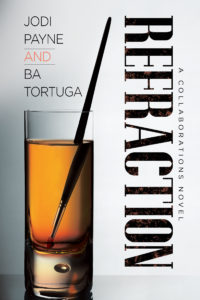 Unable to deny a new inspiration, Tucker sublets a studio and finds the city’s energy almost as addictive as Calvin.

Tucker is obsessive, barely holding on to sanity as his art consumes him, and Calvin is dealing with demons of his own, trying desperately to protect his soul in a business where only his appearance has value. They each prove to be the perfect remedy for the other’s personal brand of crazy until, in the midst of stress and exhaustion, they discover that a promise Calvin needs is the one thing Tucker can’t give him, and their heaven turns to purgatory.

Can both men find a path toward wholeness in Tucker’s beautiful but chaotic Texas home? In order for them—and their passionate relationship—to thrive, they’ll need to adapt, share their psychoses, and find a true balance between New York City and rural Texas.

Excerpt:
Tucker Williams leaned against the steps of the library beside the big stone lion and watched the white stuff fall out of the sky. Colder than he’d ever been in his whole life, he shivered, trying to figure out what the fuck a guy like him was doing all the way up here.

The logical part of his brain, the part not frozen solid, reminded him that he had a gallery opening tomorrow. A major opening. Right.

So he was up here touristing all by himself and freezing his nuts and his toes off and waiting to show up in his best jeans and jacket tomorrow night.

Christ on a sparkly pink crutch, everyone here wore black, and no one smiled a bit. Surely there had to be somewhere here with friendly folks and heat.

Right on cue, one of those black-clad Yankees—this one in a black knee-length coat, black earmuffs, and chunky black boots—came trotting down the steps right past him. Like every other guy on the busy street, he was on the phone.

“That spread is mine, Michael. I want it. You make it happen. I’ve got the best ass of the bunch, and you know it.”

The man stopped two steps below Tucker. “I’m easier to work with too. You tell them, okay? I need to get out of the weather. Who ordered this shit? Later.”

Huh. Earmuffs were a thing. Go figure. Tucker had to admit, the whole pseudo-duster thing was pretty hot.

“’Scuse me, sir, but is there a decent place to get a cup of joe around here?” Tucker asked.

The guy turned his head, but Tucker couldn’t get a good look at him behind the collar he’d pulled up against the weather. He was squinting against the snow, and his hair was mostly hidden under a knit hat, but it looked like it might be blond.

“There’s no such thing as a bad cup of coffee in New York. You look like you’re freezing your ass off, man. Come on, I’ll show you.” The guy just took off down the steps, and Tucker didn’t have much choice but to follow.

“Calvin.” He was offered a gloved hand. Black leather, of course.

“Williams. Tucker Williams. Pleased.” He pulled his hand out of his pocket and shook.

“Not from around here, I take it?” Calvin gave him wink and a grin.

“I’ll say. In here.” Calvin opened a door, and Tucker was hit with the smell of baking bread and a beautiful blast of warm air.

About Jodi Payne:
Jodi Payne takes herself way too seriously and has been known to randomly break out in song. Her men are imperfect but genuine, stubborn but likable, often kinky, and frequently their own worst enemies. They are characters you can’t help but fall in love with while they stumble along the path to their happily ever after. For those looking to get on her good side, Jodi’s addictions include nonfat lattes, Malbec and tequila any way you pour it.

Where to find Jodi Payne: 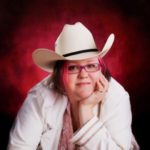 Texan to the bone and an unrepentant Daddy’s Girl, BA Tortuga spends her days with her basset hounds and her beloved wife, texting her sisters, and eating Mexican food. When she’s not doing that, she’s writing. She spends her days off watching rodeo, knitting and surfing Pinterest in the name of research. BA’s personal saviors include her wife, Julia Talbot, her best friend, Sean Michael, and coffee. Lots of coffee. Really good coffee.

Having written everything from fist-fighting rednecks to hard-core cowboys to werewolves, BA does her damnedest to tell the stories of her heart, which was raised in Northeast Texas, but has heard the call of the high desert and lives in the Sandias. With books ranging from hard-hitting GLBT romance, to fiery menages, to the most traditional of love stories, BA refuses to be pigeon-holed by anyone but the voices in her head.

Where to find BA Tortuga: