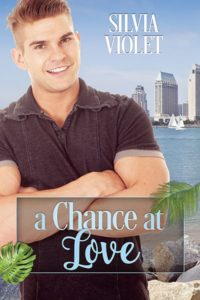 On the flight back home to San Diego, Chance Emerson meets an intriguing older man. They flirt, and Chance hopes for more, but the man never calls. Months later, they meet again at a charity auction. Chance decides this time he isn’t walking away.

Darren Walsh can’t stop thinking about the gorgeous grad student who almost had him joining the mile-high club. When Chance suggests they hook up, Darren says the only thing he can—yes.

From their first moments together, Chance and Darren know there’s more between them than lust, but their differences in age and income make a real relationship challenging. They decide to keep things secret, yet as they learn more about each other, Darren realizes he wants something real and open. To have that, he’ll need to convince Chance that he has a place in Darren’s world, and Darren will have to take some risks of his own.

Excerpt:
Chance touched Darren’s arm again, and Darren felt an honest-to-God jolt of electricity zip through him. “Thank you for distracting me.”

Their gazes met, and Chance licked his lips, a provocative move that made Darren wonder if he really wanted to say goodbye.

“Are you getting a cab or something?” Darren asked. Was he really going to ask Chance to share a ride with him?

Chance shook his head. “A friend is picking me up.”

“Right. That’s easier, I guess.” Darren hated how disappointed he was.

“But…” Chance pulled something from the outer pocket of his bag. “Here’s my card. Give me a call if you want to play cards again or just talk or…something else.”

Darren took the card. Was it already warm from Chance’s touch, or was that his imagination?
Chance didn’t seem like the type to carry business cards around. He glanced down at it and realized the front was simply an artistic rendering of a DNA double helix. He flipped it over and saw Chance’s number and his email.

When he looked back up, Chance had a wary look on his face. “No pressure or anything if you don’t—”

The plane hit the tarmac then, jolting them. Darren hadn’t realized they were so close to the ground.

“I gotta text my friend,” Chance said, pulling out his phone.

Darren forced himself to focus on arranging a Lyft for himself rather than staring at Chance. By the time he finished, they were pulling up to the gate. Darren tucked Chance’s card into his leather iPad case and then slipped the device in the pocket of his briefcase.

For the first time since Darren had been startled by the young man holding a giant container of cheese balls, an awkward silence fell between them. He considered assuring Chance he’d call just to make him feel better, but he’d be lying.

He’d be tempted to, especially on nights when he was lonely. Going out or using an app to find a hookup often seemed like far too much trouble. But if he saw Chance again, it wouldn’t be the same. In the real world, Darren and this exuberant, young grad student had nothing in common.

Are you sure? You talked to him more easily than with anyone else you’ve encountered in months, maybe years.

5✨s – Oh, where to begin…… In my opinion, the blurb doesn’t do the book justice. It is so much more … more plot, more characters, more FEELINGS!!!! First, I think I need to discuss FEELINGS!!! Holy macaroni, soooooooo many feelings from this book. You all know me and how much I need them. Silvia didn’t disappoint. Next, let’s talk about Darren and Chance. Their chemistry is off the charts – I actually had to fan myself several times. Both guys exhibit some self esteem issues. It was truly awesome how she worked out those issues!! And Roger – everyone needs a Roger. Loved the book!! 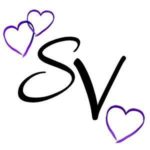 Silvia Violet writes erotic romance in a variety of genres including paranormal, contemporary, and historical. She can be found haunting coffee shops looking for the darkest, strongest cup of coffee she can find. Once equipped with the needed fuel, she can happily sit for hours pounding away at her laptop. Silvia typically leaves home disguised as a suburban stay-at-home-mom, and other coffee shop patrons tend to ask her hilarious questions like “Do you write children’s books?” She loves watching the looks on their faces when they learn what she’s actually up to. When not writing, Silvia enjoys baking sinfully delicious treats, exploring new styles of cooking, and reading to her incorrigible offspring.

Where to find Silvia Violet: