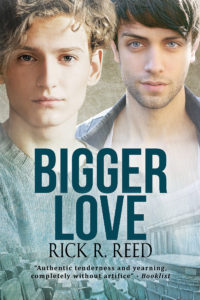 Truman Reid is Summitville High’s most out-and-proud senior. He can’t wait to take his fierce, uncompromising self away from his small Ohio River hometown, where he’s suffered more than his share of bullying. He’s looking forward to bright lights and a big city. Maybe he’ll be the first gender-fluid star to ever win an Academy Award. But all that changes on the first day of school when he locks eyes with the most gorgeous hunk he’s ever seen.

Mike Stewart, big, dark-haired, and with the most amazing blue eyes, is new to town. He’s quiet, manly, and has the sexy air of a lost soul. It’s almost love at first sight for Truman. He thinks that love could deepen when Mike becomes part of the stage crew for Harvey, the senior class play Truman’s directing. But is Mike even gay? And how will it work when Truman’s mother is falling for Mike’s dad?

Plus Truman, never the norm, makes a daring and controversial choice for the production that has the whole town up in arms.

See how it all plays out on a stage of love, laughter, tears, and sticking up for one’s essential self.

4✨s – This was a cute book. Truman and Mike were so different from each other. Truman is light, bright, and dances to his own beat. Mike is quiet and not closed off but he doesn’t put himself out there like Truman does.

While Truman is a bit dramatic, he’s not too over the top. He knows who he is and what he wants, getting it is the problem. Their forced proximity from both working together to learning their parents are dating makes things a little tentative between them, but it works. Both Mike and Truman bring something to the table that helps balance the other out.

This was a quick read, but it took me a little while to get into the writing style. It’s starts out kind of stilted and the narration took a minute to get used to. Other than that it was a fun read about learning, love, and coming into yourself. 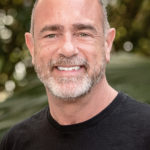 Rick R. Reed is all about exploring the romantic entanglements of gay men in contemporary, realistic settings. While his stories often contain elements of suspense, mystery and the paranormal, his focus ultimately returns to the power of love. He is the author of dozens of published novels, novellas, and short stories. He is a three-time EPIC eBook Award winner (for Caregiver, Orientation and The Blue Moon Cafe). He is also a Rainbow Award Winner for both Caregiver and Raining Men. Lambda Literary Review has called him, “a writer that doesn’t disappoint.” Rick lives in Seattle with his husband and a very spoiled Boston terrier. He is forever “at work on another novel.”

Where to find Rick R. Reed: