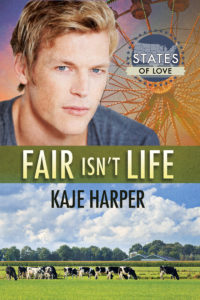 Luke Lafontaine survived the past year by not thinking about the father he lost, the dairy farm he couldn’t save from bankruptcy, or his way of life that vanished with the rap of an auctioneer’s hammer. Cleaning up city folks’ trash at the Minnesota State Fair is just another dead-end job. But at the Fair, surrounded by a celebration of farm life, ambitions he’d given up on and buried deep start to revive. And seeing Mason Bell in the parade—gorgeous, gay, out-of-his-league Mason—stirs other buried dreams.

Mason left his hometown for college in Minneapolis without looking back. Student life is fun, classes are great, gay guys are easy to find, but it’s all a bit superficial. He’s at the State Fair parade route with his band when he realizes a scruffy maintenance worker is Luke, his secret high school crush. Luke should be safely home working on his dad’s farm, not picking up litter. Mason wishes he hadn’t fallen out of touch. He’s an optimist, though, and it’s never too late for second chances. Now he just has to convince Luke.

4✨s – After losing his father and the family farm, Luke has hit rock bottom. He’s sharing a small apartment with too many people, picking up trash at the local fair, and his future prospects aren’t looking good. The fair is money, but it also reminds him of everything he lost—and all the things he never believed he could have.

Mason is out and proud, working on his bright future, when he sees a familiar face from their hometown. Once upon a time, he tutored Luke in math and never forgot the presumably straight, hunky farm boy, even if he dressed for hard work instead of fashion.

Meeting up again when their lives are so disparate added just the right amount of angst to this little story. Watching them figure each other out, with Mason adding the much-needed encouragement Luke needed to follow his dreams, was just sweet. They were likable and lovable, the type of couple you want to root for.

I know nothing about Minnesota or farming, but the setting and details felt authentic. Both became part of the story, not just a backdrop or foil, which made this an excellent addition to the States of Love theme.

About Kaje Harper:
Kaje Harper’s first name may look exotic, but it’s pronounced just like “cage.” If she’s lost to the world reading a good book, you may have to say it a few times to get her attention. Her lifetime love affair with stories led to writing for fun at an early age, and after thirty-five years of solo scribbling, her husband convinced her it was time to try publishing. Since 2011 she has released over thirty M/M stories, including an Amazon best-selling contemporary romance and Rainbow Award novels in mystery, fantasy, and more.

Kaje loves telling stories of real, imperfect men finding love together amid all the challenges of life, but she’s also passionate about the value of Young Adult LGBTQ books for today’s teens. If she’s not reading or writing, you’ll find her moderating the Goodreads YA LGBT Books group, trying to connect readers of all ages with books that speak to them.

You can also find Kaje on Facebook (www.facebook.com/KajeHarper) or her website (kajeharper.wordpress.com) where she may be recommending her favorite M/M books, sharing stories about LGBTQ rights and information, or perhaps showing off pictures of her absurdly sweet little white dog.

Where to find Kaje Harper: