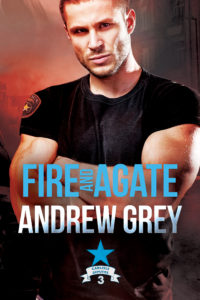 When Chris Anducci is moved off jail duty and into the sheriff’s office, he doesn’t expect his first assignment to be protecting a witness against a human trafficking ring. Knowing the new sheriff doesn’t abide screwups, Chris reluctantly agrees to work the case.

Pavle Kasun has spent the last four years of his life at the mercy of others. When an opportunity presented itself, he took it, resulting in his rescue. Now the safe houses he’s placed in are being threatened and he needs protection if he is to have any sort of chance at a life.

Chris opens his home to Pavle, but he doesn’t expect Pavle and his story to get under his skin… and stay there. Soon they discover they have more in common than either of them thought. Slowly Pavle comes out of his shell and Chris finds someone who touches his heart. But as the men looking for Pavle close in, they will stop at nothing to get him out of the way. But even if Chris can keep him safe, he might not be able to protect his heart if Pavle moves back home.

3.5✨s – The third book in the Carlisle Deputies series and though I enjoyed the story and the basis of it but for me there wasn’t much of a connection between the two main characters. Carlisle Deputy Chris is given the task of keeping Pavle safe, a man rescued from a human trafficking ring. He takes him into his home where he slowly learns what a truly remarkable young man he is, even with a language barrier making things that much harder. What they also have to worry about is that the people who bought Pavle are looking for him as he can identify his traders. This story can be hard to read in places with the things that Pavle had to go through but it never goes into details. I love the emotion and drama that Andrew’s writing gives you, there’s always a good story line that I enjoy, involving all of the characters. The story has a good pacing throughout, we’re not rushed through any scenes and especially with Pavle, he is given the time he needs to become settled, feeling safe and secure with Chris. It’s something admirable about Chris’s character is that he refuses to take advantage or push Pavle into something, always allowing the man to make his own decisions. It’s great that we get to have characters from the previous books in this series as well as a couple of men from the Carlisle Cops series. There’s a real family feel among the cops, Chris and Briggs work together to keep Pavle safe as well as track down those searching for him. Then we have Chris’s Nanna who is such an adorable woman, the nanna that every person should have. Strong, loving and always looking after you. A great thing is how well she connects with Pavle as both are from Siberia. It gives Pavle the chance to speak to someone who fully understands him which I think is important. Personally, this wasn’t the best book from the series but still worth reading, especially for those that enjoy Andrew’s stories and all of the Carlisle books so far. I received an ARC from the publisher in return for an honest review.

About Andrew Grey:
Andrew Grey is the author of nearly 100 works of Contemporary Gay Romantic fiction. After twenty-seven years in corporate America, he has now settled down in Central Pennsylvania with his husband, Dominic, and his laptop. An interesting ménage. Andrew grew up in western Michigan with a father who loved to tell stories and a mother who loved to read them. Since then he has lived throughout the country and traveled throughout the world. He is a recipient of the RWA Centennial Award, has a master’s degree from the University of Wisconsin-Milwaukee, and now writes full-time. Andrew’s hobbies include collecting antiques, gardening, and leaving his dirty dishes anywhere but in the sink (particularly when writing). He considers himself blessed with an accepting family, fantastic friends, and the world’s most supportive and loving partner. Andrew currently lives in beautiful, historic Carlisle, Pennsylvania.