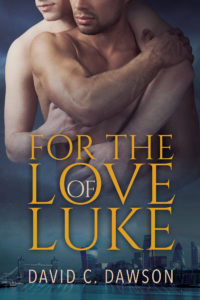 A handsome naked man. Unconscious on a bathroom floor.

He’s lost his memory, and someone’s out to kill him.

Who is the mysterious Luke?

British TV anchor and journalist Rupert Pendley-Evans doesn’t do long-term relationships. Nor does he do waifs and strays. But Luke is different. Luke is a talented American artist with a dark secret in his life.

When Rupert discovers Luke, he’s intrigued, and before he can stop himself, he’s in love. The aristocratic Rupert is an ambitious TV reporter with a nose for a story and a talent for uncovering the truth. As he falls deeper in love with Luke, he discovers the reason for Luke’s amnesia. And the explanation puts them both in mortal danger.

3.5✨s – I really enjoyed this entertaining suspense from a new-to-me author, featuring a BBC journalist and a mysterious American artist. Rupert finds his upstairs neighbor injured, after overflowing water collapses his bedroom ceiling. In the aftermath, Luke offers his spare room while Rupert’s apartment undergoes repairs. Luke explains his amnesia but Rupert can’t see how that accounts for his odd behavior and reactions to specific stimulus. Rupert’s job has him investigating a number of recent suicides of young men using the same methods and sharing similar characteristics. The mystery around Luke deepens further when Rupert is accosted on the street and warned to stay away from him. There is enough divulged in the narrative to make a solid guess as to how these events connect but the who and why are slower to unfold.

I liked the characters individually, although Luke was difficult to fully comprehend, since amnesia precluded any background, until later in the book when the third person perspective switches from Rupert to Luke. It’s just a few chapters but was very effective in fleshing him out more fully, making him even more empathetic. The romance and relationship development felt a bit awkward, although some was caused by Luke’s issues and seemed too rushed for declarations of love. Note for the heat seekers; there are few sex scenes, mostly fade to…grey, I guess? Only the start of a couple scenes are shown with just one complete later in the narrative. Secondary players like Sandra, Rupert’s brash but caring photo editor and his parents were all perfect foils to Rupert’s occasionally pretentious mannerisms. I can’t say I liked him much at times but he displayed consistent characterization. The author’s descriptions and depictions of different areas in and around London were immersive.

The mystery wasn’t the most puzzling plot I’ve ever read and seemed almost preposterous in one sense yet was still based on chilling facts about extreme homophobia. There was nothing graphic or gruesome, which I appreciated. Tension and conflict ramp up the anticipation and suspense before the resolution, leading to a decidedly happy ending. British mysteries were some of my earliest reading and this took me back to those enjoyable times. I will sample more of Mr. Dawson’s work as this book was a very satisfactory escape and an intriguing whodunnit.

About David C. Dawson:
David C Dawson writes contemporary thrillers with gay heroes in love at their core. His third book is For the Love of Luke, a romantic suspense about an American who falls in love with a British man in London.

David’s debut novel The Necessary Deaths, published by DSP Publications, has been described as “a real page turner”. It won Bronze for Best Mystery & Suspense in the FAPA awards. Rainbow Reviews said it was “an exciting read with complex characters”.

He wrote a short story about a chance encounter with George Clooney for the anthology Love Wins, published here by Dreamspinner Press.

David worked for the BBC as a journalist. He lives near Oxford in the UK, with his ageing Triumph motorbike and two cats.

Where to find David C. Dawson: