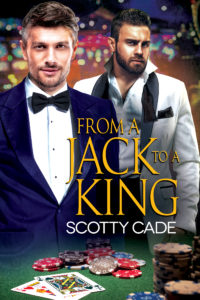 New York Times best-selling mystery writer Bay Whitman leads the life of a celebrity—at least on the surface. In public he’s self-assured and in control. Women hang on his every word, while men envy his confidence and swagger. But in reality, Bay is a loner. He’s shy and introverted, and his life consists of sitting in a dimly lit room writing his famous Jack Robbins mystery novels. His one vice—gambling. Winning an escort in a poker game will change Bay’s life in ways he never imagined.

Matthew “King” Slater is one of the hottest tickets in gay porn. He spends his days in front of the camera and his nights as a highly paid escort to the rich and famous. Deep down, he craves romance and a real connection, but his past makes it hard to separate the needs of his body from those of his heart. For now, it’s easier to think of sex as just a job. But while doing a shoot in Vegas, King is hired for a tryst at a famous hotel and casino, and his handsome client might blur the line between work and play.

3.5✨s – The setup of a lonely, introverted author and a out and proud porn star looking for love is one I couldn’t pass up. Bay writes the Jack Robbins mystery novels and he adopts Jack’s personality in order to go on book tours. It’s the complete antithesis of how he sees himself, but as we learn, it’s not so far from reality after all. His one big enjoyment in life besides writing is poker and while on a book stomp in Vegas, he takes part in several high stakes games. The first of which nets him a prize he could have never predicted. King Slater…porn star and a real Jack Robbins come to life.

I swooned right along with Bay, but that early meet cute didn’t hold the rest of the book. Both men have a lot to work through individually and the immediate attraction they feel for one another leaves them floundering and what transpires is at times awkward and sweet, strange and romantic, and then kind of iffy. For two men with so many personal demons, there were a lot of unnecessary outside influences, and the big misunderstanding was blown way out of proportion.

But…I wanted the boy to get the boy, just as Scotty promises, and I’m not sorry I took the journey with them.

About Scotty Cade:
Scotty Cade is the author of over twenty gay romance novels published by Dreamspinner Press. He left Corporate America and twenty-five years of Marketing and Public Relations behind to buy an Inn & Restaurant on the island of Martha’s Vineyard with his partner of twenty years. He started writing stories as soon as he could read, but only seven years ago for publication. When not at the Inn, you can find him on the bow of his boat writing with his Shetland sheepdog Mavis at his side. Being from the south and a lover of commitment and fidelity, most of his characters find their way to long healthy relationships, however long it takes them to get there. He believes that in the end, the boy should always get the boy.

Where to find Scotty Cade: