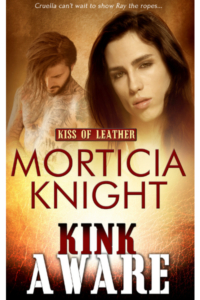 Working at Rogue Ink is a dream job for Cruella, especially being around the hunky co-owner, Ray. Even though the money isn’t great, the eye candy and Ray’s caring heart make it all worthwhile. When Cruella risks rejection by inviting Ray to be their partner for a shibari class at Kiss of Leather, they’re thrilled when Ray accepts.

Cruella’s invitation both excites and terrifies Ray. He wants Cruella, but does he also want to become more kink aware? Still, he could kick himself for not already making a move on the sweet and beautiful Cruella, so maybe this is his chance. His protective instincts have gotten him into serious trouble before, so he’ll be sure not to make the same mistake with Cruella. They’ve made it clear they can take care of themself.

Cruella fears that Ray won’t accept their genderqueer identity and Ray aches to be the strong man Cruella needs. However, when Cruella’s dark past intrudes on their blissful present, Ray’s definition of strength might turn out to be harsher than Cruella is willing to accept.

Reader Advisory: This book contains a brief scene of violence, references to eating disorders and the mention of a past abusive relationship.

4✨s – Like many Kiss of Leather fans, I’ve been eagerly awaiting Cruella’s story and we open right in the middle of a maybe, possibly, will they say yes moment that is all the cute you could ask for, with nerves showing on both sides, and I settled in to fall in love.

Ray is part owner of the tattoo parlor. A burly, bearded, sensitive man who longs to do everything right. I wouldn’t say he’s a people pleaser, but he’s very much a Cruella pleaser. Every thought is with them in mind. Will he say the right thing, do the right thing, how can he avoid messing up—all so he doesn’t push them away, hurt them…the list goes on. He’s seen their bruises, he knows they’ve been in an abusive relationship before, and all he wants to be is their perfect partner. As the pair explore Shibari and then other aspects of Ray’s burgeoning submission, this need to please becomes amplified to the point that I worried for him.

Determined to prove they are strong, capable, independent, and, eventually, in charge, Cruella is the character I was expecting to root for. I wanted to see them triumph over their past and while that happens, I felt that in a lot of ways, it was at Ray’s expense. Trust me, I wasn’t expecting to have that reaction either. These two characters are so new to the D/s side of things, and the angst of Cruella’s past being flayed against Ray’s devotion made me question if they were ready for such a step.

I always say a good book is one that makes me feel and this one did in spades—between the rollercoaster of emotion to the author’s attention to Cruella’s genderqueer identity to the depth of the Shibari scenes. There were cameo’s from beloved series characters, a surprise announcement, and hope for the future. Fans of the series will not be disappointed.

About Morticia Knight:
Author Morticia Knight spends most of her nights writing about men loving men forever after. If there happens to be some friendly bondage or floggings involved, she doesn’t begrudge her characters whatever their filthy little heart’s desire. Even though she’s been crafting her naughty tales for more years than she’d like to share – her adventures as a published author began in 2011. Since then, she’s been fortunate enough to have several books on bestseller lists along with three series’ titles receiving recognition in the Rainbow Book Awards. Once upon a time, she was the lead singer in an indie rock band that toured the West Coast and charted on U.S. college radio. She currently resides on the northern Oregon coast and when she’s not fantasizing about hot men she takes walks along the ocean and annoys the local Karaoke bar patrons.

Where to find Morticia Knight: