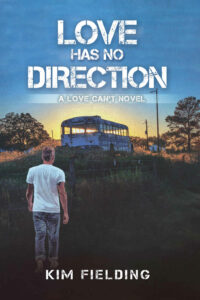 Yet another series of poor decisions lands Parker Levin back in his mother’s house, working at her coffee shop, and feeling like a failure. Then he learns his ex-boyfriend has died by suicide and things go from bad to worse. When he meets a handsome stranger, he doesn’t have much left to lose.

Ten years ago Wesley Anker made a grave mistake. Since then he’s lived in near isolation, supporting himself by making custom furniture and only rarely connecting with other people. When he attempts to make amends, he encounters Parker, a beautiful and colorful young man, and he agrees to Parker’s impulsive request to join him.

Together, Parker and Wes find quick friendship and fierce attraction. But Wes’s past demons haunt his footsteps, and Parker’s struggle to plan a future has him stumbling through life. Then they uncover evidence that suggests Parker’s ex’s death might not have been a straightforward suicide, and every path seems to lead to dead ends and destruction. Can Parker and Wes find their way to lasting love when the route is hidden?

4✨s by Abrianna
This is a book about self-discovery. It’s hurt/comfort and features two men who are lost and going through the motions until they find someone who turns their world upside down. Parker and Wes are both scarred from past mistakes and when they form their tentative friendship they don’t expect anything more than finding an ally. Someone who understands what it means to be alone, to have a weight hanging over their head.

Parker and Wes have to fight for their love as they both have things to overcome. This book has a lot of healing in it. It has two men who have deep wells of hurt and it weaves a story about how they find their strength again. It’s not easy, they both stumble so many times, but the fact that they get up, again and again, is what makes me admire them. They understand what they need to do to get to where they want to be in life. They might need some help figuring out how to take those first steps, but it’s easy to see that the characters are well equipped to handle whatever life throws at them. Especially once they have a chance to believe in themselves.
The author doesn’t use love as a fix. Their relationship helps push them in the right direction, as they both have unwavering support in their corner, but their love survives because they find their individual strength and learn how to stand on their own so that they can stand together.

This book is very well-written and the characters are so much fun. Both of them have quirks that are endearing. I haven’t read the other books in this series but now I am going to backtrack because I know that this author doesn’t pull any punches and I’m interested to see how the secondary characters got to where they are. Especially knowing what I do thanks to Wes and his side of things.

About the Kim Fielding
I have lived in Illinois, Oregon, Nebraska, and Croatia, but for a long time now I’ve called the boring part of California home. I have a husband, two daughters, a day job as a university professor, and a passion for travel. I write in many genres–contemporary, fantasy, paranormal, historical–but no matter when and where my stories are set, I love complex worlds and complicated characters. I think that often it’s a person’s flaws that make him stronger and more beautiful.