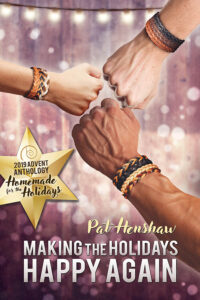 Blacksmith Butch has secretly loved his best friend, science nerd Jimmy, since grade school. Now their shops in Old Town Seven Winds, California, are only doors from each other.

They’re about to turn thirty, and Butch refuses to wait another day to make a decision: propose to Jimmy and start the family he’s always wanted or forget his dream to avoid risking their friendship.

Why can’t the choice be as easy as creating decorative ironwork in his forge?

Excerpt:
“Okay, what’s up?” I sat on the bench with my back against the bricks at the Old Time Pub. “You’ve been pissed since last week.”

My best friend and secret love of my life Jimmy glared but didn’t answer. We’d known each other for so long that I waited him out like usual. I crossed my pumped arms and sat back, smelling my sweat-soaked T-shirt in the AC blowing around us.

The past summer in Seven Winds, once a Gold Rush town in California’s northern Sierra Nevada mountains and now a tourist trap, had been brutal. A record number of days over one hundred degrees had turned a lot of the shop owners into snarling dogs.

As the resident blacksmith, I took the heat as business as usual. So I was hot and sweaty? I was always hot and sweaty. The day I ain’t I was either sick or dead.

I figured Jimmy’s problem was more than the heat though. He’d been acting funny lately. Like he had something caught in his craw but he couldn’t spit it out.

Jimmy wasn’t looking at me, but down at his hands. They was long and thin, completely different from mine. I had a collection of burns and scratches, scars from the forge and the tools and all.

His hands was pale white with a bunch of freckles that went with the freckles all over the rest of his body. When we was kids, the tiny red hairs on his arms stood out almost more than his carroty hair. The bright red had changed as he got older and was now more muted. Me? I’d stayed hairy brown all over.

I tapped his hand with my blunt fingers.

“Whatever it is, you know you can just spit it out.”

He stared at me, and I swear his green eyes got darker. He was making me uneasy. What the hell was wrong?

“You ever look at your life, Butch, and ask yourself, ‘Is this all there is?’” He sighed. What the fuck? What had gotten into him? “Don’t give me that look. You’ve got to know what I’m talking about.”

“Sure. But you know me. Something’s wrong, I make it right.” Takes me time but I figure it out eventually. “So, uh, what’s wrong with your life?” I wanted to make a joke and laugh, but he was too damned serious. And Jimmy’s never this serious.

“I mean, look at us. We work all day in our shops. We make good money. We got nothing to spend it on but ourselves. We go out drinking with the guys on the weekends. Or we go into the city to a game. Or we go fishing, camping, riding around.” He shook his head. “But in the end, what have we got?”

“Fun. Friendship. I don’t know. Life?” It wasn’t much of an answer. I knew where he was coming from. I figured it was because we was about to turn thirty after Christmas and it was time for us to grow up. I’d been thinking on it a lot lately.

“Don’t you want something else, Butch? Something more? Something better?” He sounded desperate, like he was drowning and I wasn’t saving him.

“Yeah, sure. I guess. I mean, I want a husband, a house, a dog, you know, stuff like we talked about when we was kids.” I’d had it mostly planned out. I’d been saving my money.

I was surprised Jimmy hadn’t already figured it out. He was usually two steps ahead of me in everything. “Okay, I gotta ask. What brought all of this on? What happened?”

He shrugged. “I don’t know. I’ve been sitting around thinking lately. And mom’s been on me to move out.”

His mother Hazel’s a character. She’s an old hippie with graying auburn hair and grass green eyes. Her face is a roadmap of lines cuz she spends so much time outdoors. And she worries. She thinks we need her to run our lives. We mostly let her think that even though it’s not true.

“She says she wants me to move out of the farmhouse.” Jimmy said it like it was a death sentence.

“So? Isn’t that what you always wanted to do?”

“Jimmy, you’ve always talked about living in your own place.”

Once I thought me and him would get together, and, you know, live happily ever after. But then he became a doctor of chemistry and natural medicine. I never finished high school.

“Yes, I know. You’re right. I’ve wanted to move out for a while now.” Jimmy sighed. “But this feels like her trying to push me out. I don’t like to be pushed.”

“I don’t get the problem. You know what you want already.”

He laughed. “I don’t like to be pushed by my mother.”

“So the Apple Festival is coming up, and I’m making some changes,” I said, moving on to another subject.

He looked at me weird.

“I don’t get it, Butch. This isn’t like you.” He ran a hand through his shaggy hair. “You’re making me nervous. First my mother, now you. Why is everybody so hot to change suddenly?”

“It’s like you said.” I hunkered down, putting my elbows on the table and spreading out my hands. “I took a look at my life. I figure if I don’t do something to get settled, it ain’t gonna just fall in my lap. The Big Three Oh is the first step to the rest of my life. If I don’t get my shit together, nobody’s gonna hand my life to me. I may not know everything, but I know it’s up to me to do it myself.” I shot him a frown. “And you know it too.”

I may not have solved his problem of moving out or nothing like that, but maybe we was finally on the same page. Maybe.

I was making changes. He had to decide on his own life.

4✨s by Jessie
As Butch and Jimmy stare down the dreaded 3-0 they are both thinking the same thing: time to settle down, pitch that picket fence, and build a family. Both are successful businessmen, have a good group of friends, and only want each other to be happy. Between Butch’s belief that he’s not good enough for the more cerebral Jimmy and a possible romance between Jimmy and Butch’s new employee, it just doesn’t seem that they’ll find it together.

I do love a good friends-to-lovers romance, especially long-time friends who are oblivious to each other’s unrequited feelings. As a novella, I needed a little more focus on Butch and Jimmy together and less on the hectic holiday sales season which had taken over both their lives and this book. Also, the set up of the little boy who visits the forge had me thinking in one direction and while his outcome was adorable, I was kind of disappointed that he wasn’t rounding out that family picture.

Overall, another cute story from an author who never fails to bring the sweet feels.

About the Pat Henshaw

She wants you to remember: Every day is a good day for romance!