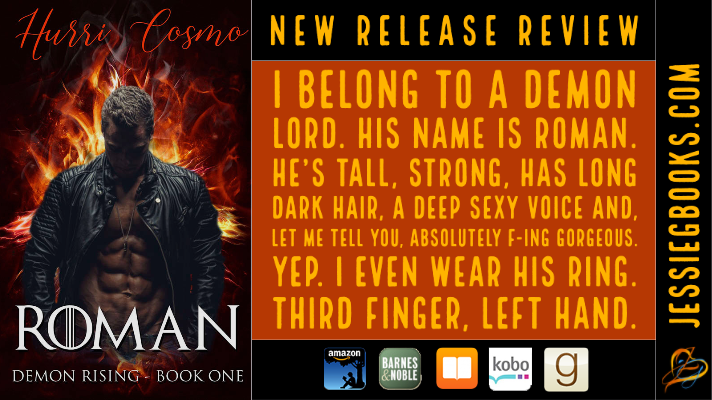 I belong to a Demon Lord. His name is Roman. He’s tall, strong, has long dark hair, a deep sexy voice and, let me tell you, absolutely f-ing gorgeous. Yep. I even wear his ring. Third finger, left hand.

Except – it’s not a wedding band. Far from it, actually. It simply means I’m his submissive.

Well – it doesn’t really mean that either, although I wish it did.

No. The ring’s function is only to give me “sight”. Being human, once I had it on, I could suddenly see Roman’s stupid lost legions; very nasty scary things that would as soon kill me as look at me. And because I wear the ring, guess what? It’s now my job to recapture all those creatures for him. Yay me, right?

At least I get to be close to Roman… sometimes.

But, to tell you the truth, I was tricked into putting this damn ring on by Cathy, some random woman I met at a park, who unfortunately likes Roman, too. A whole lot. She brazenly flirts with the demon every chance she gets and right in front of me, too. Crap, it pisses me off. In fact, she brags she was the one who found me, got the ring on me and then offered me up to Roman like I was a T-bone steak or something.

However, there’s something else going on. Something big. Because there’s another gorgeous Demon Lord in our little earth realm and he will stop at nothing to capture Roman’s loose legions for himself. Not only that, seems he’s out to catch me, as well.

Huh. My name is Micah and things just got very interesting.

4✨ by Abrianna
I found this book to be fun. Micah is hilarious and his humor is what helped him navigate the new, sometimes crazy and scary world he found himself in because he was tricked into wearing a demon’s ring. I liked how different this book was in the fact that Micah had to round up all the loose legions.

There’s some suspense and while it wasn’t really up to par with what I wanted there to be the book made up for it with its dynamic characters. Everyone from Cathy, to Micah, to Roman was well-written and you can feel the bonds running through them even when they were at each other’s throats. There’s a lot of humor and a lot of situations that only could happen to Micah. There was a bit cliche in the fact that there’s something special about him and that’s why everyone seems to be after him, but it was handled well enough that I didn’t feel like it was too predictable. You could tell that the author worked hard on keeping things as fresh as possible, which I was thankful for.

Since this is a series I’m hoping we get to see the characters evolve and develop from here because they made great progress in this book and I want to see where they go. The author is clearly talented, they did a lot of world-building that was almost seamless in its execution. The only places this series can go is up if the author keeps up with the tone and themes they’ve used in this first book. There’s so much that can happen in this world I’m curious to see where it goes

About the Hurri Cosmo
Hi, my name is Hurri Cosmo and I am a happy ending junkie. I always have been. You can be
pretty rest assured everything I write will have one. I am not big on angst. I believe we get
enough of that in real life so when I go to read something, to make the real world go away for
awhile, I will most likely not chose something that will make me cry.

So I write for those people who, at least occasionally, feel the same way. I’m okay with the fact I
will probably never write anything “important” but I guess I will have to see where my
imagination takes me. I would love it if you would come along.

Contest:
Hurri is giving away a $20 Amazon gift certificate with this tour. Enter via Rafflecopter for a
chance to win:

Non-Exclusive Excerpt
“What? You’re kidding, right?” Micah fully turned to the woman. “This took place over seventy-five years ago. How is it this guy is still alive, not to mention that no one has ever heard this story? Or seen those monsters before now? How could he not unlock the doors? Why would there be a lock on those doors in the first place? A big hall like that? Cathy, none of this is making sense.”

She laughed bitterly. “Yeah, but what you’re seeing outside is? I’m telling you the truth.”

“Okay, you have a point, but what it seems to me you’re telling me is some made up concoction that covers up the truth.” Her eyes narrow in anger. “But, let’s say I believe you. What does he have to do with this? What is this ‘passing on of the talent’ shit and that… that ring have to do with all of this?” They were interrupted again with a loud crashing sound. It was still outside but it was clear what they were trying to do. “Look, Cathy, kudos to your circle and all but I would feel a lot better if we were able to get away altogether from those… whatever they are out there. Somehow, we need to get back to my car. Any ideas?”

She glared at him, obviously hurt by, first, him not going all jelly and drama with her story and, then, with his distrust in her hastily poured salt circle. Then something clicked behind those big brown doe-like eyes. “Actually, there’s a tunnel. It goes back…” She seemed to stop to think. “Oh. To the park. It goes to the park. Well, I mean, it goes to the sewer system and you can get to the park by it.”

Micah did laugh this time. “A tunnel? For real? Dark and dank, just like in all those slasher movies? Man, I did not see that coming. Although I admit, I should have.” He laughed again.

“It’ll all make sense, I promise. There’s so much more to tell you.”

“Oh, believe me, none of this is ever going to make any sense. But don’t worry. I’ll still listen to your story as soon as we get away from here. I suppose the entrance to this tunnel is in the basement?” She sighed, then nodded. “Perfect. Just fucking perfect.” He rose to his feet just as the shuffling noises increased, this time the sounds of crackling wood joined in. He found himself questioning the intelligence of these demons. Wouldn’t it be far easier to come through a window instead of a wall? “Lead away.”

It was an old house. Old houses had scary, smelly basements. The stairs were always narrow and creaky and there was ever only that one naked light bulb hung on a thin wire that once you pulled on the chain to turn it on, it pushed out only enough light to define the deep shadows, not chase them away. It would also swing on that thin wire making those deep shadows move with a life of their own. Common sense told you it was nothing, your fiercely beating heart told you it was every ghost and goblin from your childhood come to steal your soul.

Cathy had grabbed a flashlight, an indication the basement itself was going to be their first challenge, and when they reached the bottom of the stairs, she turned it on. The shadows scattered like leaves before a storm. It felt almost powerful; like it released some kind of energy with its beam. He shook his head. The only powerful thing in this basement right now was his imagination. He stuck close behind Cathy as she moved haltingly toward a far wall. Micah gazed up at that wall trying to see a door or an opening, but he saw nothing. Possibly the tunnel was hidden and would only open to those who knew which brick to push. Maybe the wall itself was an illusion. You simply walked right through. Perhaps that wall was not where she was going.

It might even be she brought me down here to murder me and eat my beating heart.

Crap. Get a hold of yourself, you idiot.

She stopped in the middle of the floor and swung the light around as if looking for something.

Are you kidding me?

“You… you do know where this tunnel is, don’t you?”

“Well, not really. I’ve never used it. I only know it exists.” She swung the light back fast, again making the shadows dance. Micah had a feeling the shadows did not like to dance.

“Give me that thing.” He grabbed the flashlight from her and stepped in front, moving the beam of light slowly this time along the walls. There. Right there. Micah spotted an indent in the wall. He walked quickly over to it, trying hard to ignore the fact that several small, and maybe some not so small, animals skittered across the floor at his approach, the light and his eye just catching the movement, not the actual sight of any of them.

Oh man. This was sooo not good.

But the light did illuminate that indent in the wall and, hallelujah, yes indeed, this was a door. He handed the flashlight to Cathy and reached out to the recessed handle, sticking his hand into the ugly hole, feeling ancient spider webs bar his way. He swallowed hard but pushed through, grabbing the cold metal of the handle and twisted it. It screamed, metal against metal, but it turned, and he felt it release the door as the plunger inched back. Keeping a hold on the handle he pulled, but the door didn’t move. “Shit.” He knew on some level that was what would happen. He absolutely knew the door would be stuck and they would be trapped down here, like rats. The flesh-hungry zombies, dressed like school children, would lumber down the stairs and…

Just as he was about to finish that gruesome and bloody fantasy in his head, there was a crash upstairs.

Demons were in the house.